Trade DAY and then some

Well, first things first. This week I am still looking to make trades for all "subset"/inserts Diamond Kings (not just the Braves). Not the actual Diamond Kings product set.  Also looking to pad the birthday binders.

These are all of the baseball players with 9/16 birthdays,  there are apx. 20 players that do not have any cards. That said, let's move on to the  "and then some"

The other day I mentioned about a huge 5,000 card pick up that I grabbed on Sunday.  I finally made it down to 2 of the local flea markets. Spent $5 at the first one no cards, just movies, a Dale Earnhardt Jr glass for a friend of mine (she's cute btw), and a Chipper Jones mini bobble head (that I owned one already, but the guy threw it in with the glass. Oh yeah, and a 2004 Braves ticket stub.

At first I wasn't going to go to the other market, but it was just a 1/2 down the road, so I went. I am glad I did. I will posting (extra tidbits) from the 16 partial sets that I picked up for the next 4-5 months. LOL.  I have scanned a lot already for Wacky Wednesdays, should be enough to last a month or two all by themselves. I was able to add many mini collection hits too, which you will see over time, maybe, lol again. 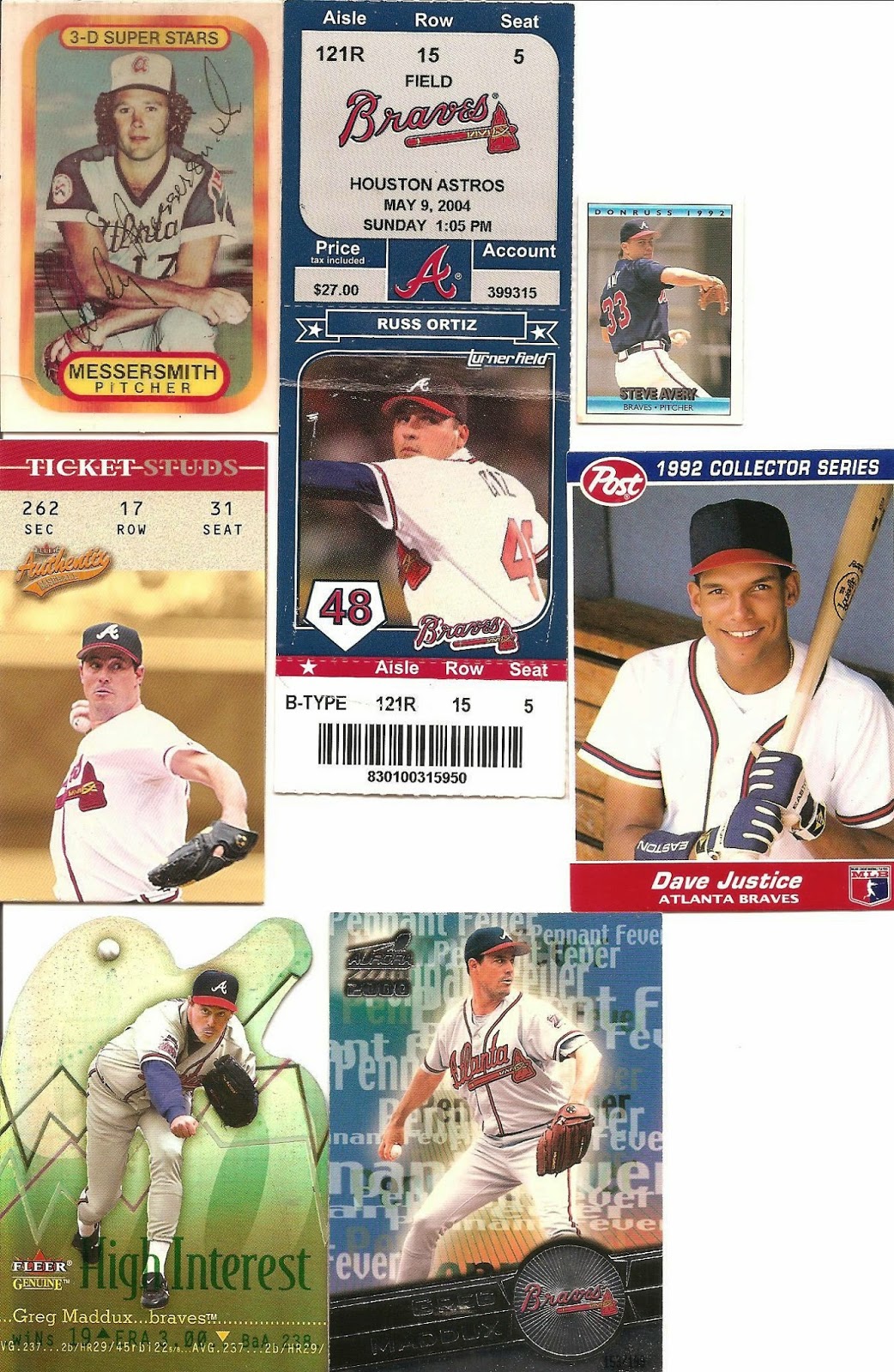 There is that ticket stub that came from the first market. These are the inserts/oddball Braves (that I needed). Nice Kelloggs, micro mini, and just the Maddux inserts alone book for what I paid for the entire 5,000+ lot!!!!    $20.00..... Below you will find the rest of the Braves cards that I got and needed. 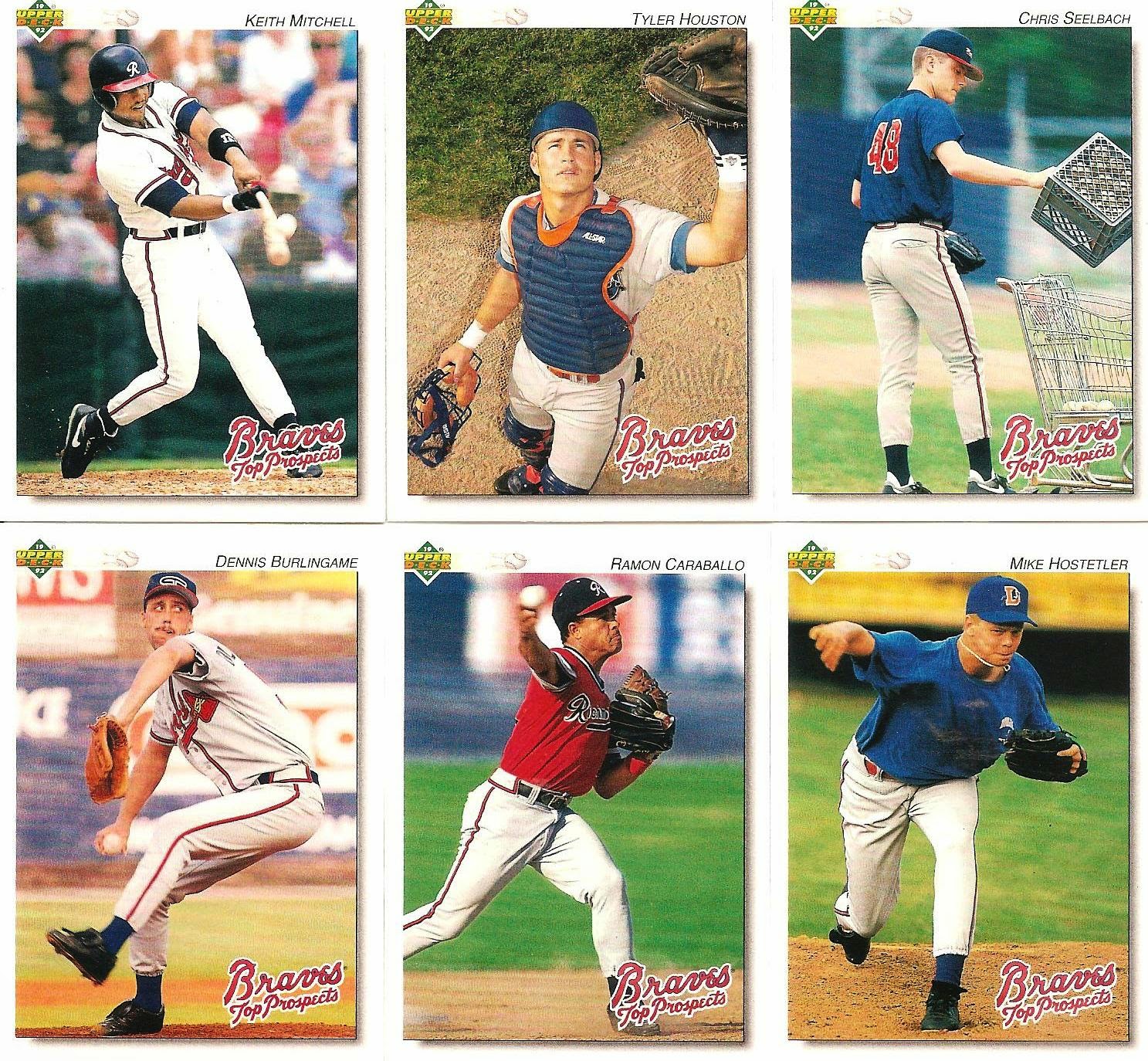 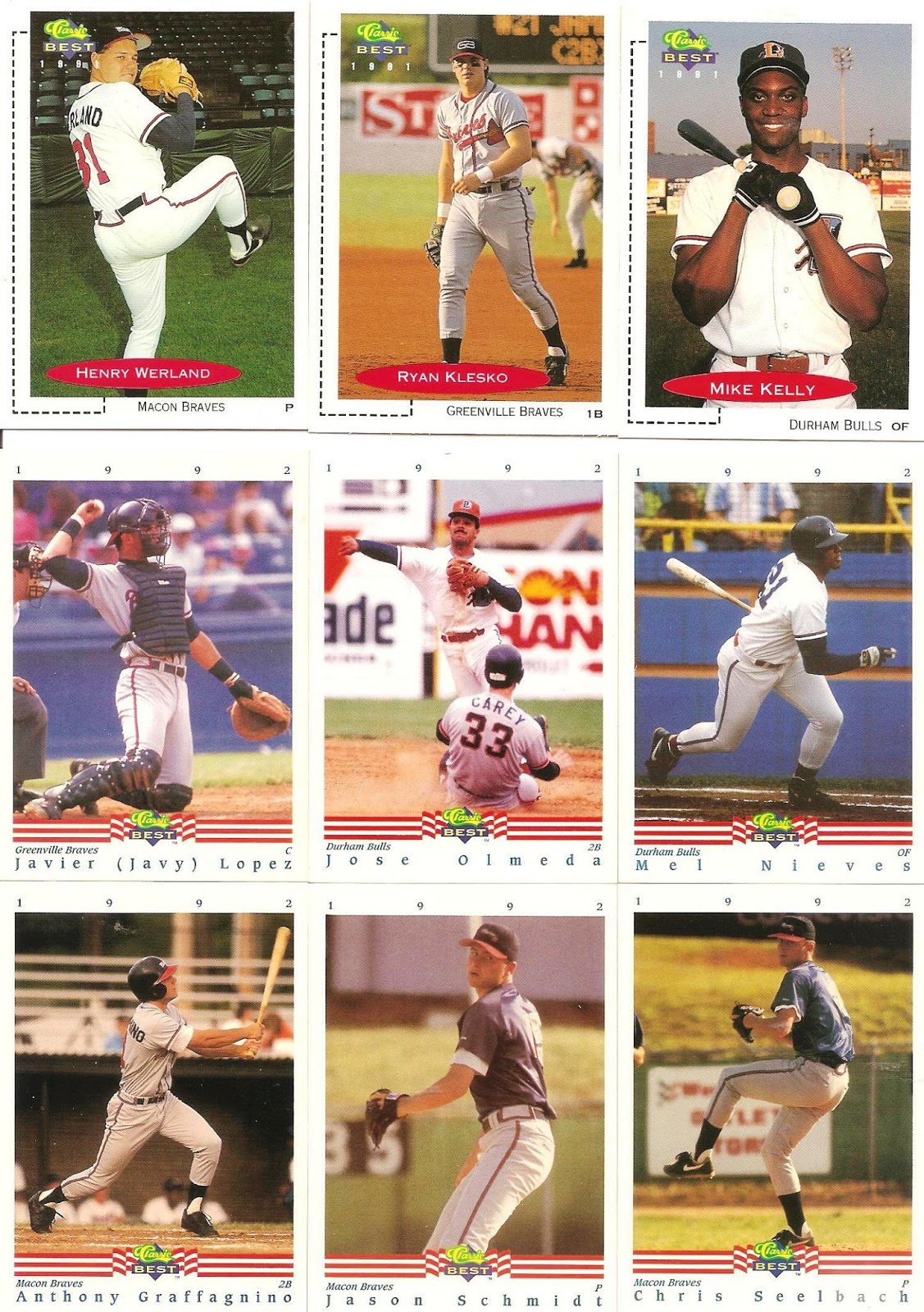 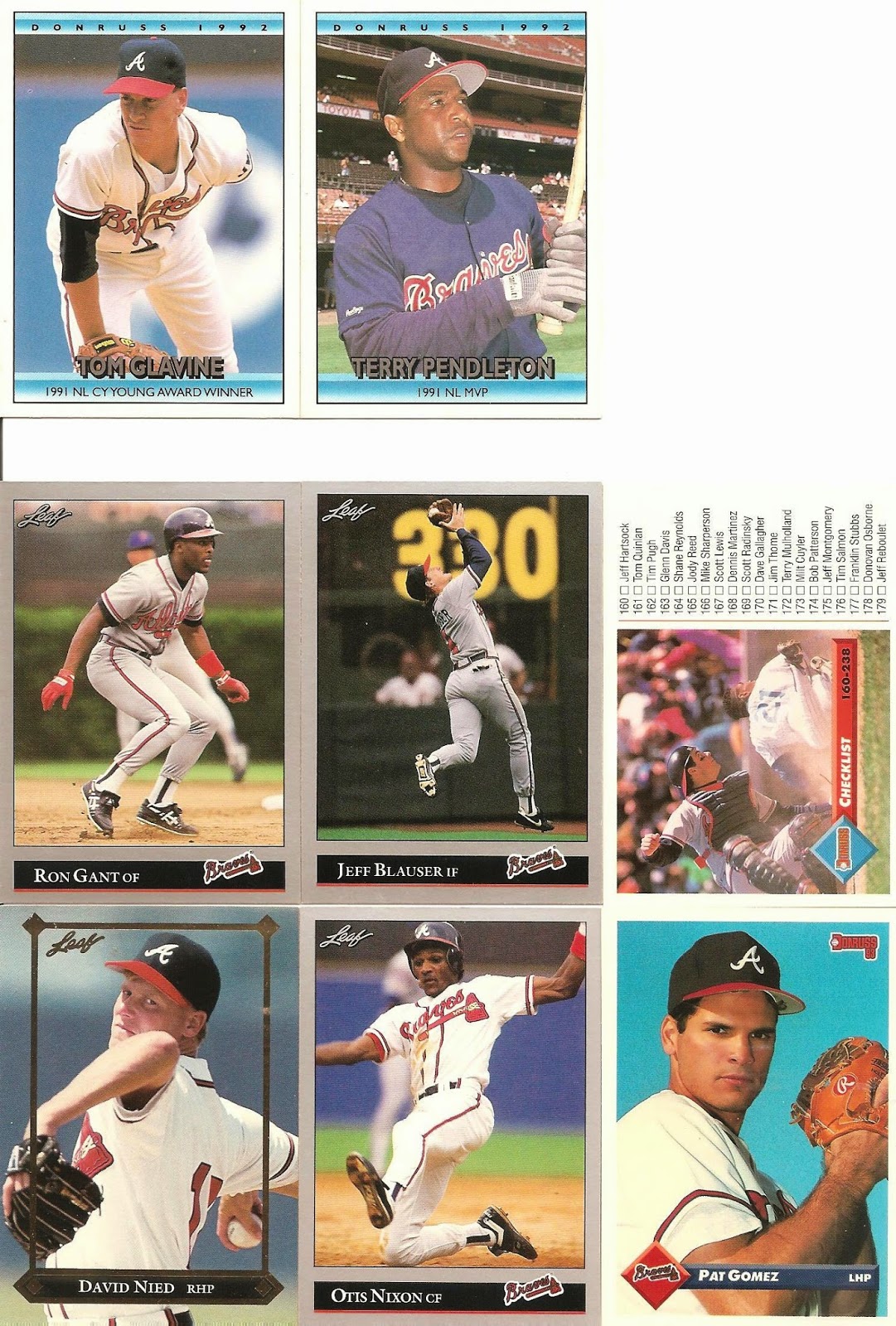 Technically the 2 1992 Donruss are inserts or Bonus cards, but I needed them. 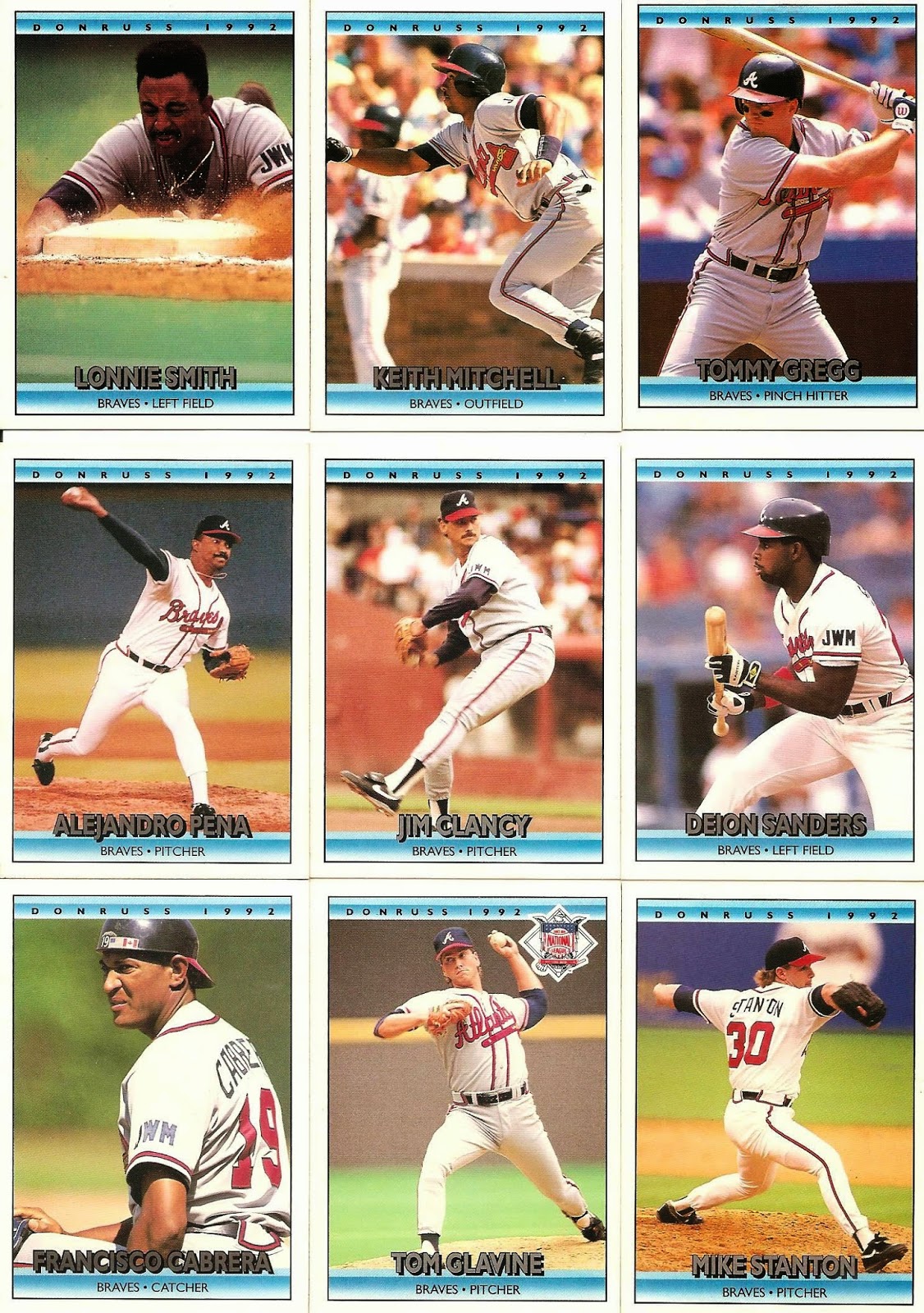 The missing 1992 Donruss which I think may now be complete, but I still need to verify that. Hey there's another bunt card too. 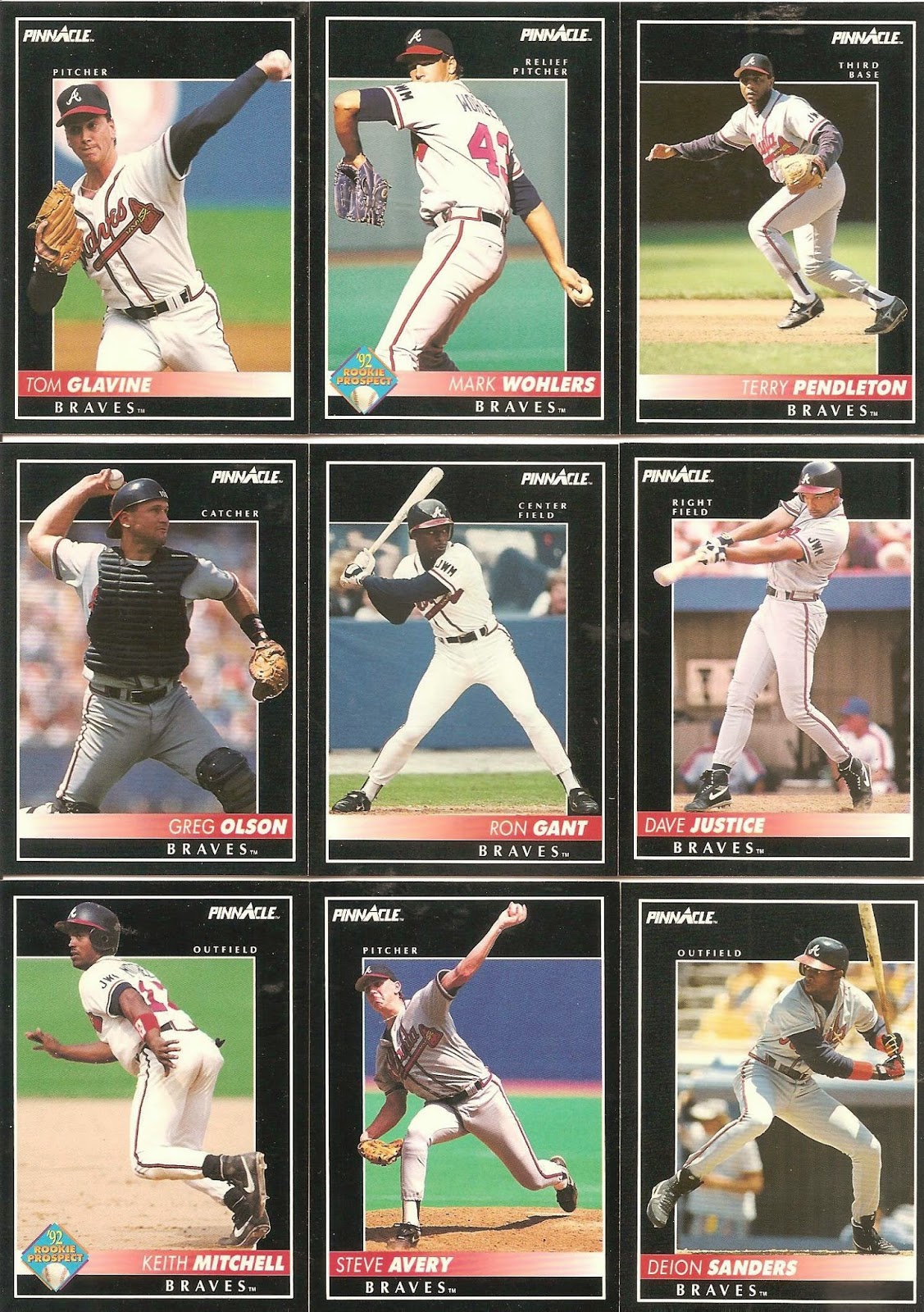 A little 1992 Pinnacle stack of Braves.

A few from Score. 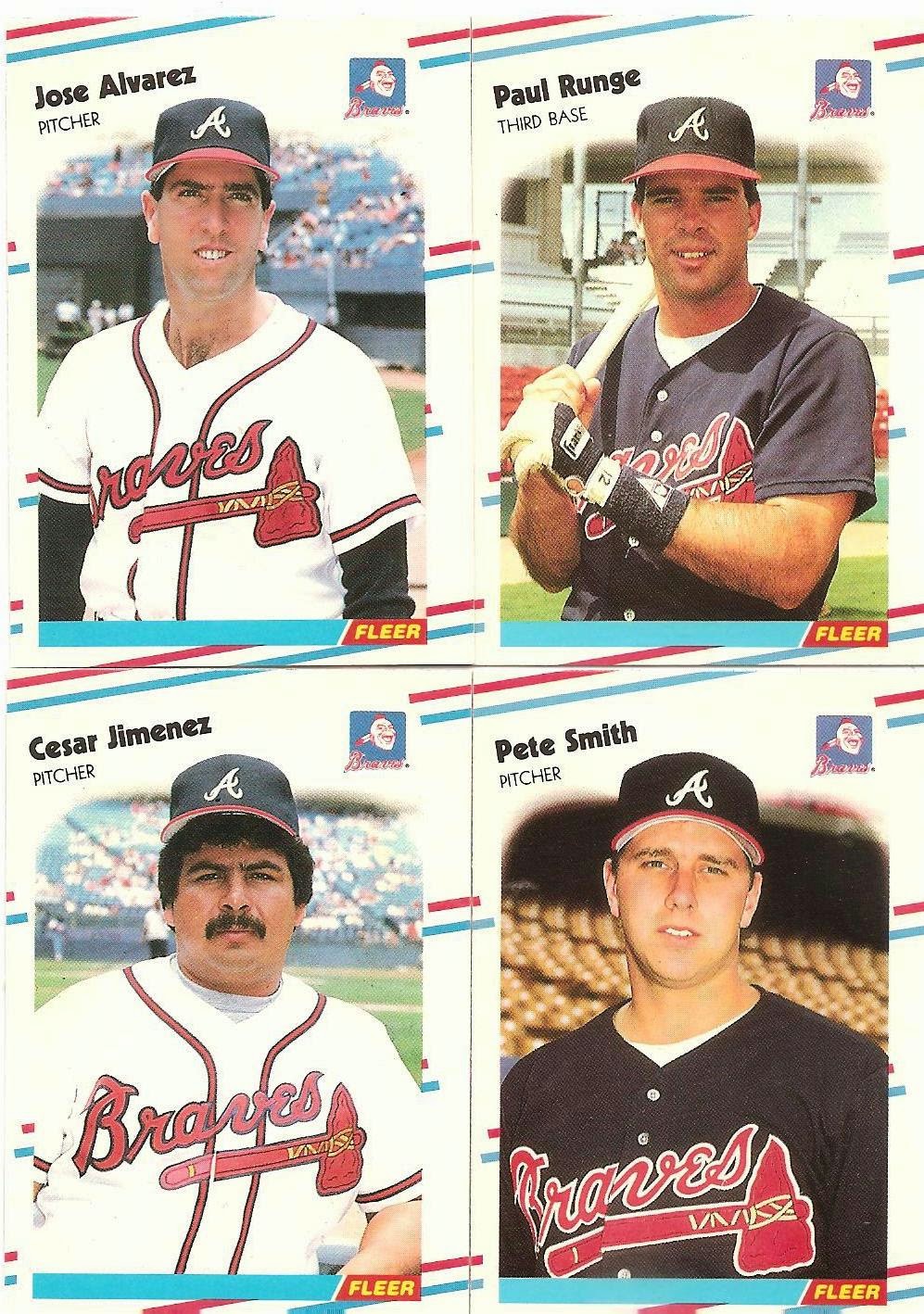 1988 Fleer Update (I got the set minus 2 cards). That Jimenez card made it all the way into Binder #1, I didn't even know it/he existed. 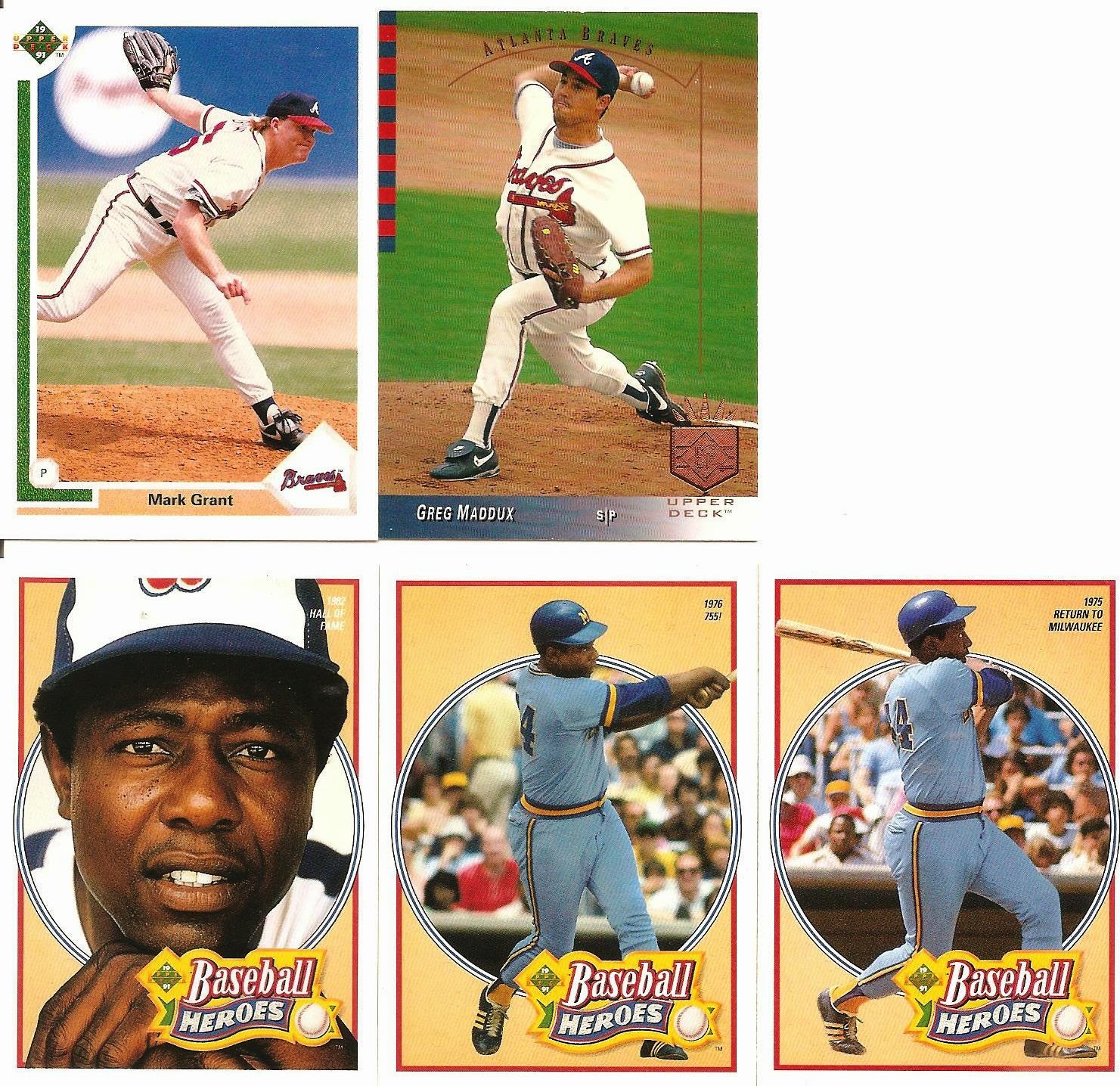 Yes, the Hank Aaron cards are really inserts too, but I keep them with set. Those 3 double what I had. 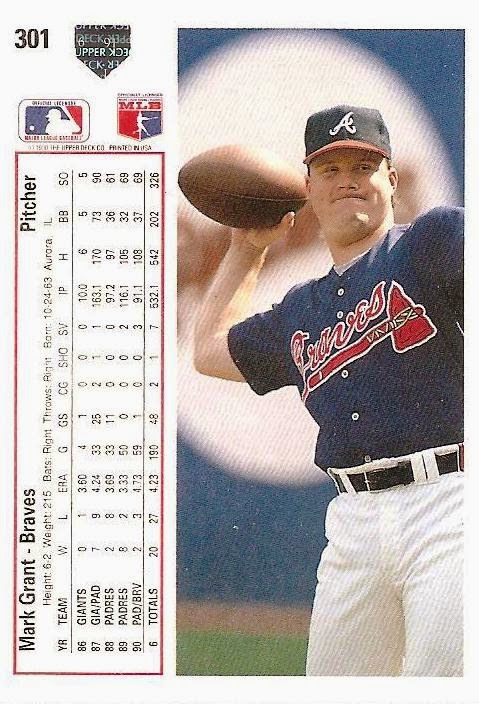 For some strange reason I felt like scanning the back of this card. You know it is funny how things work out, what you have seen already would make the $20 seem like a good deal, but I would have to say tonights' scans make up about .005% or 1/2 of 1% of what I got.

Back in the day when my collection of strictly baseball cards was well over a million cards (the NOW ex-wife made me change up things quite a bit and I got out of collecting eventually (around 2005). No baseball cards left at that time other than some Mickey Mantles that I could not part with then, and a T206 card, just John Elway (which was her idea). He was her favorite football player (she is the Bronco's fan, not me I root for the Buccaneers! Argh!!! Long story short, I had sent thousands of Braves cards to a girl cousin of mine who had a super major Chipper crush. So no Braves until a a few months back.  I filed (yes I did) for divorce back in November 2006. Still decided to stay on the collecting hiatus.

People really shouldn't try to change people (doesn't work very well). Anyways,
Now that 3/4 of my children are grown, I started to poke my way back into the cards. After trading/selling nearly all of my baseball cards, I decided to just continue on with the "Elway Super Collection", joined a few sites, etc.  yadda yadda. Eventually, finding Nick's (dimebox) blog, he fired me up and that my friends is how I got back into collecting. When, you have as many unique Elways as I have it makes it hard "sometimes" to make trades and I had decided to not spend much on cards. So I scooped up every huge deal I could get for cheap. I picked up 100K in cards in no time. I found the need to expand my wants. Started focusing on baseball specifically Braves. And low and behold it is so easy to trade cards now. Although I really do need to spend some time on the Elway blog, I have abandoned it for 3 weeks now (no worries, I have tons of good stuff in store for that blog!!!

I have rambled quite a bit and need to wrap it up, I have since gotten rid of most of those cards that I picked up last summer (maybe half). But deals seem to make their way to me. Like Sunday picking up the cards that I got, Whoa Nelly! Hey I know it was mainly the junk wax era I was getting, but let me tell you the super stars were in there. Jr, and the likes!

More tomorrow (cards that is)