My goals for collecting cardboard will be simple like last year with a twist. I say this because one really should push themselves every now and again. So my #1 goal for me is a biggie.


1) Double the size of my T206 Collection. (it can be done, being that I only have 3). So if anyone feels so kind to knock this one out all by their lonesome, feel free, I won't stop you, promise. LOL. 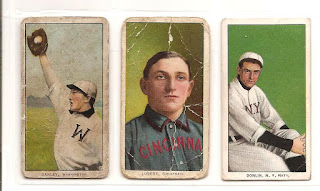 The back view is the reverse of the cards above. 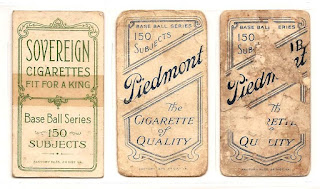 2) Try to wrap up as many as I can of the "working on" set builds needing less than 10-15% to complete. (Secretly, oops I hope it is around 12 total sets completed for the year, counting all flagship sets).


3) 2015 rollover: Update my Braves want pages for years 2006-2014. This one is obviously the most challenging for me. The time to go back re-run all of those Braves checklists, then check against my HAVES lists, then check the want list, and finally add those that are missing which is a ton, I know already. Hence the reason it didn't get done in 2015. (Damn, procrastination! The thing is eventually it has to get done.... right?)


4) Get the "Set Builds" lists for the 70s Topps run up on the want page and make a dent in them. And to get the FLAGSHIP Fleer and Donruss runs up so that I can put a huge dent in those cans. I would also like to get my FLAGSHIP Upper Deck and Bowman runs listed up to date, but not a deal breaker if I don't.


5) Finally, get the dozens, yes plural of boxes and some packages of cards that need sent to the post office. I really want this one knocked out asap. I ran into a cash flow problem in the 4th quarter last year and it has been driving me nuts just sitting around having to look at them everyday.


Those are the 5 main goals I will have for 2016, there are obviously some others that aren't mentioned here, but are more of an organizational issue rather than a collecting goal (cards to add or get rid of).


Have a GREAT New Year all and be SAFE!


Posted by Johnnys Trading Spot at 9:18 AM