SOME CARDS TO CHAT ABOUT

Earlier this week I got a surprise PWE from TJ (the junior junkie). He sent me a few Braves.

That's my first Hometown heroes card, love the Heyward card (if it wasn't going into one of my Braves binders it would be going into my "playn dirty" collection. That Mathews fit nicely next to the Francona from the same set. 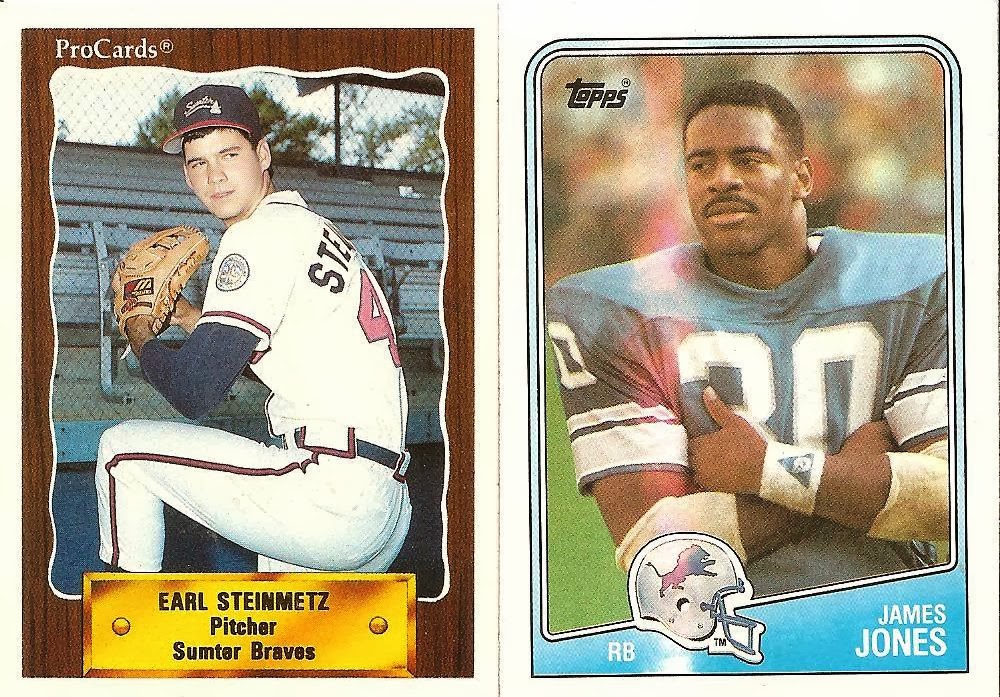 TJ also sent me the minor league card on the left.  The Jones football card came from Don another trader from OCT (oldcardtraders) who hits my "Gators in the NFL" binder.

Now the following cards are some that as I was going through the monster boxes where my tradeable cards are stored, caught my eye for one reason or another so I pulled them out to post them.

Previously Nick (dimebox) had mentioned that he might start a new mini  "hit by pitch", but he didn't think there would be many of them. I found two the other day. The Van Slyke above, just makes you want to say ouch. We all know what that feels like don't we? My elbow hurts now, LOL.  Now with the Konerko card, the base-runner may not be at the plate, but he was definitely hit and grabbing what.... the same elbow. OUCH again. Kind of distracts from the player featured, huh. At first glance I didn't see the Ferris Wheel in the background on the Bolton card. Not sure how often that appears on cardboard.

Here is where I think Billy was contemplating writing on his bat for the next photog. I'm not sure what Young is doing there, but it's unique. All I can say about the Devon White card is ..whoops!

I know we've seen those first two a few times and they speak for themselves, but that Hernandez is a little reminiscent of Klu (although his arms aren't near big enough).

Is that one heck of look on Mr. Belle's face? Makes you wonder what he was thinking. Benito there, I can figure out where he was standing or what he is looking at. If he's at the plate, the angle of face isn't looking at the ump, or the catcher, or his bullpen (pretty sure he was a righty). With Geren, he has time to take off his mask, stand up, look down the line, the batter is long gone, yet the bat is still standing up!

I put the two Wells cards side by side so you could reference a normal Wells with the facial hair vs. the clean shaven one, just ain't right. Pretty sure Sojo's eyes are closed there.

Konerko's eyes say it all......You called that a strike????? Now with Slaught, can't figure that one out either. He is looking at the ball which is bouncing straight up (batter is gone, dust all around) yet his glove is face down below the ball, what? Perez is definitely giving us look there, if I was the batter I'd be scared.

Someone was blogging about Bob Hamelin a week or two ago, and all I could picture was the card you see above (enlarge it if need be). I'm sorry  but this card just doesn't look like someone that should be playing baseball, maybe a lineman. But to give him his due he did have a good career, but I just think of this card when I hear or see his name, it must be embedded in my head.  Now Marrero is having fun, ain't he?  I'm not sure why I pulled that Batiste card. Now I remember, mouth open wide, glove closed ball coming down, what is he going to catch it with?

Another eyes closed shot, love the way the young Juan just flips the bat up, leans back and watches, cool. Finishing up with another Benito, at first I didn't notice in the lens were more shots of Benito, but in catcher's gear squatting. Things that make my brain go hmm.