The wackiest thing tonight is probably me, you'll understand towards the end of this post when I get into the bit about a contest where everyone wins! But for now let's look at some cardboard. 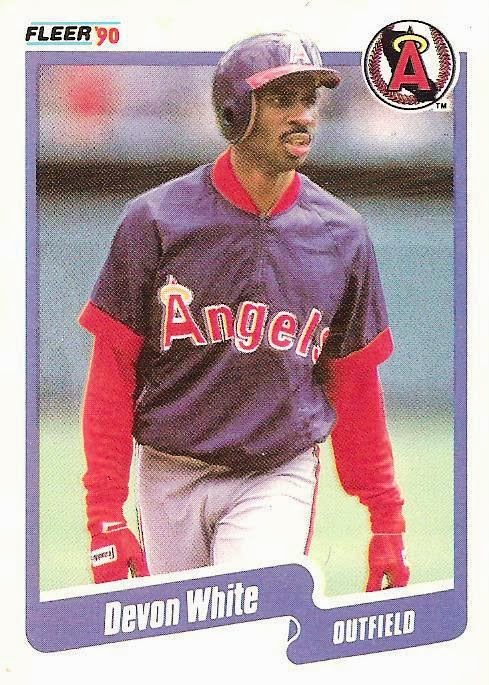 I bet you Angels fans are glad they don't use those uniforms anymore. 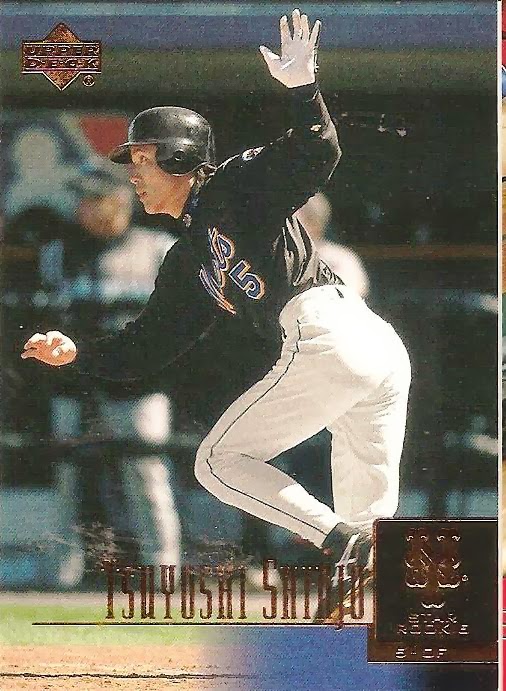 I'm not sure if Shinjo had that big of swing in this shot (looking at how high his left hand is), looks like its a liner down the right field line by the way his eyes are focused, but hey maybe he got one up just enough to clear the wall. 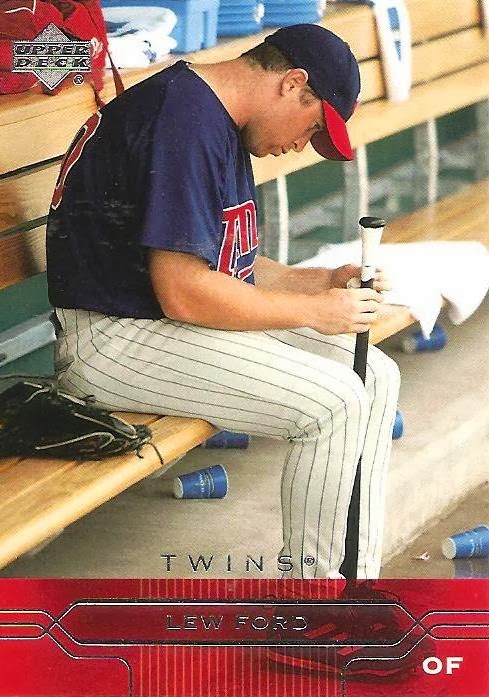 Sitting all alone playing spin the bat, in deep thought. Hmm, I wonder what he just did or didn't do. 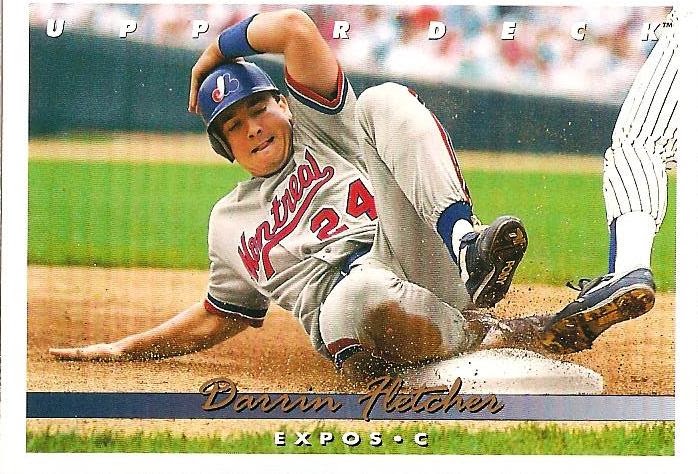 Why is he holding his helmet? 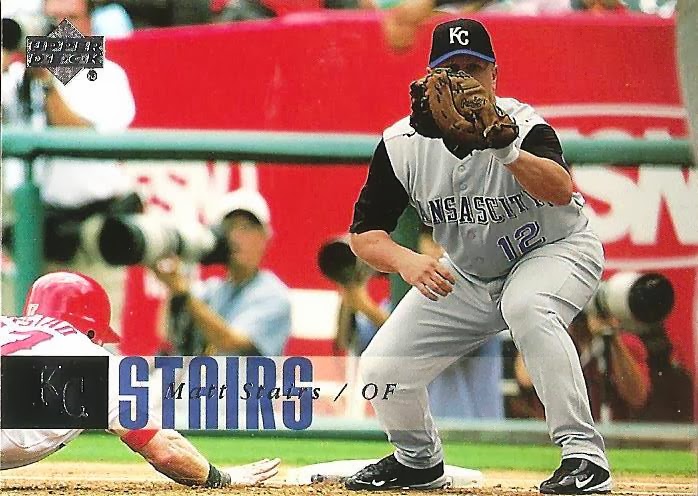 Let's see, maybe it's all of those big cameras in the background or because it's a pick-off shot. No, its because Stairs is playing first base here and right there on the card front they are listing him as OF. I think OF/IF would've been an appropriate edit at least for this card. Still a great action shot of the pick-off. 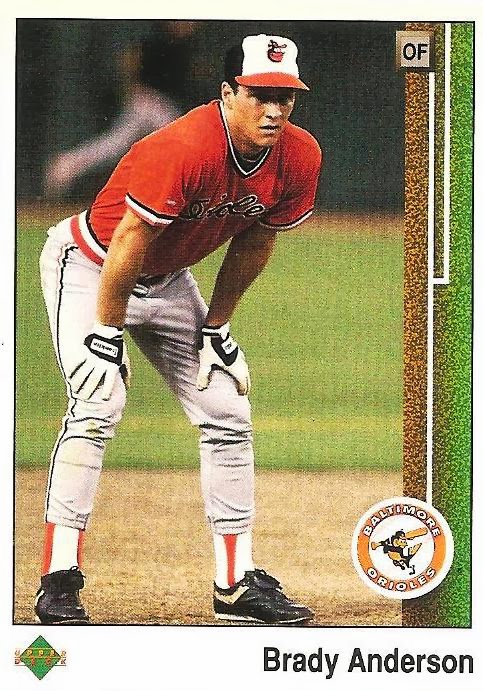 What's wrong with this picture? Base runner (you can also see an outfielder/someone running in the background) yet no helmet on Brady. Maybe during a practice??? I don't know. 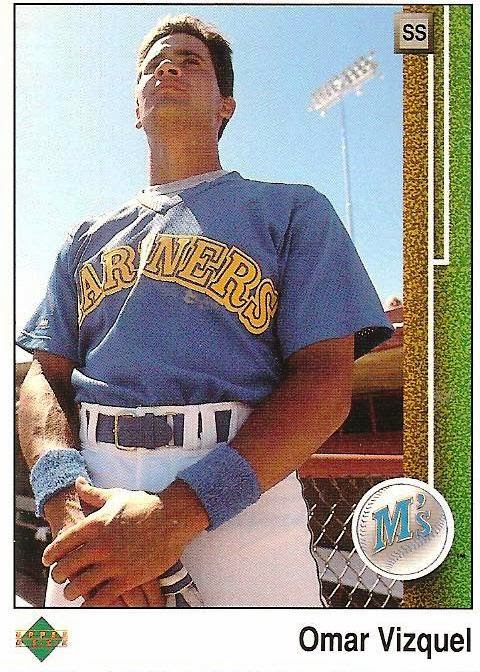 Not your everyday photo on cardboard,  and yet the card back is worth a look too. 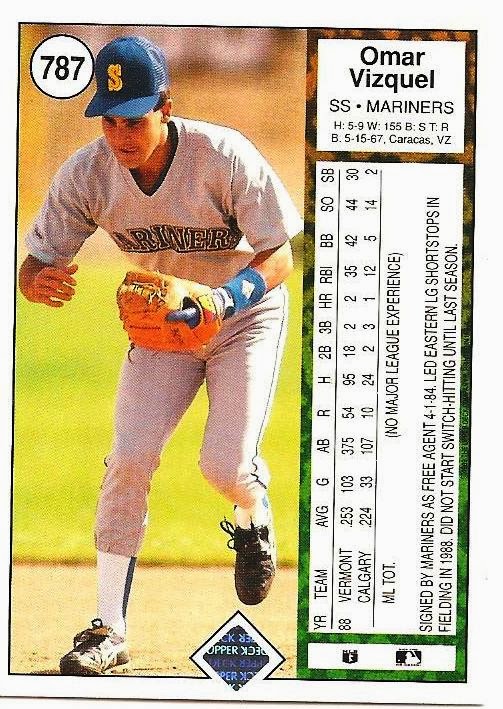 What does he have under his hat/cap? Sure is sticking up a bit. 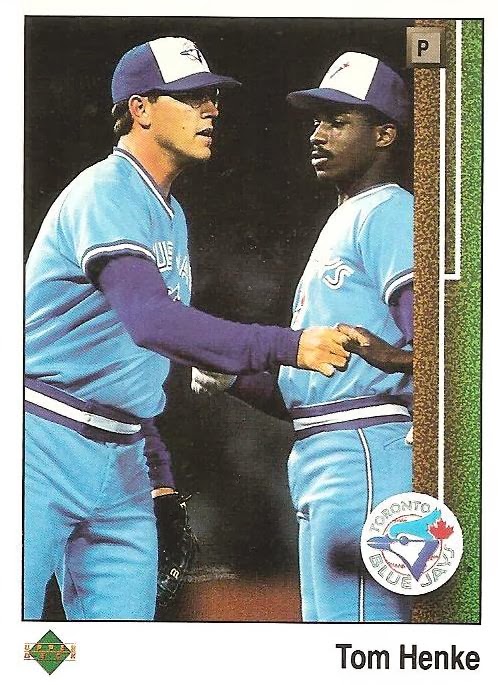 Nice shot of the crime dog there, but what's up with that handshake? Who is that? and did they interrupt Fred and Tom's conversation? Aren't they on the field? 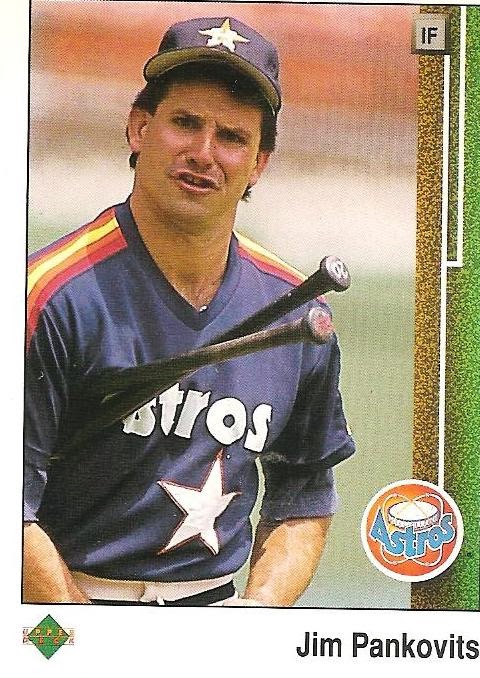 I may have posted that mug before, looks familiar. 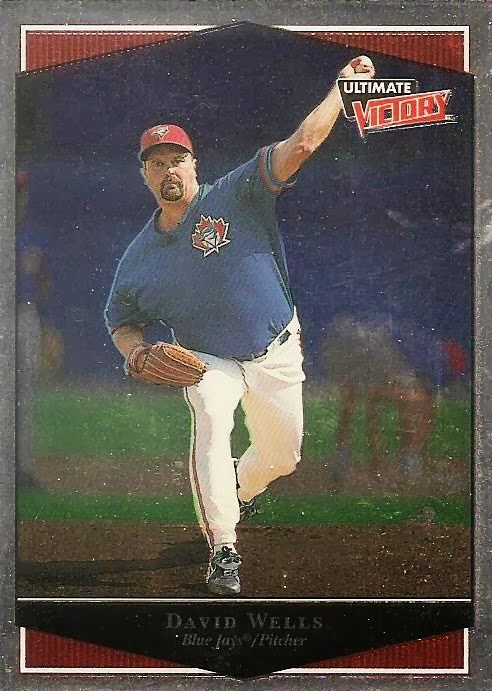 These cards are shiny and dark, I apologize as it maybe hard to see the background. I see the shortstop, and then somebody else wearing shorts bent over near second base while Wells is delivering a pitch????? 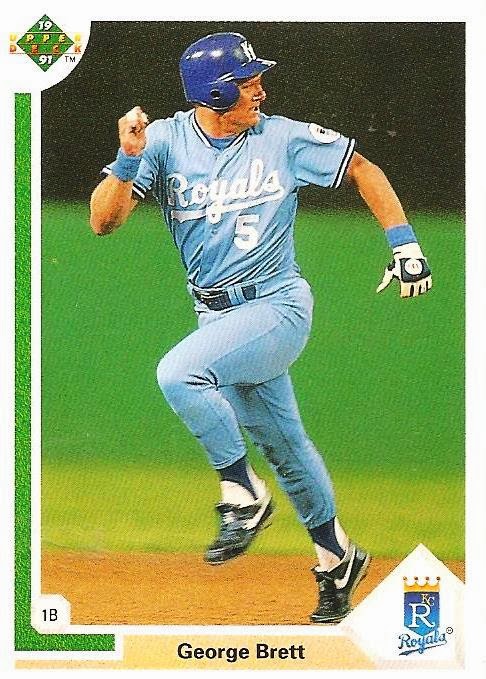 Veterans don't have to look to the third base coach, LOL. 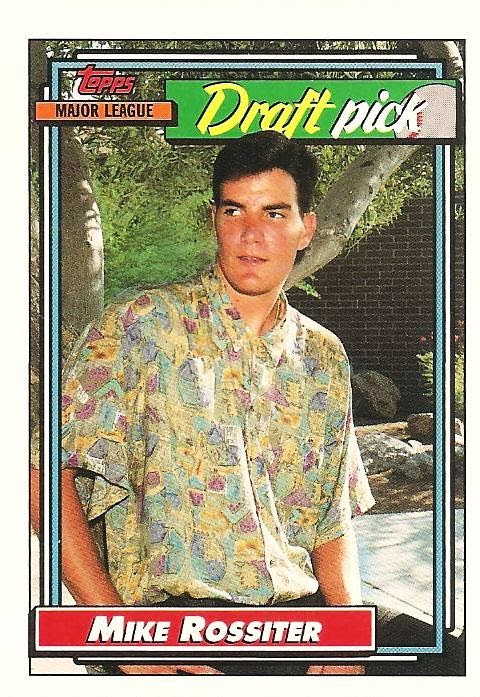 That shirt looks an awful lot like one posted in someone else's blog a day or two ago. 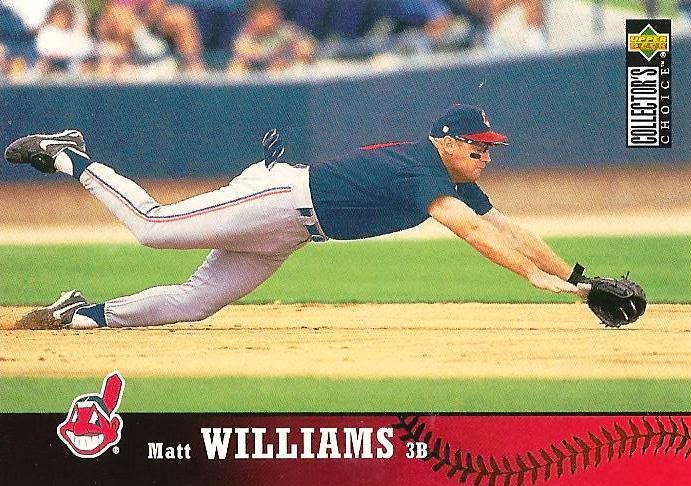 Okay Matt, I think your timing was a little bit off. Not even close to the ball, in fact you're closer to the ground. 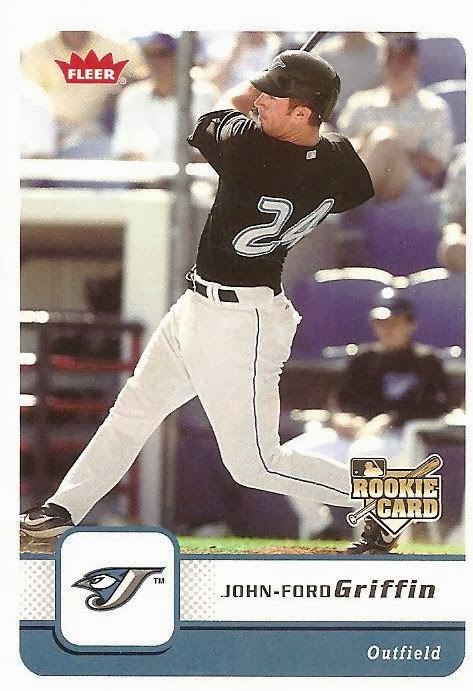 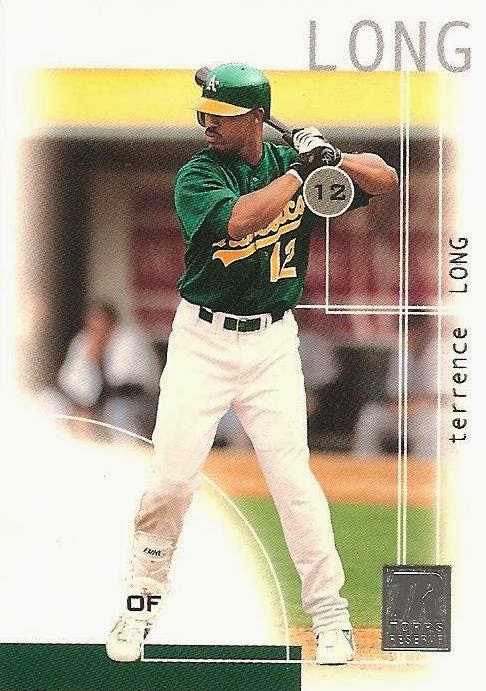 Okay Topps this was a high-end set, so what's the deal putting the position and jersey number where you did? HUH? 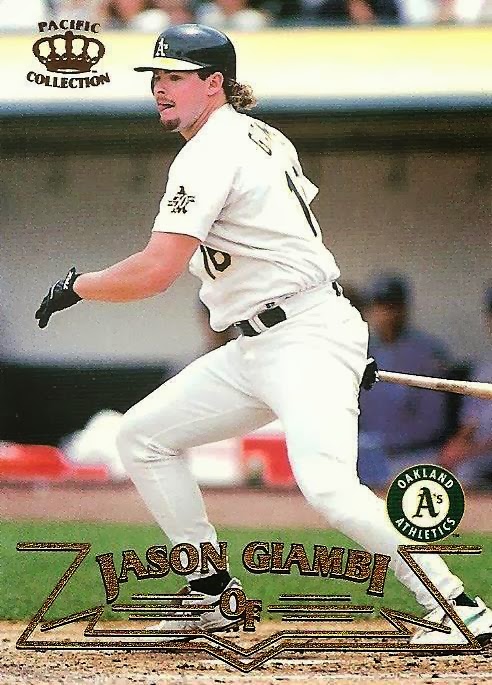 Looks familiar again. Does Jason have eye make-up on? Maybe a little blush too or some powder. 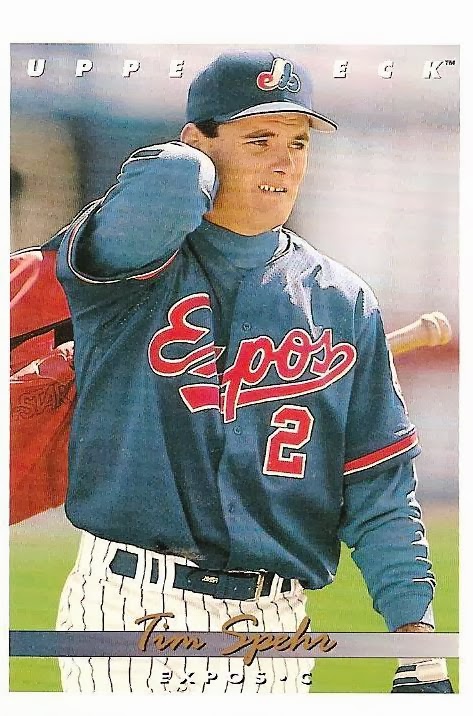 Yeah, that's the worried look of someone who had a .189 batting avg their rookie year. 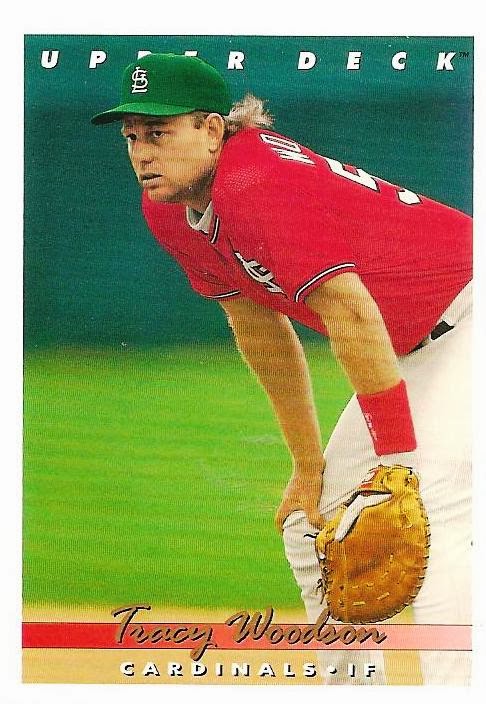 Maybe this photo was taken with Christmas on the brain. Really, a green hat with that red jersey. Might pull the look off with a green wrist band.

Time to get on to Upper Deck. Here we have 2008 UD First Edition Update.

Why would UD not put First Edition on the card front for the update series? I'm just saying.

Remember I'm the wacky one here and to change the subject a bit, here are some super vintage tobacco cards from 1926. I have a lot of these sets mainly from the 30s though. I've been trading thse on OCT (oldcardtraders.com) for about 6 months. I figured I'd better show the last of the trains before they are all gone. 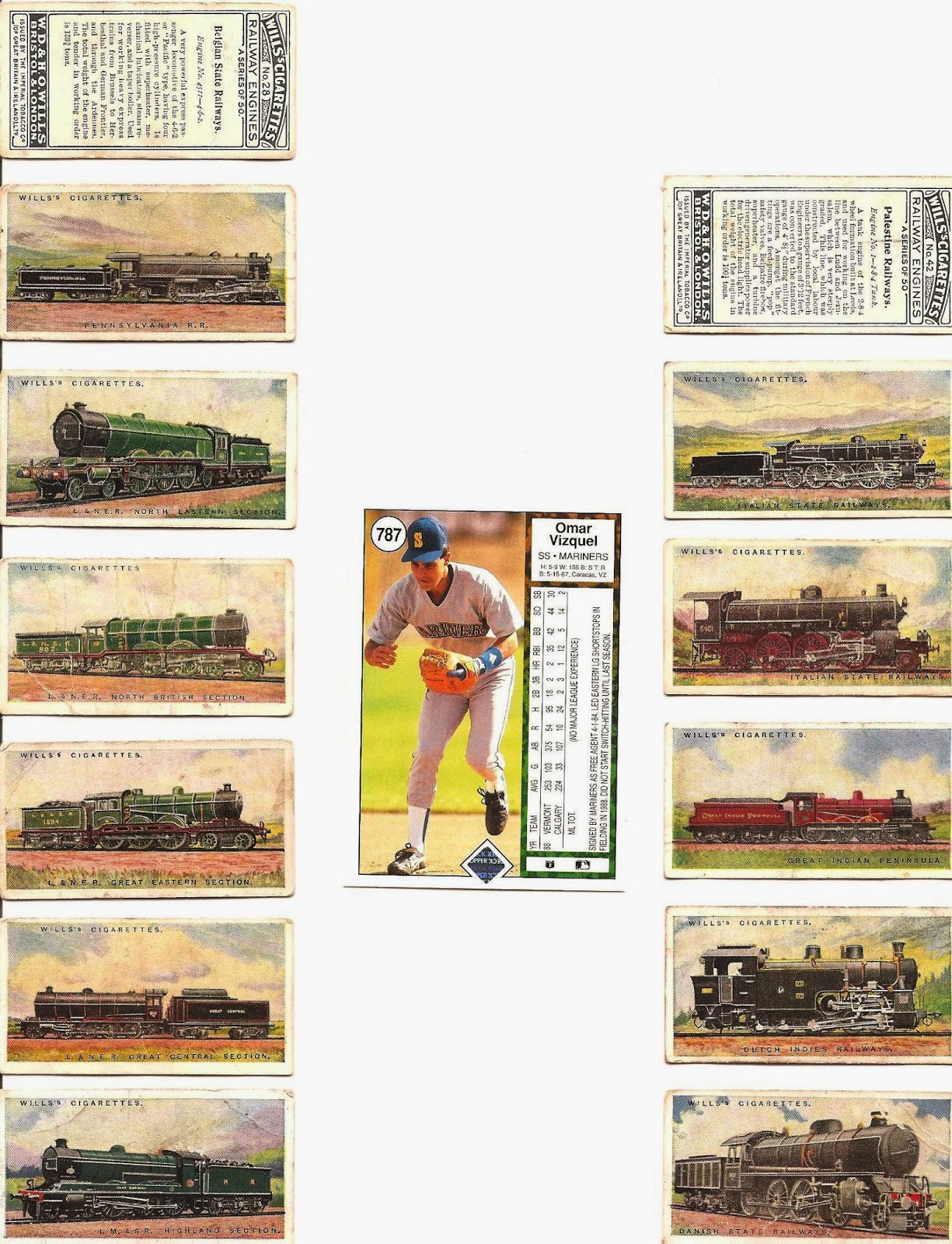 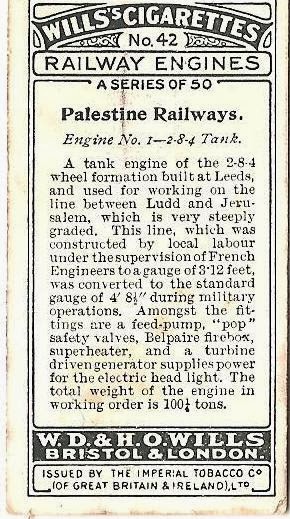 Again, I have a lot of different sets from the 30s, bridges, flags etc.... if anyone is interested in them.

Now, for the February contest shall we have some fun? I say yes.
Here we go: There is an entry fee: at least one (1) card from my Braves want list, (link on sidebar). The big list/link not the 10 most wanted (but feel free to send any of those if you want). Simple and easy.

There will be 21 winners/slots in this months contest: the first 21 comments claiming a specific slot on this post gets a slot. (I will list the slots to be claimed at the bottom of this post). One slot per trader.

The prizes will be that team/teams assigned to the slot (only one trader per slot) and 10 total cards from various products. For those that have traded with me, you know what kinds of cards I have. Should be a nice lot for everyone.

Now the fun part (or the wacky part for me), once all SLOTS are taken and all Braves cards are received, I will be randomizing each slot for the alphabetical choices for the last name of the players from the team/s for your slot. a, b, c etc.... (I will be grouping i, q, u, v together and x,y,z together) In case you draw those random "letters" and your team/s doesn't have 10 cards I will select some of what I feel you would enjoy. I know that this is going to be some work with 21 randomnizations, but I believe I will enjoy it, at least pulling the cards.

Here are the slots to be claimed:

No Braves (they are mine, lol) No Red Sox, they are being traded away to Mark. First come first gets.