It looks like Tim, and Mark were on the right track, but there is a bit more to it. Little bit anyways. Tim figured out the HIDDEN part was a clue. That is #1.  And the answer to that is... here are the 6 cards I didn't show. I HID them.  This forced you to guess a bit, and I GUESS that really wasn't fair.  Clue #2 was I mentioned a couple of times, that I had noticed there weren't many Yankees cards in the box. This should have eliminated guessing the 2 Mantles, thus reducing the remaining cards. Tims 7 are the correct ones I shown, which Mark also chimes in shortly thereafter confirming his 7 picks. He did guess 3 of the other 6 correctly, but he choose both Mantles, Killebrew was a good guess though, but nah didn't get him.  Clue #3.  I threw out hints along the way like yesterday "wonder which player I haven't shown yet" on post #10, only to NOT show any new players on the last post, mainly Braves. Should have had ya thinking when you seen the Braves. Besides these 6 would have made it way to EASY.

Okay, so I snuck (I don't think I've ever spelled that word before, looks funny) Reggie, Brett, and Frank through. Oh well, I am going to have to declare Tim B the winner.

I have since that show picked up 1 more from this set without even trying to. Huh! 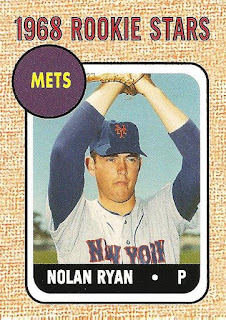 That one would have been a no brainer too, so I would have hidden that one too. I was fortunate enough to get doubles of the Rickey, Cal, Gwynn, and Ozzie cards too.

Thanks for playing along with my "out there" somewhat mind.   Can't wait until the 4th!  What better way to spend Independence Day than with a grown child who lives 5 hours away at card show, and just might get to meet fellow blogger/reader/trader Jeff J. Wow, lucky me.

Is it Saturday yet?