A truly Wacky Wednesday: What happens when BOREDOM takes CONTROL?

I've had this post stored up in my head since last week. The backdrop.... before the trip to the flea market on Friday, and before the last order received from JC, and before the D & A order came in I was going a bit stir crazy. At least when it comes to cards that is. With nothing new to play with, my mind began wondering what to do.  Boredom came into play and some how I wound up in my closet where I keep completed sets, unopened wax boxes, and set builds that I am working on.

I glanced over the factory sealed sets that had never been opened, looking for "the extras" that sometimes come in sets. Started on the far left, that is where I have Score. Okay, I see 3 sealed sets 90, 91, 92. The 1990 only has the 56 magic motion cards, nah I'll pass, 1991 had the motion cards plus 7 Cooperstown cards, hmm?, nah, I busted open a sealed set a year or two ago to get those Cooperstown cards, and lastly we have the 1992 which has/had 17 bonus cards. Three DiMaggio, 3 Yaz, 4 Cooperstown cards, and 7 cards from the 91 World Series...Braves and Twins. Although the Braves lost in 7, that was a great Series. Lots of 1 run games. Okay I found what I wanted to open. 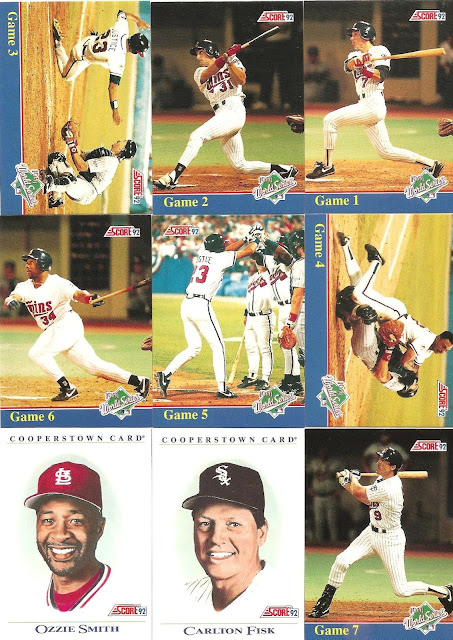 Great 3 Braves cards to mark off of a team set (complete...done). 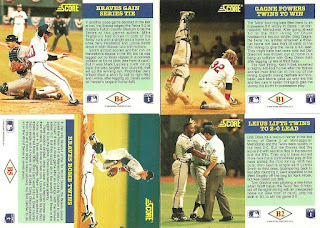 Here are 4 of the cards backs.  Braves in the background, yippee albeit two of those have a Brave on the front. So 6 of the 7 are keepers, one being the Puckett card for his PC.  Cooperstown definitely keepers.  Just look at that Olson doing a head stand (not on purpose of course), and the other play at plate, and then you have UMP arguing by Gant.  Notice he grabbed the Ump's arm? Laying hands on the umpire, how cool is that for a piece of cardboard backage.

For me personally not much to brag about here (Braves fan and all), but we do have another play at the plate favoring the Bravos. 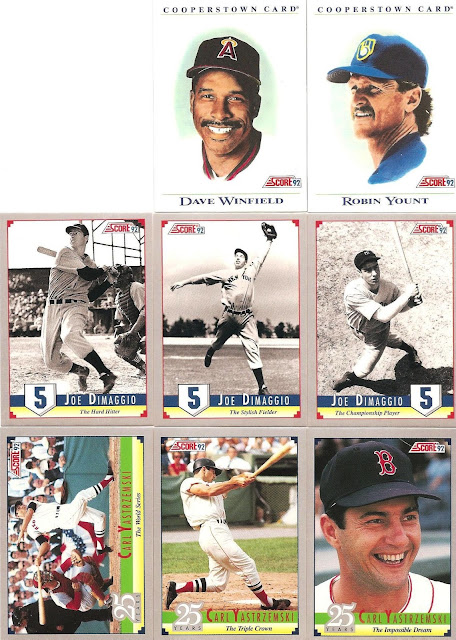 Ah, the other 2 Cooperstown cards, and keepers of course. Then the real meat DiMaggio and Yaz cards which is what I was after to begin with even though the Braves cards took me for a loop.


Right next to the "bonus cards" inside the box were the Dream Team cards. 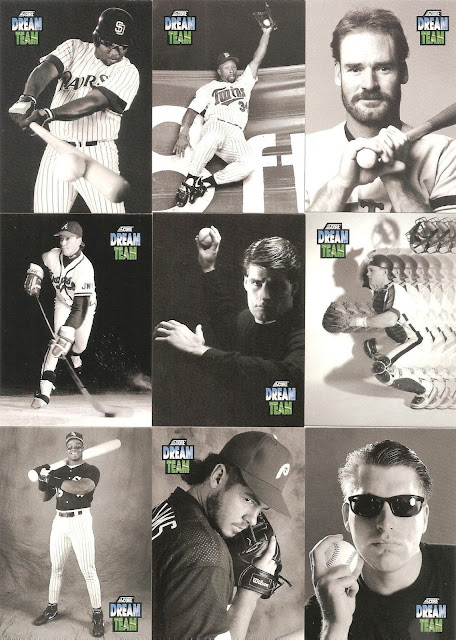 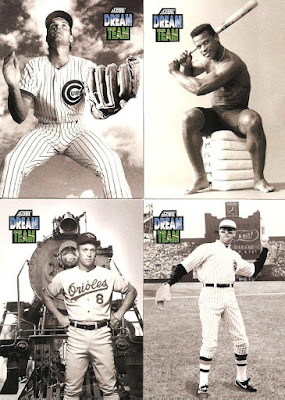 Really cool cards for the most part. I still have more to show from the 1992 Score, but let us take a very brief departure.

While scanning those sealed factory sets, I also noticed the 1991 Donruss which had the Leaf preview cards inside, and I wanted them too. 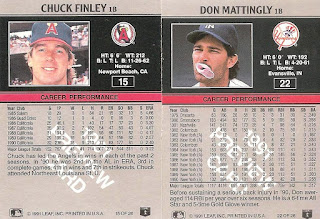 My goodness, Bubble Gum on a Mattingly, I definitely want  another copy of this card. I got to have another one. HMMM, I think that Finley will have to find a new home......LOL...

2 more for the PCs. Now back to our main feature.


My boredom came into play again after setting those awesome pieces of cardboard free from their prisons. Of course after giving them a little yard time, they were given brand new HOMES
where they will not be kept captive, but will be available to entertaining visitors as they please. (all but two that is... 1 from Score, and the Finley, will find new homes if not already).

I figured while I had the box open and I needed to put back those Dream Team cards, why not put the cards in numerical order. What could hurt, I might stumble across a card I like. Sounds like a win/win to me. Speaking of which... am I the only one that "DISLIKES" {playing off of Night Owls recent post.  And NO, that's not stealing, LOL} the randomized placement of cards in factory sets? It really pisses me off, big time. I know that by putting them in order we get the chance to LOOK at the cards, but do we really? I mean come on, piles placed by the 100s, then by the 10s, then in the final numerical order. That is a lot of work. At least that is what I do when I open one (most of the time). But for those of you who don't know me, I like checking out the cards, front and back. Got to find those Gremlins that are hiding from the mini collections. I am so thankful I "dumped" a slew of those MCs. In fact Jedi,  "What's in your mailbox?" LOL.  Oops, sidetracked (ADD).

Here are some Wacky cards to get back on the Theme of the day. 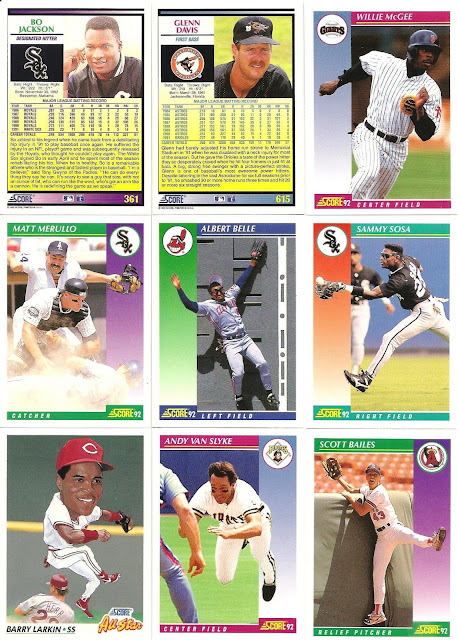 1992 Score had it's fair share of Turning two, bunting, and plays at the plate. Check out Bo listening to something with an ear bud. Remember sealed set, so what is that on Davis' cap? bird shit? Lots of Giants throwbacks, play at the wall, that Van Slyke is hilarious, and of course the "posed" pitcher shot.. Now why did the Sosa card make it into a Wacky Wednesday post?  Do you remember when his legs were that skinny, LMFAO. 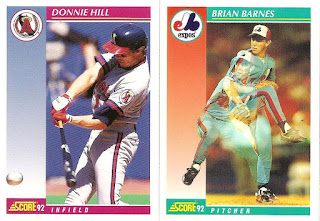 That ball looks a little too big, and a nice multi exposure.

Here is what is really Wacky.  Where was all the "BLING", 90s???  I focused on the backs but the cards fronts were not any better. 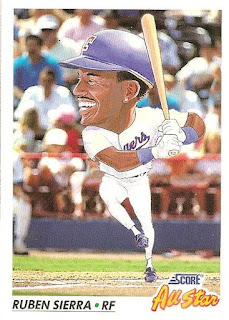 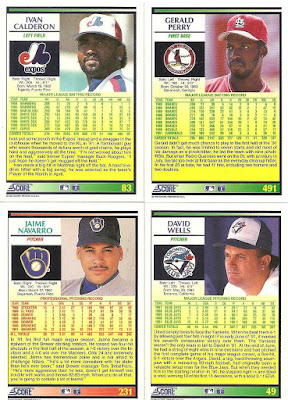 FOUR (4), count them just 4 card backs with earrings. I had to put the cartoon front on here, they included the earring. As for the necklaces, just 36 total on the backs, and not the bling bling either , small flat chains barely noticeable maybe 4-5 inches at the jersey/neckline.

The Larkin and Sanders were 2 of the blingiest looking jewelry cards. No crosses, gaudy numbers, or other sacraments to oneself.


Well, that is a lot coming out of 1992 Score, but that is what happens when boredom takes control.