By far, my biggest expense from the Jacksonville card show came from the first table I was sitting at. The table belonged to my favorite dealer from any show, Fred. However, these cards were not his. He brought them up for a friend. There were 6-8 dollar boxes (3000 ct boxes). I spent 3 hours combing every single card. So yeah 20-25K cards in a few hours pretty damn quick if you ask me. With my back the way it is I did break half way through. I sped through the football and basketball ( I did pull all of the PINK basketball cards though).

I will have to break up the cards in a few posts (okay maybe 5-6 posts) so as to not overwhelm with the volume. I knew Fred would talk the guy down for me on the price. They weren't in top loaders but those pain in the ass thin harder plastic things, oh I hate those. Even with my "discount" I didn't get a "DEAL" on a lot of the cards that I pulled, but some I got a SUPER DEAL on. You'll have to decide for yourselves whether or not it is a Deal or NO Deal. In the end I paid about twenty cents a piece for the cards.

So let's start this thing off. 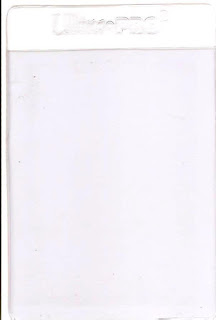 The pain in the ass protectors that EVERY card had to be removed from. 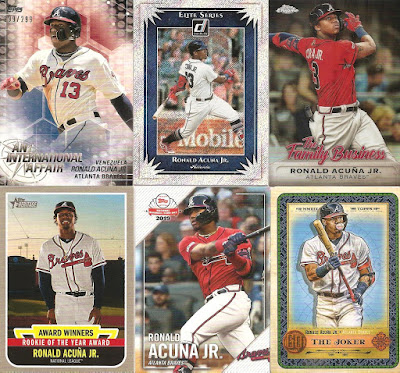 Ronald Acuna Jr.. Yeah, DEAL on this group no doubt. 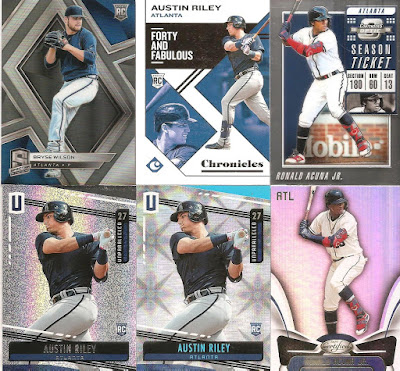 I would have to say DEAL here too.

Parallels. The Holiday Freeman is the Metallic Snowflake. Inciarte is the Rainbow foil.  Gold in the middle, and Refractors on the bottom. I'd say DEAL again. They are Braves and I needed every single one of the cards posted as well (above & below). 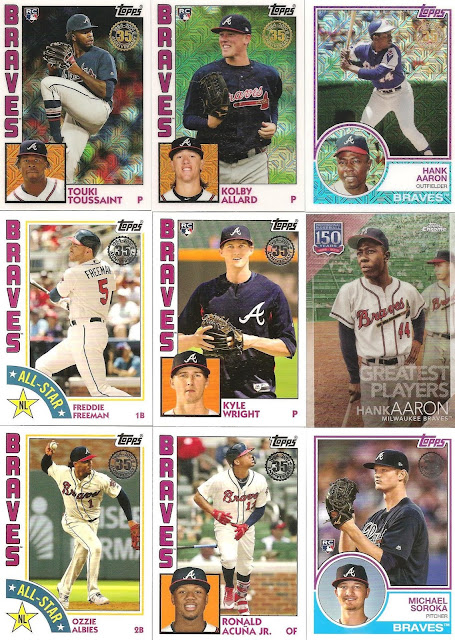 Silver pack cards and Anniversary, and never go wrong with Hank Aaron inserts. Now a few cards that I pulled for others, just a few though. 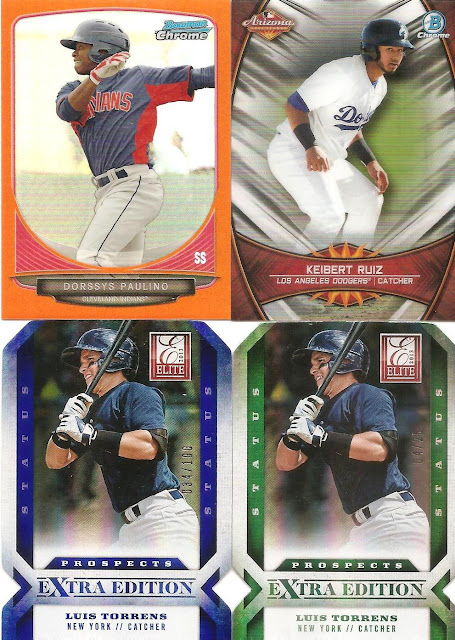 Gavin gets Paulino, but I have to decide about the two Torrens parallels. The TCDB battle between Gavin, AJ, and Kenny. 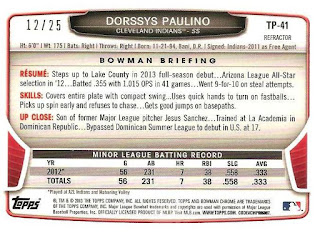 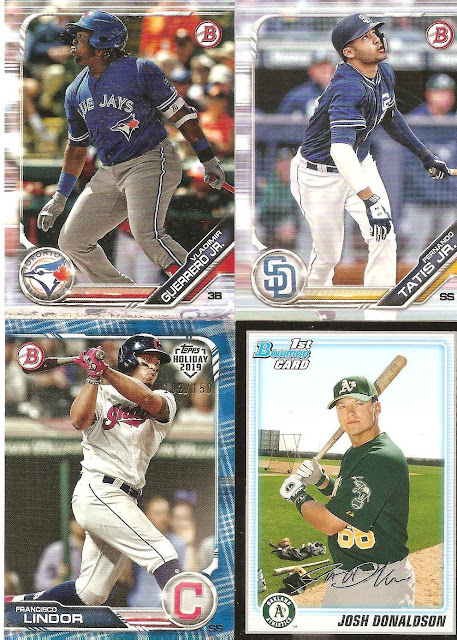 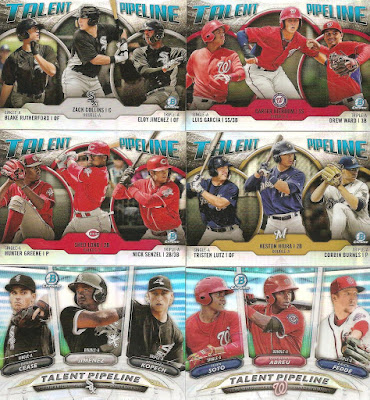 Popular up & comers currently sitting in my FUTURE pc boxes except for players like SOTO, he's already in the PC. 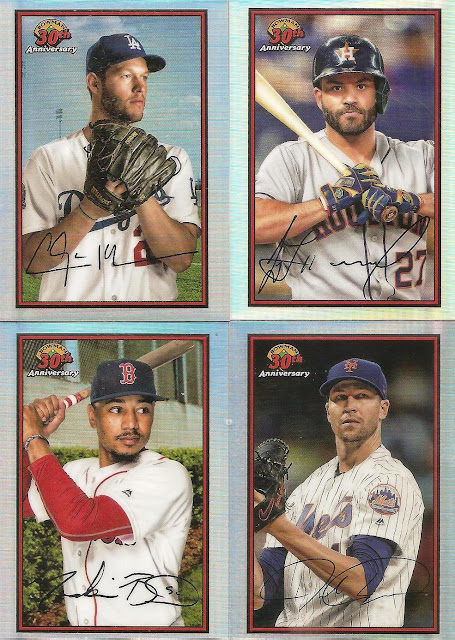 I've been showing just some of the cards from each brand/set. 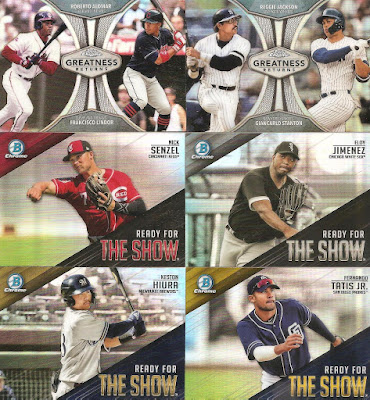 Yeah, I think five for a buck is a DEAL, at least for these young studs. 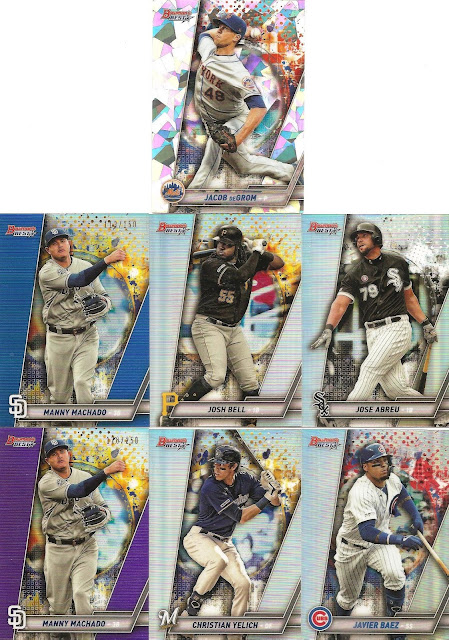 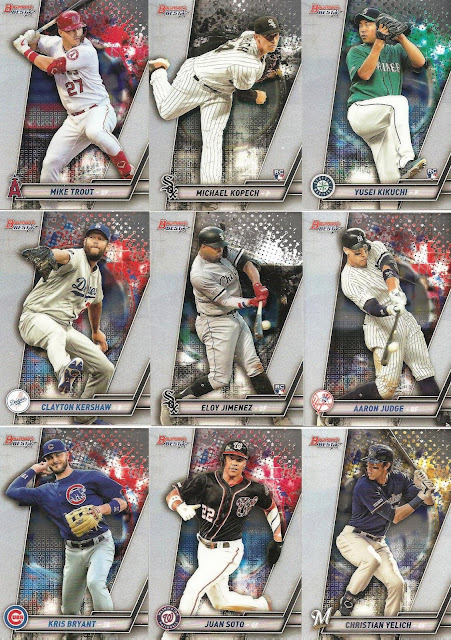 Base cards, but every bit worth a couple of dimes. Yes, dupes of Yelich. It happens when you on a roll combing through thousands of cards in a short time. I think this is a good stopping point for today.

Posted by Johnnys Trading Spot at 11:44 AM