Last Saturday I spent the entire day at this card show, when I had only planned on an hour or so to look at one particular guys cards, look mind you. He didn't show and I got suckered into digging through a box. That 1 box led me to another dealer with 10 3000 ct. boxes, and you know I love a challenge. 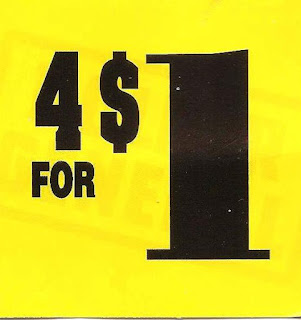 His boxes were dollar boxes too, but were on sale 4 for $1.00.  Half way through the boxes I had hundreds of cards pulled, and David whom I bought cards from before told me they'd be a dime a piece. I am thinking to myself, oh yeah let's see if I can get him to lower that again. 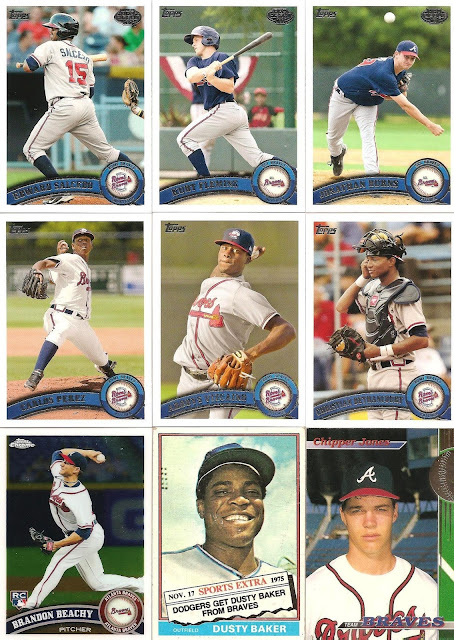 Basically, I was grabbing everything that was Braves or PC guys without any consideration as to whether or not I needed it. Elbows flying. I wound up with 922 pulls, and I had mentioned to David that I'd have to go through them to weed out dupes and the like before I was done. 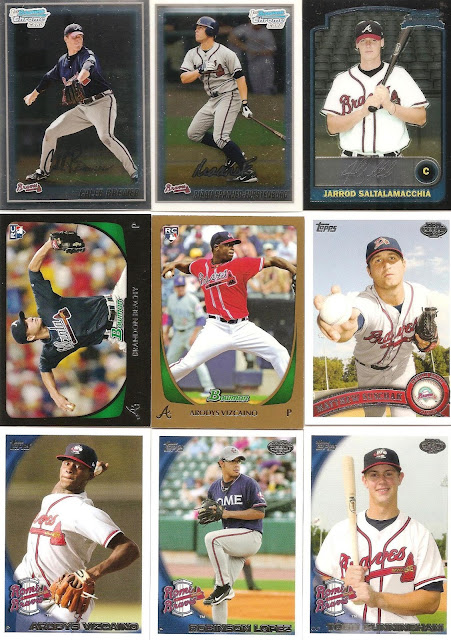 What I am showing you today are the Braves that I actually needed. I didn't even have most of them on my want lists. 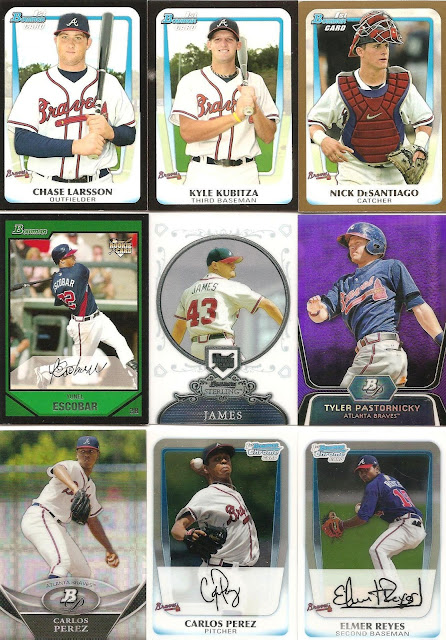 Just realized I need to add the Carlos Perez(s) to my Names binder. This one doesn't seem to be as animated as the other one. At least not on cardboard. 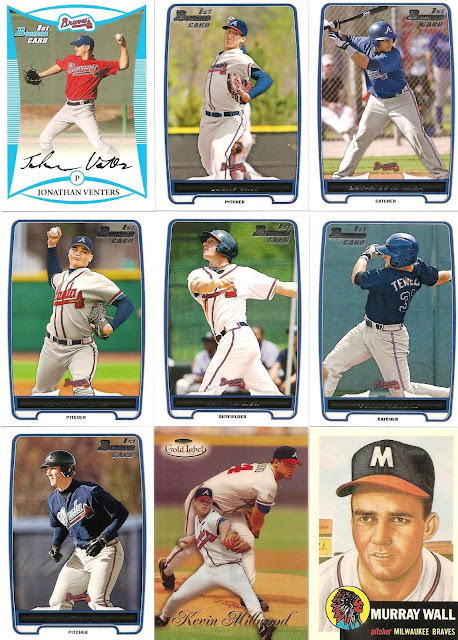 I had no idea I needed so many of these Bowman's.  Ah, relief in the form of Archives. 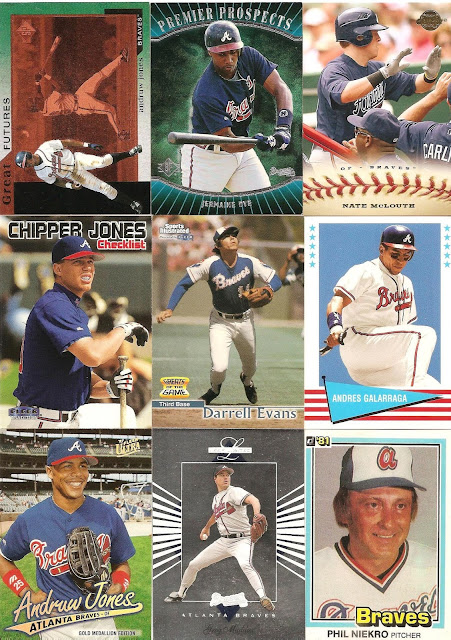 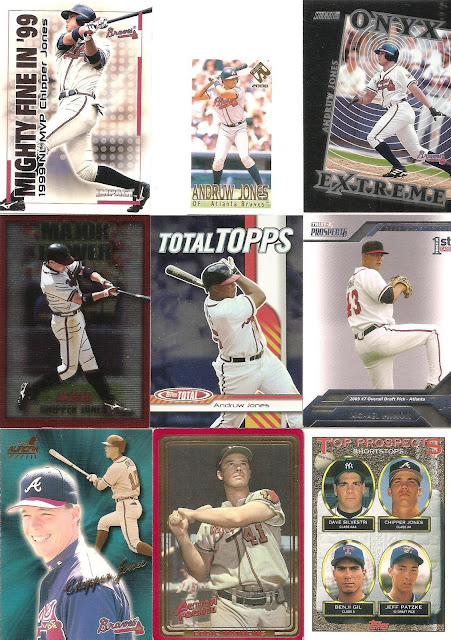 Turns out I grabbed a whole bunch of Andruw that I needed. You see I never got to go back through the cards when I was done to weed out dupes. See that last Chipper (1993 Topps), I wound up with 20 of them. Spoiler alert: I didn't pay a dime for each of those. 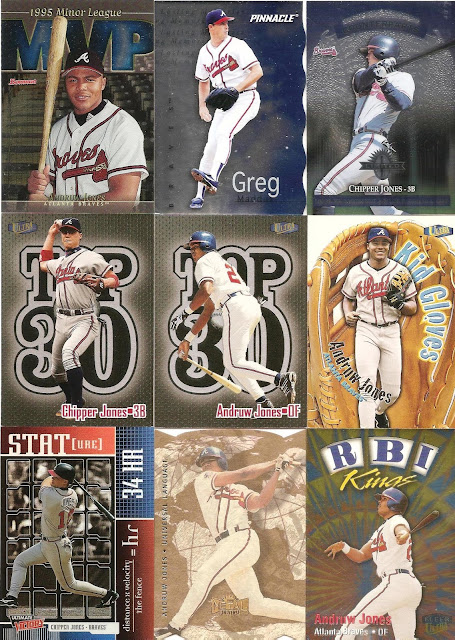 Some nice inserts of my Braves! 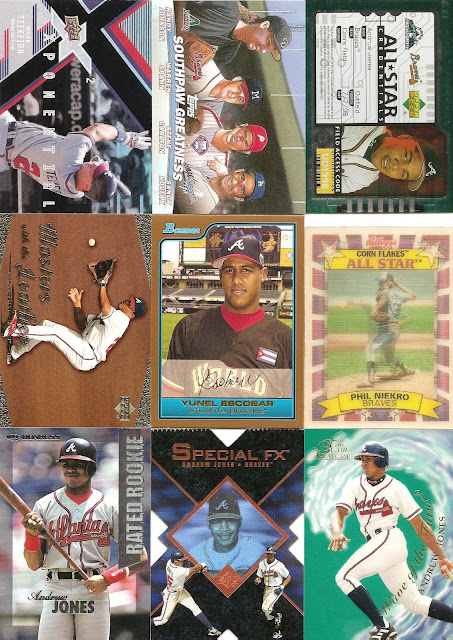 That's enough Braves (never enough). I probably grabbed 200 Braves in that 922 card stack, a little more than half were doubles (like I needed those). Some of them were put to good use in the PC binders, like Maddux, Chipper, Smoltz, Glavine, Mathews, Spahn, and Aaron.  I did mention "spoiler alert" a minute ago didn't I? Well, Long story shortened, I got through 8 of 10 boxes, had him tally them up (922), traded him a Mickey Mantle poster, David threw in an 1985 Topps  Clemens RC, and 2 autos. He said give $50.00 with the Poster, then offered up the last 2 boxes for the other 2 posters Joe DiMaggio and Lou Gehrig.  I jumped and wound up with apx 6000 cards for a cash price of $50.00. Oh, but what did I have invested in the posters? I owed $7.00 shipping (I've since paid that) for the posters, and about $100.00 in cards that I had ZERO invested in. I get to mail those out in increments over the course of the year (OCT trader points).

So the rest of the cards you will see from this Card Show series cost a penny each too. The last 2 boxes had barely any baseball, mostly football (going to my buddy Bob), and the rest.was Hockey.

Leaving you with the autos to start your weekend off. 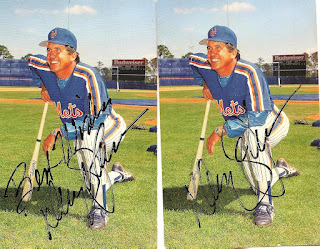 Team issued postcards, signed by a PC guy! I kept the one on the left and mailed the other one to the guy I got the posters from. Funny story there, but that is another post.