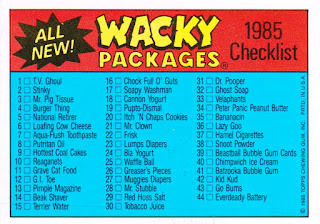 Here you have the checklist. 44 titles in the set. There are 2 different puzzles. No variations. 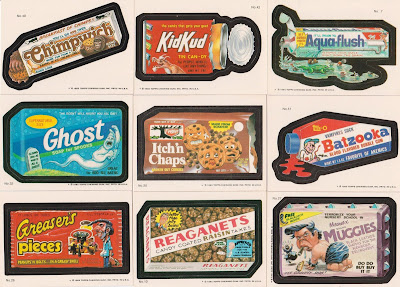 On a side note Topps also did an Irish test set in 81' (actually released in the UK and not in Ireland), but they say Ireland on the copyright, so they are referred to as the Irish set. A final Irish set (UK) was produced in 1985 as well, but the stickers are slightly smaller than the test set which were die cut stickers, but the full release in 85' were not die cut. The 81' Irish stickers were re-runs (17-33) from the original 1-16 series, but the first 16 stickers of the Irish set were all new stickers. Why am I telling you this? Well, technically those 16 stickers could be Topps' first attempt at new stickers.  In addition Topps also did a 1985 OPC set that just like the re-runs of 79 & 80 are identical to the US releases. OPC did have a set in 1987 that could be differentiated from the US set. Wow, that is a lot of rambling, but I do not own any of the above mentioned stickers so this is all you'll get from me until I do.

Posted by Johnnys Trading Spot at 9:20 AM