My my my..... where to begin. This past Saturday I made the 2 hour trip to Jacksonville for the monthly card show. I hadn't been in several months. I had been hearing (reading) that the cards at shows across this country were sky high. I was skeptical for the 2021 Topps, after all, they are readily available, even came out early here. The show promotional e-mail stated that there would be an additional room this month with a dozen more tables than usual. That was true. My old normal would be to leave here early enough to get there before the show actually started. Last year on the couple of trips (2 or 3) I made I did not do that. I left here at 8:30 am getting there at 10:30, which I did the same this time. I was looking forward to seeing my friends and many of the sellers are buddies too.

Right off the bat, the placed was jam packed like I have never seen before in Jax. I bee lined it right to my buddy and favorite vendor Fred who always sets up in the back. This is also my normal. I spent about 1 1/2 hours at his tables. Fred always takes care of me, and he did this time too. I will posting my pick ups from this show over the entire month, it will take that long the way I plan on doing it. In the end I only brought home two shoeboxes (1500 ct) of cards and that is uncommon for me. I spent my usual and that seemed odd for the quantity that I got. Nothing to do with the opening statement about the pricing regarding what I bought for the most part. As for the place being packed, I was told it has been like this for the last 6 months. Another huge thing I noticed was that other than a dozen vendors I consider regular, the rest were sellers I had never seen before. Two of my seller buddies were not there, Eddie who was working with the Golf Channel this past week and Chuck. Chuck and his wife (70's) have stopped doing the shows due to Covid. I get that. I was surprised that I did NOT see a single friend/acquaintance (consumers) that I would normally see at the shows regardless of where they are held. Not a single one. This too was odd.

About half of the "new" sellers were younger guys (under 50), and several were "flippers". This was easy to tell, as they would have TONS of the retail blasters, the display boxes, some even still shrink wrapped. Needless to say, I spent no money with those guys. Yes, they were priced high. Why, they (2021 Topps) are readily available at Walmart, Target, and according to NO even Barnes & Noble, lol. They weren't the only ones, pretty much anyone selling boxes whether retail or hobby boxes of 2020 and 2021 were sky high like I had been reading. Funny thing here is that one of the Hobby dealers had .14 singles of 2021 Topps and 98% of the set was in there including stars just not the Key rookies. I should have bought them all, instead I grabbed a little more than 100 for the PC's. I literally could have had the series 1 set minus 10 or so cards. All in all I bought from 5 dealers. This guy, my buddy Fred, my buddy Daryl, and two others.

I will be breaking down the month long of posts into 3 maybe 4 "groups". Obviously I don't need to show the singles I bought from the fore-mentioned guy. I also bought about 100 of the UK cards from him for the PC's as they were in with the 2021 singles.

One group will be Wacky Packages, yes the vintage Wackys and also some from the 85' re-run. These will pop on on 1 or two posts over the rest of the month on Wednesdays of course.

Another group will be a stack of Ronald Acuna cards new to me I bought from another guy.

The main two groups will be fun, or should be because it will be interactive sort of. One of those is what I bought from Fred and the other will be what I bought from Daryl. There will be a bunch of posts from both. I might as well start that tonight.

Up first will be the lot from Fred. I will call this the "60.7 cents" group. Fred always takes care of me like I said already. I will let you guys decide. Interactively sort of. In the end I paid what amounts to 60.7 cents per card when breaking down the total number of cards and other items divided by what I paid. So you get a picture of what it looks like when I am siting at his tables. I go through everything he has pulling what I WANT. Then when I am done (he continuously places them into boxes) as I stack em up, I ask how much , he tells me I give it to him. Good to go. All of his cards and items are in top loaders and penny sleeves so I have to remove them when I get back each time.

As this has been very wordy, I will start tonight with the non card items, which BTW are earmarked for a couple of bloggers if the want them. 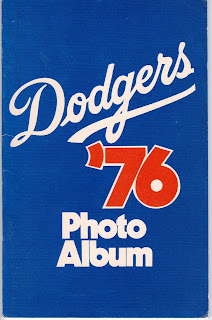 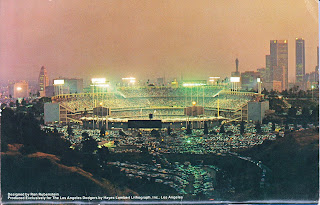 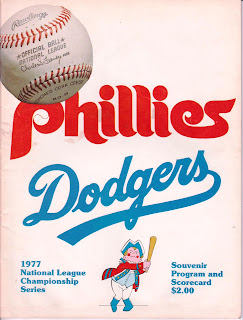 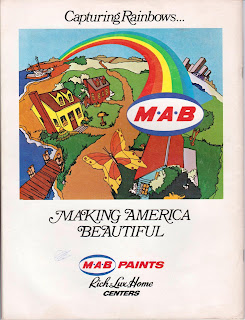 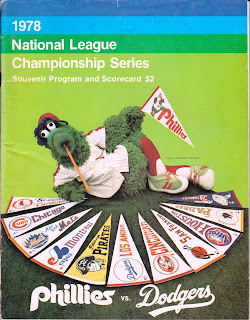 Front cover only.  Okay NO. Greg if you want these (the above)...they are yours.
Dimebox Nick. The programs below are yours if you like (except for 1). 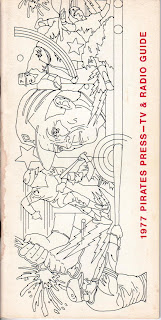 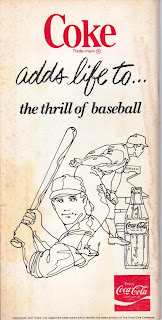 Front & back.
The program below is a keeper for me as it was a Braves game. 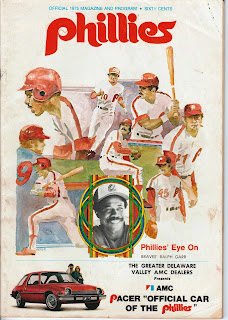 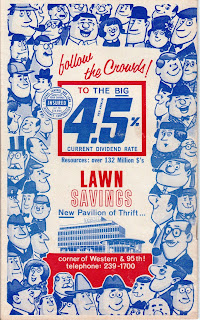 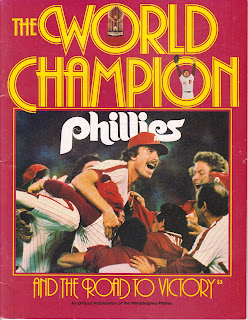 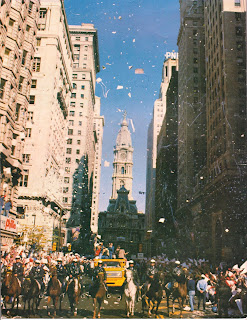 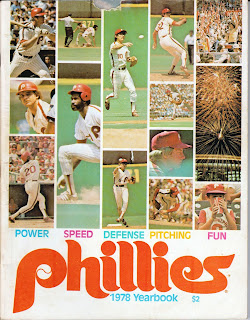 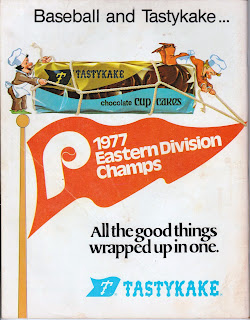 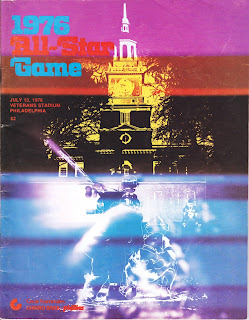 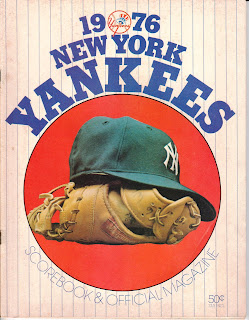 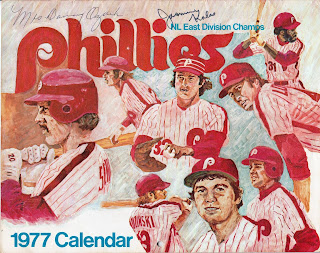 Even two autographs from the players wives. 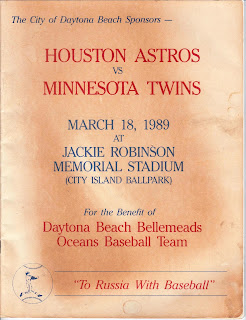 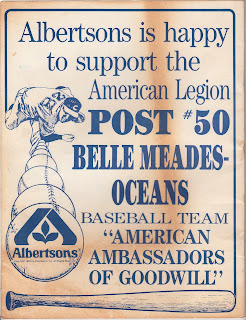 Front & back. Plus the following were loose inside. 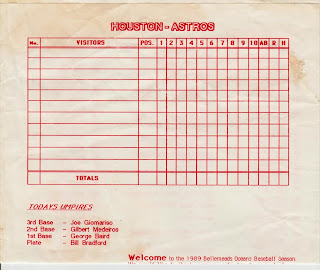 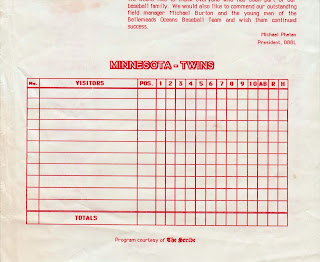 Blank scorecard. Front. Below is the backside. Notice the high school players. 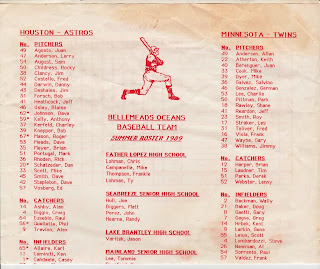 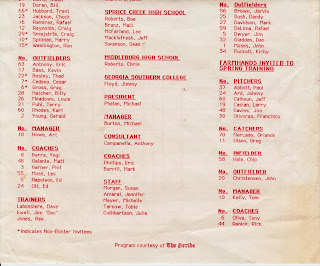 Jason Varitek stands out to me. 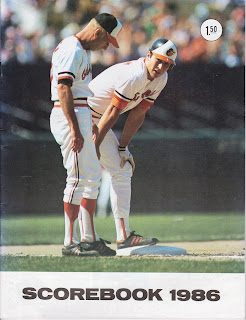 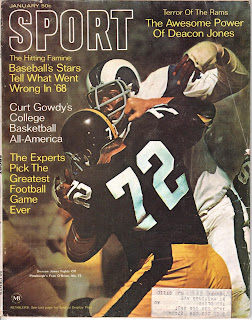 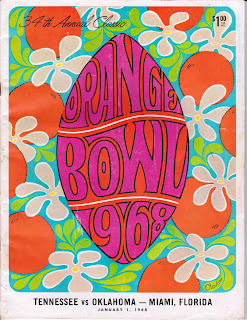 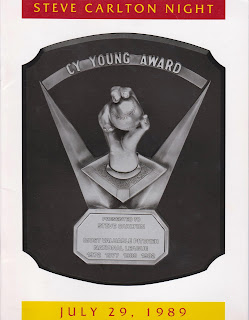 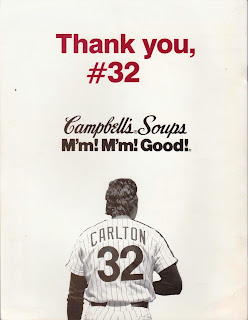 Front & back. The front is embossed, really nice.

Okay folks. The interactive portion. Basically I paid .61 cents a piece. Which ones were worth it, and which were not. Greg and Nick lmk. I'll start with the cards posts tomorrow night.