Okay, let's start this out right. I have been going CRAZY on SportLots for the last year and a half. Especially this year, adding thousands of Braves needs. I just ordered my third "box" deal. I gave up trying to work it to the max. Why you say? Simple, I just got in my second box, and doing all the work that I have to do to get them off all of the different lists, and scanned, and the wotnot. I am seeing double. It seems as if every card looks the same, like I just scanned that or something similar to that effect. I've been feeling this way for about a month. The box I just ordered will only have 102 cards. I will be taking a break (just myself) from ordering Braves needs other than the new releases that come out. That doesn't mean I won't grab a few here and there, but I need a break from them. I knew this heading over to the Jax. card show this past Saturday. BTW, it was a great meeting up with fellow blogger Jeremy from Topps Cards that Never Were fame. I'll have more on that in another post. Back to the "burnt out" feeling. I knew that I was not going to be digging through boxes for modern day Braves cards. My plan was to get some vintage. I will be working on my vintage set builds/Braves needs and maybe some modern set builds for the next few months. I believe this will be a good alternative for me right now. But, I totally blew at the show.

No, I did not go digging for non vintage Braves. I stuck to my guns. I looked at some high end Braves autographs/relic cards. In fact I bought a half dozen or so. As always I did look for a SUPER deal. I thought I found and made one. I was wrong, and simply put....I was out of practice when dealing with vintage. I spent 90% of my total expenditures at the this show making that bad deal. In a good way. It wasn't a bad deal except for the fact that I didn't need what I bought. I bought a near identical box of the exact same set (1969 Topps) from the the exact same dealer a couple of years ago. One of my dealer buds at that. I just didn't remember. 1969 Topps is great condition, like EX-Mt and NM on most. Seriously, the average condition was NO LESS than EX. Box had close to a thousand vintage cards with most from the 69' set. Some 58-72's maybe a hundred were mixed in. The box included high numbers as well as some minor stars. It was his dollar box. Unfortunately, I only found maybe ten cards that I needed for my set build. I even had my "book" in my vehicle at the show. I should have went and got it before making the deal. I bought that box of vintage plus a shoebox (1500 ct) of non sport stuff (it was full) and will be a fun theme for future posting. I also grabbed those high end auto/relic Braves cards I mentioned earlier in this deal. ALL for one money so to speak. Tonight I will show you those high enders, and now is as good of time as ever to show them. 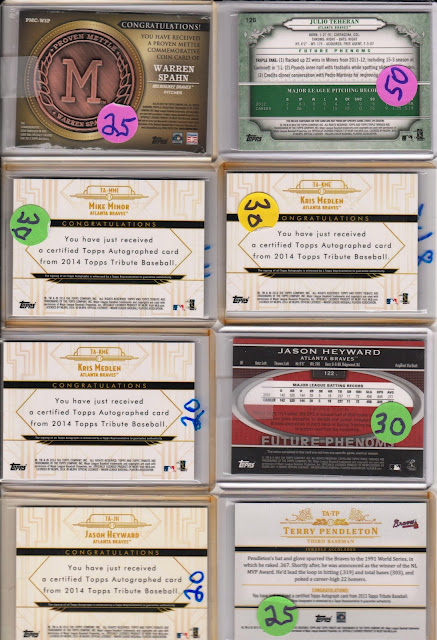 If you add up the asking prices on just these cards it equals $230.00. I am too cheap to ever pay full price. Y'all know that. I figure if these were all that I bought my buddy would have told me $100.00. 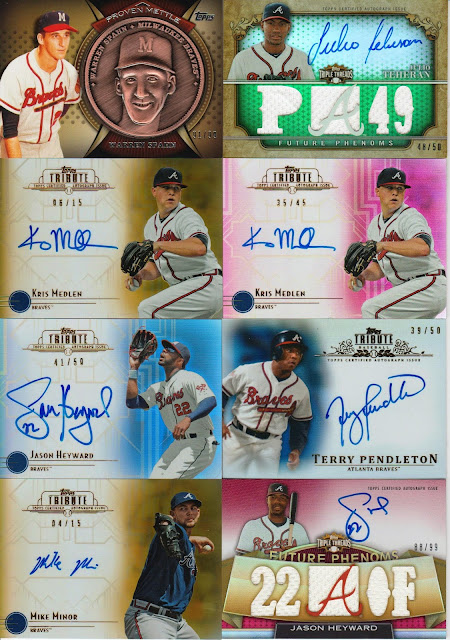 High end cards that I typically avoid unless they are in a $3 or $5.00 box. Even then I would still try to make a better deal and pretty much always do.

I figure that $100.00 of the DEAL was for these cards, and another $100.00 for the "non sport" box. That means I paid $300.00 for the vintage. I dropped $500.00 in total with this guy and it was at the end of the show, sort of. Basically I spent 3 Benji's on cards that I didn't need. I most certainly am going to have to get busy trading the 69's (I still have the dupes from the box 2 years ago). I boo booed for sure. That ain't gonna happen again, at least not any time soon. As I said I need to clear my head. I did pick up several other pick ups that I'll be posting during May including 6 original Wacky packages tomorrow that I grabbed at the show.

Posted by Johnnys Trading Spot at 11:19 AM