The last 36 hours have been nuts here in Johnny's World. To start off with, I haven't had any help here in GA since Tuesday. Got help today though. But the really bad news is that my grandson Elijah who will be two years old on July 26th, had an "accident" at his daycare yesterday. I say accident, because that is what the DC is saying, but you can look up for yourselves what causes a high break in the femur in children his age. Poor guy is in a double leg and torso cast called a spica cast. 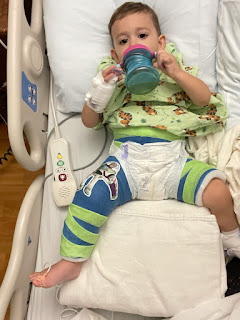 Little man is apparently doing well and came home today. He is a trooper and is handling it. We'll see what the coming weeks and months bring us. My daughter Hunter is doing less well as you might expect. Trying to figure out how to deal with this. I told her that she needs to do what she has to and get an attorney and let them handle the rest. I am going home to see my grandson Wednesday so probably skipping posting that day.

Now on to the abbreviated post of PC guys from the SportLots box. Again I chose just one set to highlight cards from.

See how they line up (bottom pair).

I had no idea there were so many different color patterns. .18-.25 each, couldn't pass these up. See, I said it would be a short post. I'll be doing the Jeremy post tomorrow.

Posted by Johnnys Trading Spot at 10:00 AM