I started out yesterday with a gripe, so why not continue on today. After all, it's been a pretty shitty (literally) day. ComC..... I've always disliked vehemently the slowness of ComC. Long before the Covid period, they had their shipping issues. But, it was worth it most of the time. 3 weeks ugh hated it so MUCH. There was a lot to love with ComC, say like scans front and back, often great prices can be had on the not so inexpensive cards. However, over the years 99% of what I bought were the everyday ole commons base set build needs or more likely just the base Braves. Cards that should have been a dime, were .30 minimum. Then I found cardbarrel well formerly just commons. That was so great base cards for .08-.13.....PERFECT LOVED IT. Those prices slowly creeped up, although I seen one for .13 the other day. CB has got somewhat inline with the GREAT SportLots at .18, still I'll take it. I love to buy cheap. Who doesn't? Last year I blew my lid with ComC with the delays. I swore them off, after upping my game to the more pricier rarer cards, and then waiting months and months and months and months. Somewhere, after that last bitch session I had (probably December 2020) about the delays at ComC, I fell into their trap again. Loading "x" amount of dollars in the store account, all to get a card or two I wanted. Then you use it up and I did, then request shipment which I did on January 27th 2021. A few days later Feb. 3rd, I got my "expected shipment" e-mail stating they would ship on April 29th. As that date approached Gavin posted about a delayed delayed issue with an order he placed, and I started to wonder.....Oh crap not again. He got his order with the additional delay. The next week I was expecting my "we mailed" it e-mail to come. Yeah, that didn't happen. I started stewing, you see like a dumb ass, after I requested shipment I threw a hundred bucks into the store account and slowly added cards using the funds, (I still have $15) so another ten bucks or so before I request shipping again. so yeah I am stewing, I still haven't gotten that e-mail saying they were on their way. The 4/29 date came and went. After waiting three full months, what's another day or a couple of weeks! Still, nothing so I wrote them, YES..... you bet I did some ass chewing and also explained that I would most certainly be writing this post! It would be a couple of days for them to respond with a May 14th, email stating my cards had shipped. However, they did NOT, I checked everyday and the shipped out on May 17th. 3 Day priority the box said when it arrive on Friday May 22. I of course ripped right into it. another hate is that you do NOT get an invoice showing every damn card you ordered. The cards are not in chronological order, just those little slips with each card. I ordered 155 cards and the receipt they sent says so. Right away I see an issue. Two boxes with individual tickets/receipt on each. One said 78 cards and the other 76 cards.  Although they (ComC) are in Washington where I guess they are using the NEW Math, I am not accepting 154 cards when I paid for 155. I counted them (154) and I put them in order so that I would be able to figure out what was missing (which I couldn't) BTW. Along the way I realized that one of the cards a 1991 Topps Desert shield card was not a Desert Shield card, those aren't cheap you know. I was pissed even more. 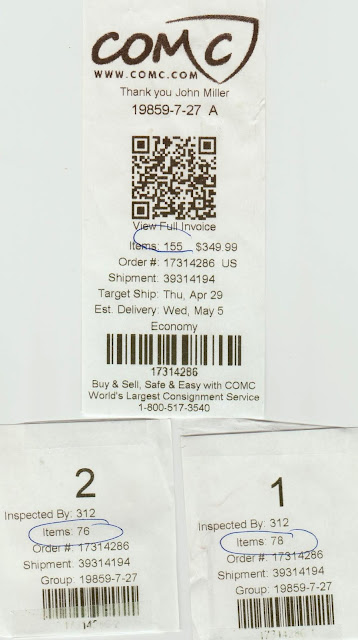 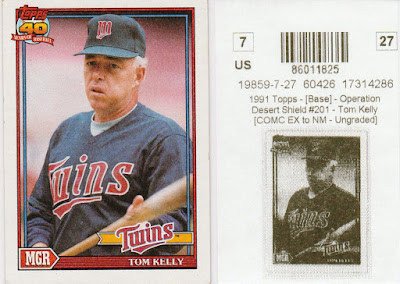 Needless to say, I replied back to the staff e-mail letting me know they "shipped" them. I still have not heard back from them. Can you imagine paying a few bucks for a 1991 Topps Tom Kelly manager base card? I tried to figure out 10 cards at a time on the ComC website for the shipment, matching card for card, as they can not be sorted into chronological order there. I get to page 16 of the shipping invoice and just 4 cards remain, hmm. Where the heck is card #155. Now I can not even figure it out what was missing. As I write this post, venting my frustration with ComC knowing I still have to request another shipment I may have figured out the missing card.....It is NOT a damn card, but the item is the shipping cost. I won't know until I hear back from them......if I hear back from them.

So, now that we cleared all of that out. How about looking at some of what I did get. 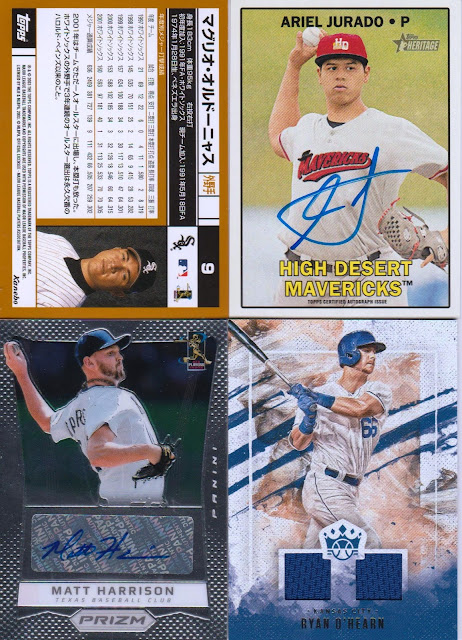 Three autographed or relic birthday boys and a Japanese Kanebo card of a PC guy. 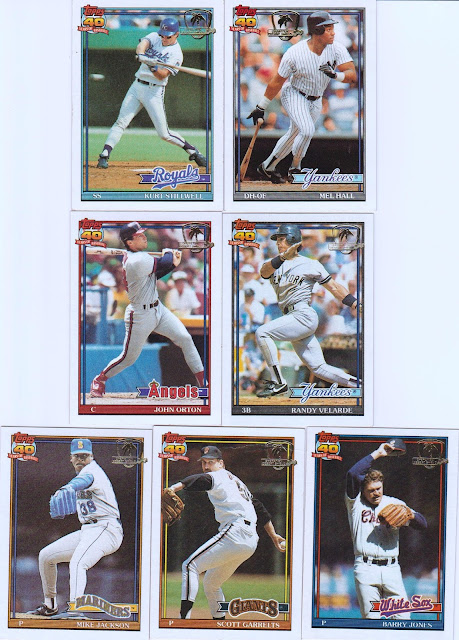 Here are the other Desert shield pick ups. Below.....4 vintage Hank Aaron cards. 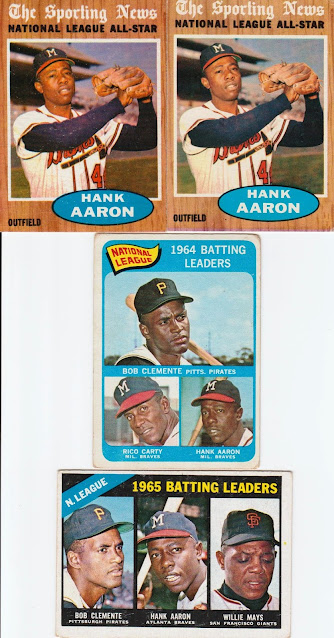 Yes, I knowing bought the two 1962 Topps Hank Aaron. It was in late 2020 when i made the purchase and was sitting in my cart when I decided earlier this year to STOP doing such things when possible. So it is still not wasted. I will put one in the PC and the other in the set build. As for the other two. Triple HOFer's and all PC guys, love em. 3 of the 6 are Braves....... 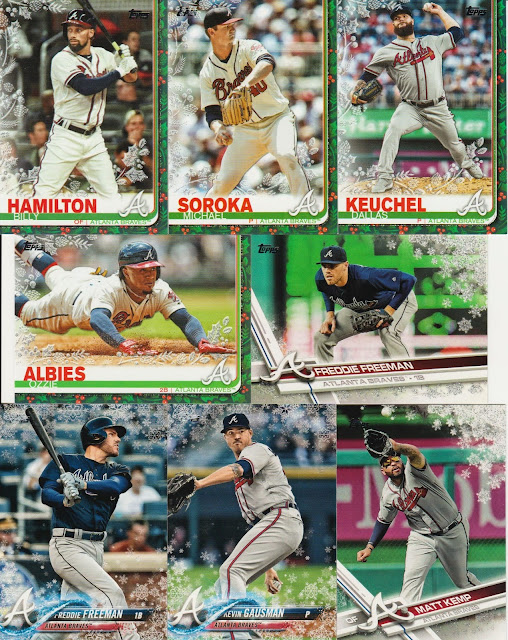 It is hard to see in the scan, but these are all the metallic snowflake parallels. 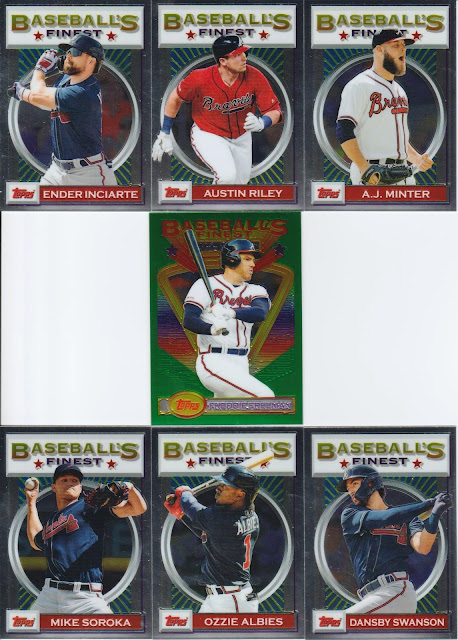 The Braves trio of 2020 Trbute and a trio of Acuna "special" cards. Turns out that with my impatience I picked up one of the Topps Choice Acuna cards already while waiting to get this one. Another gripe about ComC....too darn difficult to scroll through the shipment listings to see if it is on the way. My stomach is churning just now knowing I have apx. one hundred cards sitting in my inventory. 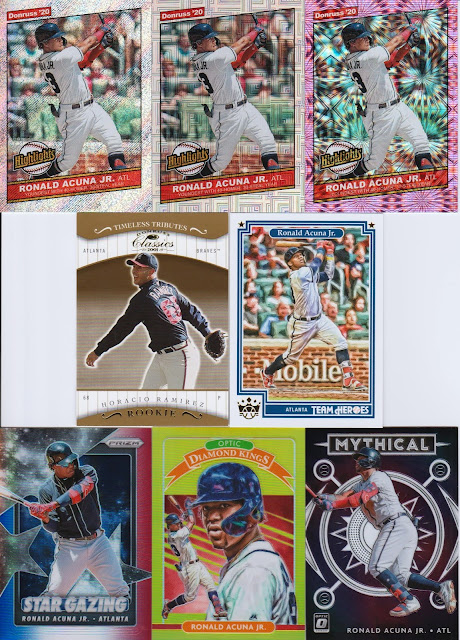 How is that for a variety of relic cards?

I think that this is a good stopping point for tonight. It gives you a pretty good idea of what will be coming in Thursdays post.

Posted by Johnnys Trading Spot at 4:52 AM