On Saturday September 5th, 2020 I journeyed outside to do something that I had not done in 8 months. Yes this was ONLY partially due to COVID-19, not totally. I went to a card show, the one held in Jacksonville, FL the first Saturday of every month. They resumed card shows back on July 4th after shutting down in April or May. They were only down for 2 or 3 months, but I had decided on January 16, 2020 to shut it down. YES January 16th! Not because of Covid, but because there were no "new cards" and really wouldn't be for several months. I wanted to wait until there would be dime boxes chocked full of the unwanted or unsold 2020 cards. I went to the Jax show the first week of Jan. Didn't like the assortment (keep in mind it is a 2 1/2 hour ride each way for me to go there). I told the guys/vendors back then I wouldn't be back for some time. The following week I went to the card show in The Villages back home (3 hour ride each way). That one totally sucked, and I knew then that I wouldn't be doing any more shows for awhile. I had been paying attention to the strange "new" sickness rampaging through China. It started way back in October of 2019. I had been following online stuff since November last year, so combine that with the disappointment at card shows. I was done. I shut my self down, stayed in the house other than Walmart for groceries. 2 Weeks later the country started shutting down. I cut back my trips for groceries from 3x per month to 1. We stayed safe. I have to be extra careful with my Uncle. I will always look beyond myself and no matter what comes in the future I will be socially distancing.

Anyways, ABC, CBS, NBC, CNN and all of the other crappy News channels we (without cable) we're forced to watch can kiss my ass. Now that I have cable and super fast (100G +) I can research stuff and do oh yeah...and think for myself. I have done this in the recent weeks (the research stuff).

Without having uncontrolled HBP (and other serious heart conditions), Diabetes combined with obesity, immunity problems, or Respiratory issues, the numbers are completely different. Only a tad over 6K people in the entire country died of purely Covid without any of the above health issues. Granted, I know in this country we have some unhealthy people. I do not have those, nor does my Uncle (of course we both could lose 15 lbs). Turns out even as bad as the 188K+ we lost, the odds of getting it  and dying are almost nil compared to the projected 60% of the population that was predicted would get it and the 2 million that would have died without that initial shutdown. My guess is that they actually did get the 60%, they just didn't know they had because they didn't get sick. This comes from where I am living where the 60% of population was pretty damn close. The majority of the deaths here were in nursing homes (still is), or brought in from other cities. Anyways this isn't about that. It is really about the next story.


I escaped my prison. I felt safe because I analyzed the data (the real data) and compared it to my own personal knowledge. Keep in mind my profession was knowing the complete medical history (and the finances) of my clients which are numbered in the thousands. Most of them actually having either HBP or Diabetes, and many with both. Throw in the lung problems which outside of allergies was minimal. 2300 people (my clients that were 70+ years old). I lost 3 total this year one was from cancer strictly and we knew that was coming. 2 ....just two lost to Covid because of there underlying health. One of them actually had cancer too and wasn't going to be here more than another week or two. His whole family got it, and he couldn't battle it like the others (he was a severe diabetic as was his wife, but she pulled through without any issues at all). I still have to reach out to about a dozen more, but that is it. I say all of this not to encourage people to revolt in the shut down (but it is time for the whole country to open), no I say this because we don't have to be scared to LIVE our life, just careful. Let's get back to doing the things we miss doing, just cautiously and without fear LIKE GOING TO A CARD SHOW NOW THAT THERE ARE CARDS TO BE HAD.

I did mention that there would be some cards. Well, tons (okay twentyish) of new vendors at this show. Most of them apparently started at this show back in Feb. They were all older folks too (60's & 70's).

The place was packed. I knew the first place to go was my buddy Fred, my favorite card dealer on the planet. He kept in touch with me every single month going back to last year when I quit going because of the ASS-HOLE dealer there). I HAD TOLD HIM, I WAS THINKING OF COMING. He was prepared. I got there, and right away, he handed me 3 shoebox (1600 ct) boxes of cards said free. They were all 2020 base cards for the most part. Bowman, Bowman Prospects, Bowman Chrome, Topps ser 1, Heritage, Gypsy Queen.  Wow, I won't have to dig through dime boxes. Not that I really needed many of those, but the stars were all there. I will say I still need  a 2020 Bowman Chrome Prospects Pache (BCP 5). There were no Robert Lewis cards, but pretty much everyone else.

This was a GREAT start to a card show. After Fred gave me those boxes, I knew I needed to buy some stuff from him. I grabbed up 220 higher end cards. He gave me a price of $90.00. I looked at him funny, he repeated $90.00. If you count the "free" cards that comes out to 1.8 cents a piece. If you exclude the free cards then the cards I will be showing you tonight and tomorrow would be .40 each.  Let's get started. The players included today and tomorrow are as follows:

Acuna, Judge, Lux, Alonso, Vlad Jr, Devers, Alvarez, Torres, Trout, Ohtani, Sanchez, Jeter, Tatis Jr,
Tebow. There were a few others that I just grabbed a single here or there, and didn't scan them. 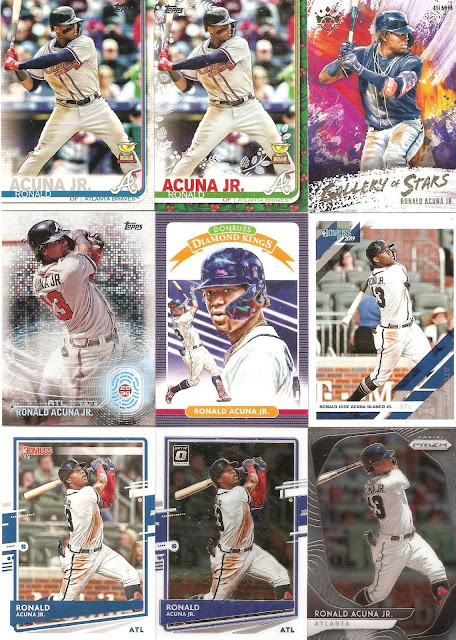 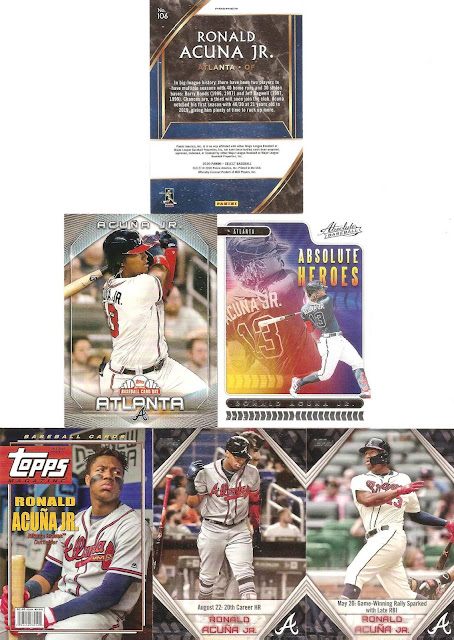 I really didn't need the Acuna's other than the last 5 cards. 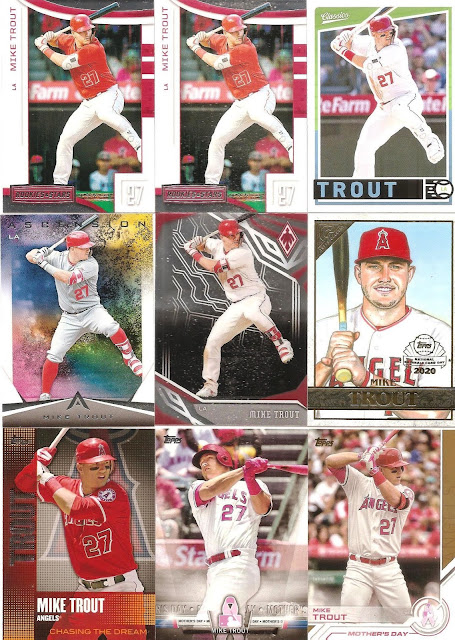 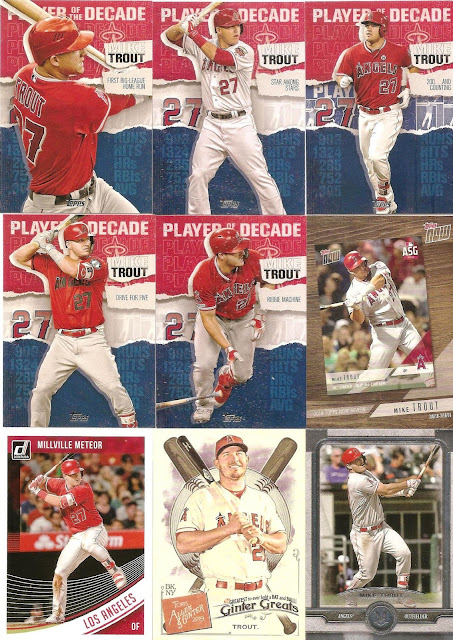 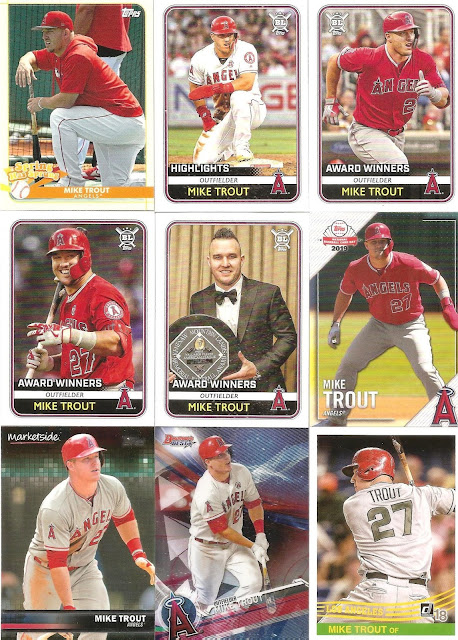 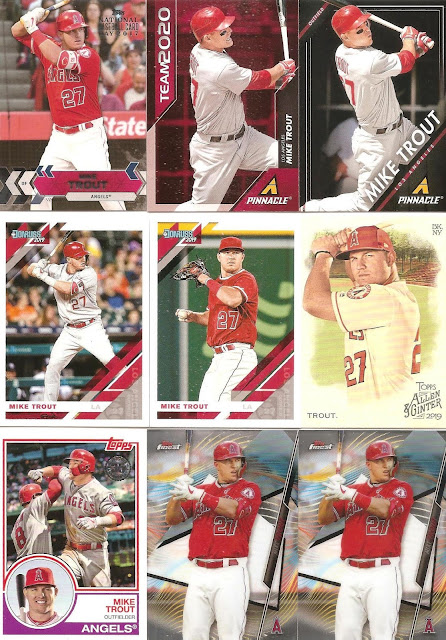 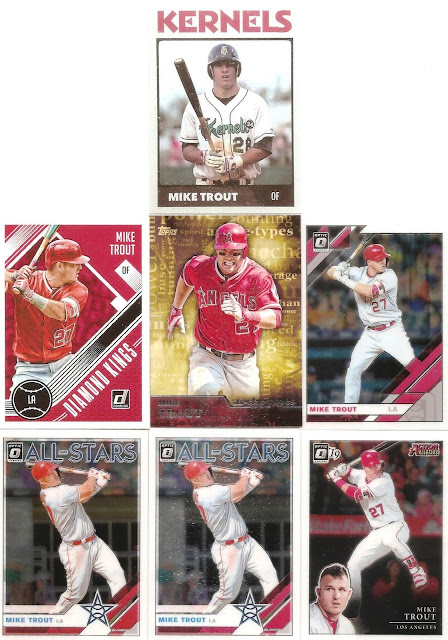 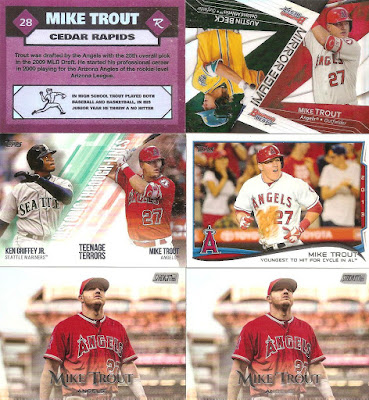 Yes, I knowingly grabbed dupes, and like Acuna, I did not need many of these and I knew it.
As for the Kernels card....I have no idea what it is. It is glossy, but not copyright information as you see on the card back (the purple above). 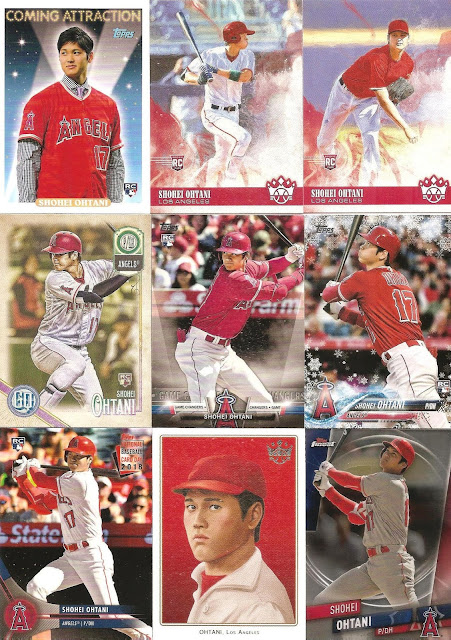 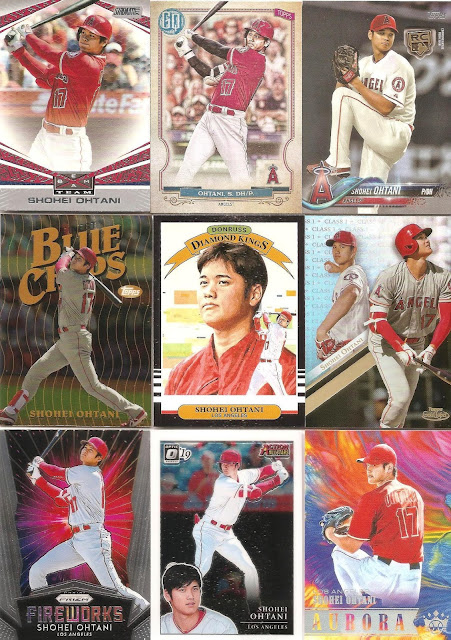 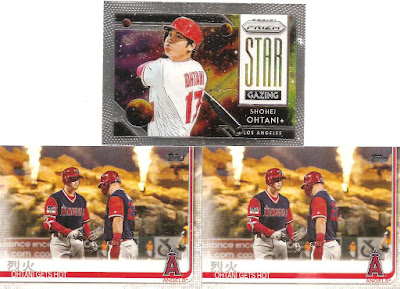 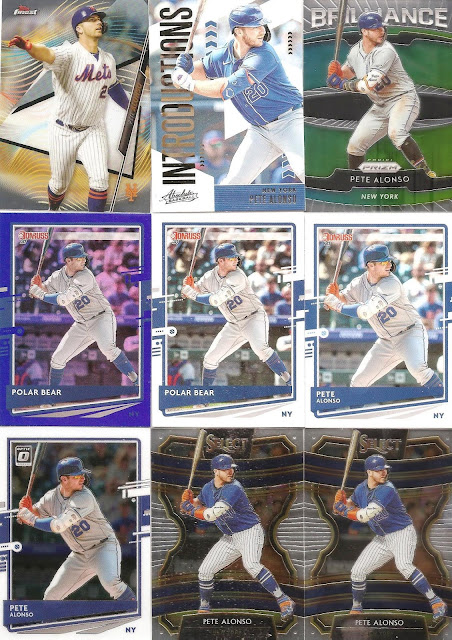 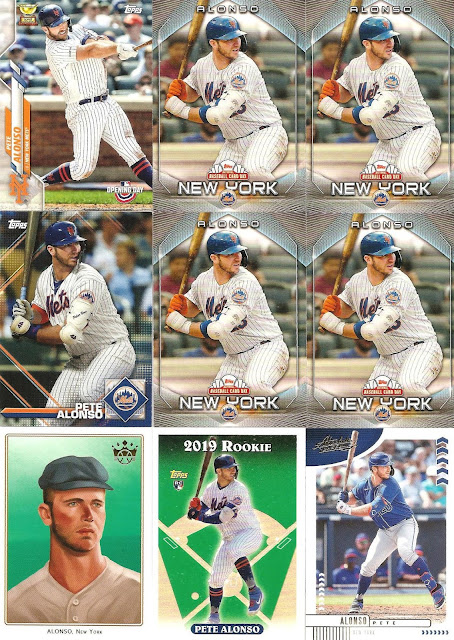 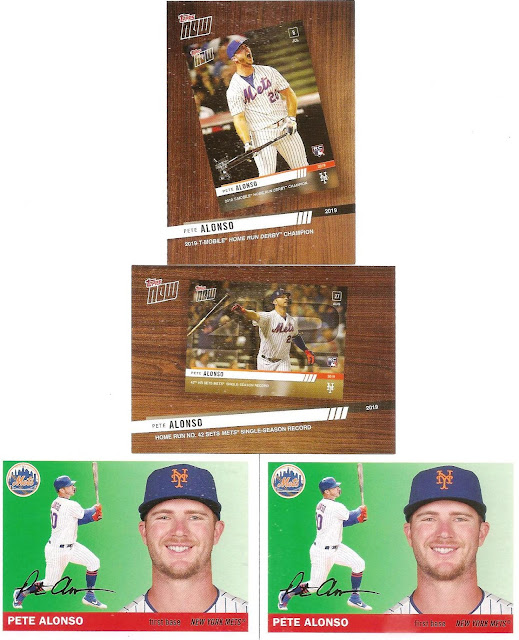 This is a good stopping point for tonight. I'll show the rest tomorrow night.

See ya. Go do something if you can. I know I am going to get a haircut in the coming week, whoo hoo. Taking my life back.