With no card shows (until July 4th) these last several months (5 months to be exact), my online purchases most definitely increased. My commitment was to use the money not being spent at shows on pages and binders which I did. Reminds me I need to order more. The last batch only lasted 1 week. This past week.  2 1/2 cases of pages, and 36 binders (I still have 12 blue binders left). No where I went overboard was all of the Cardbarrel, Sportlots, ComC (which should arrive in Sept.), and Ebay. All out of budget, today's budget. Probably right inline with 2 and 3 decades ago. I may have to reconsider and GO to the show in July.  Maybe that will curb my appetite. I don't know. We'll see.

Anyways, I laid the groundwork for tonight's post last night. From time to time I peek over at OPC.com to see what I can scoop up. They were doing a special on "lesser conditioned" HOFers. 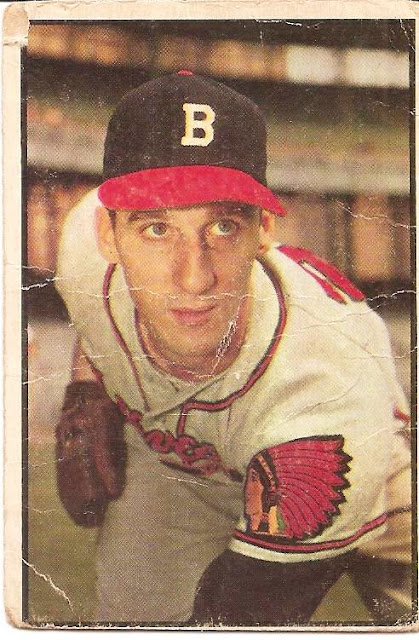 Yes, most definitely "lesser conditioned". 1953 Bowman color Warren Spahn, which I needed for my Braves Collection. This will have to do for now ....at least until the Easter Bunny puts a nicer one in my basket. (Of course the tooth fairy could always slip one under my pillow too). 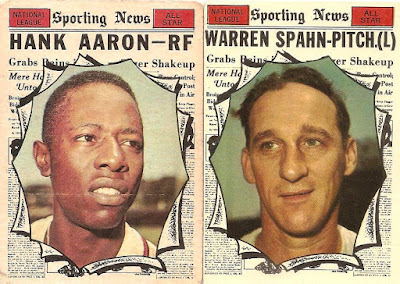 That is not a crease on Hank. It is a print mark. These two will work just fine in my 61 Braves. Two more biggies knocked down on the Braves needs list. Now to get two more for the set build. I told my self I was going to quit doubling up (tripling in some cases) on the big names. But I just can't separate my separate collections (Braves, Set Builds, PC's) as far as regular base cards go.


The next 2 cards went to my set build needs. 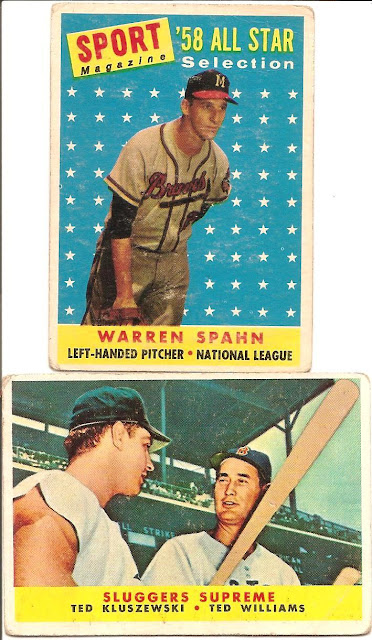 Nothing wrong with adding a pair of 58's. As yesterday's post clearly stated that I like buying cards on the cheap. All five of these cards did in fact come on the cheap. Well, for vintage Hall of Famers' anyways. $55.95 delivered. Not dimes, but still on the cheap.
Posted by Johnnys Trading Spot at 5:49 PM