Mr. Olson I'll work on your prize this week.

Now, for the post. I went to the Jax. card show Saturday, and took one of my sisters with me. No worries, she had a blast. I wanted to stay on the low side as I completely failed last month. So I planned on hitting my 2 favorite vendors at this show for catching the bargains. First guy, didn't bring any dime boxes of baseball because I had cleaned him out the last time, dang it.  Stopped at my buddy Eddie's booth and finagled my way into some dime cards he was asking .50 for.  Then stopped briefly at the next booth and browsed the $2 boxes, I grabbed twenty and tried to get them for a buck each, he countered at 1.50. So 2 tough ones in a row. I bee-lined all the way around the show to the opposite corner for vendor #2 Fred. He always has the most recent stuff out and I usually clean him out every time, but we were an hour late leaving Valdosta, and sure enough somebody else beat me to the punch. I did grab some non sports cards from him. I'll have to show them or one of them off later in the week. He even had some cards for my sister......Playing cards that is she collects them. He had 6 beat up ones said they were from 1909, pretty cool all in itself. Gave them all to me for $2.00 and still threw in another set of 70's playing cards of Quick Draw McGraw for free. When we checked them out the cards were actually from 1890, nice. I wish I had scanned them before she went back to north Georgia. First up, was that 2nd table I bought from. 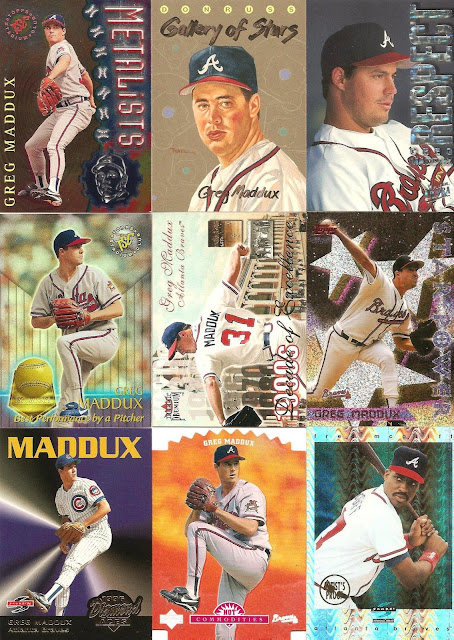 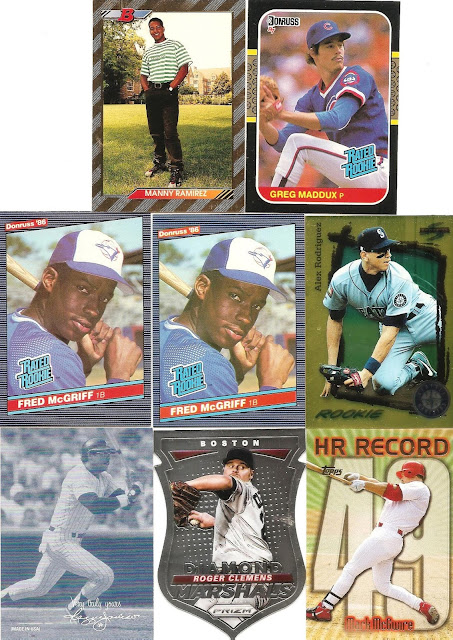 A lot of needed Maddux cards for sure. I definitely would've felt better at a buck a piece, but you can't win them all. I know there are some dupes, done on purpose. The 3 missing cards were Leaf RR of McGriff x2, and Maddux. I didn't need the Manny RC for the set build, so I am hoping I still need it in the PC, other wise I'll live.

Tomorrow I will start highlighting the dime cards. It will take at least 2 posts.