Cards from the RETURN

New blogger Brian (highly subjective and completely arbitrary) http://subjectiveandarbitrary.blogspot.com/  had sent a return BOX, medium flat rate box stuffed to the max so full that he also had to send another flat to get me the cards he wanted me to have.  Also noting that Brian is also hosting a break where you pay NO, nada, ZERO money for. I grabbed up the Braves and get wait to see what goodies come from that break. also noting Chris' case break of Heritage. get in while you can.

Now on to the door delivery from Brian.

The are all firsts to me. My first Red parallel for that set, my first black parallel from that Heritage set (I thought I had another, but I guess not), and my first 2014 Stadium club card. EDIT, I ACTUALLY HAVE THREE STADIUM CLUB, BUT THE CARD ABOVE IS FINEST. MY BAD. 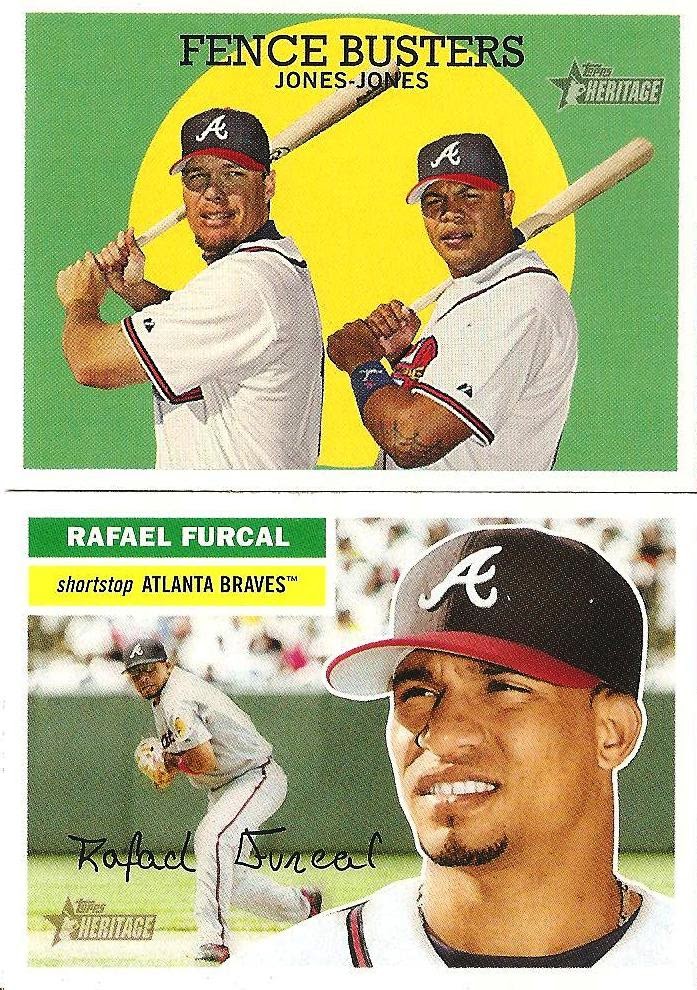 Again, another card I thought I had, but didn't (the Jones Boys) 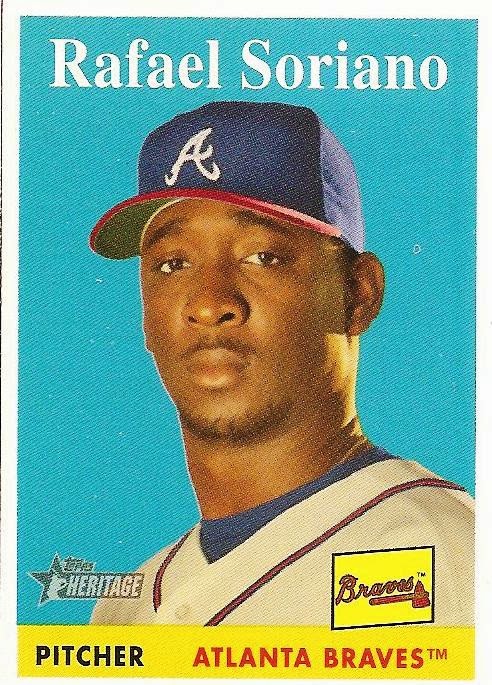 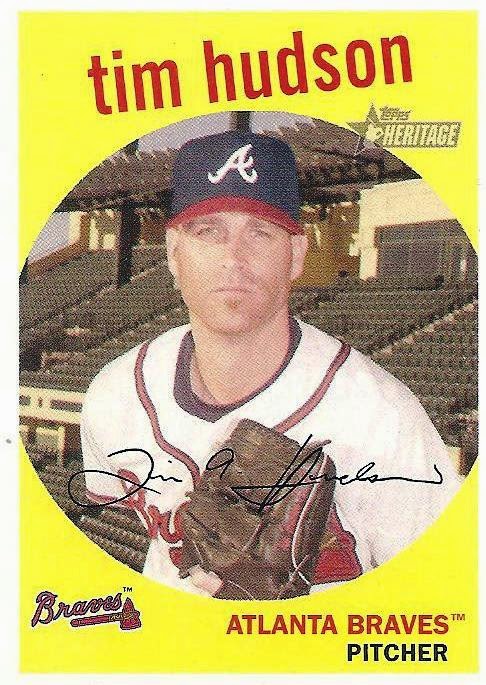 Knocking out those heritage wants piece by piece. 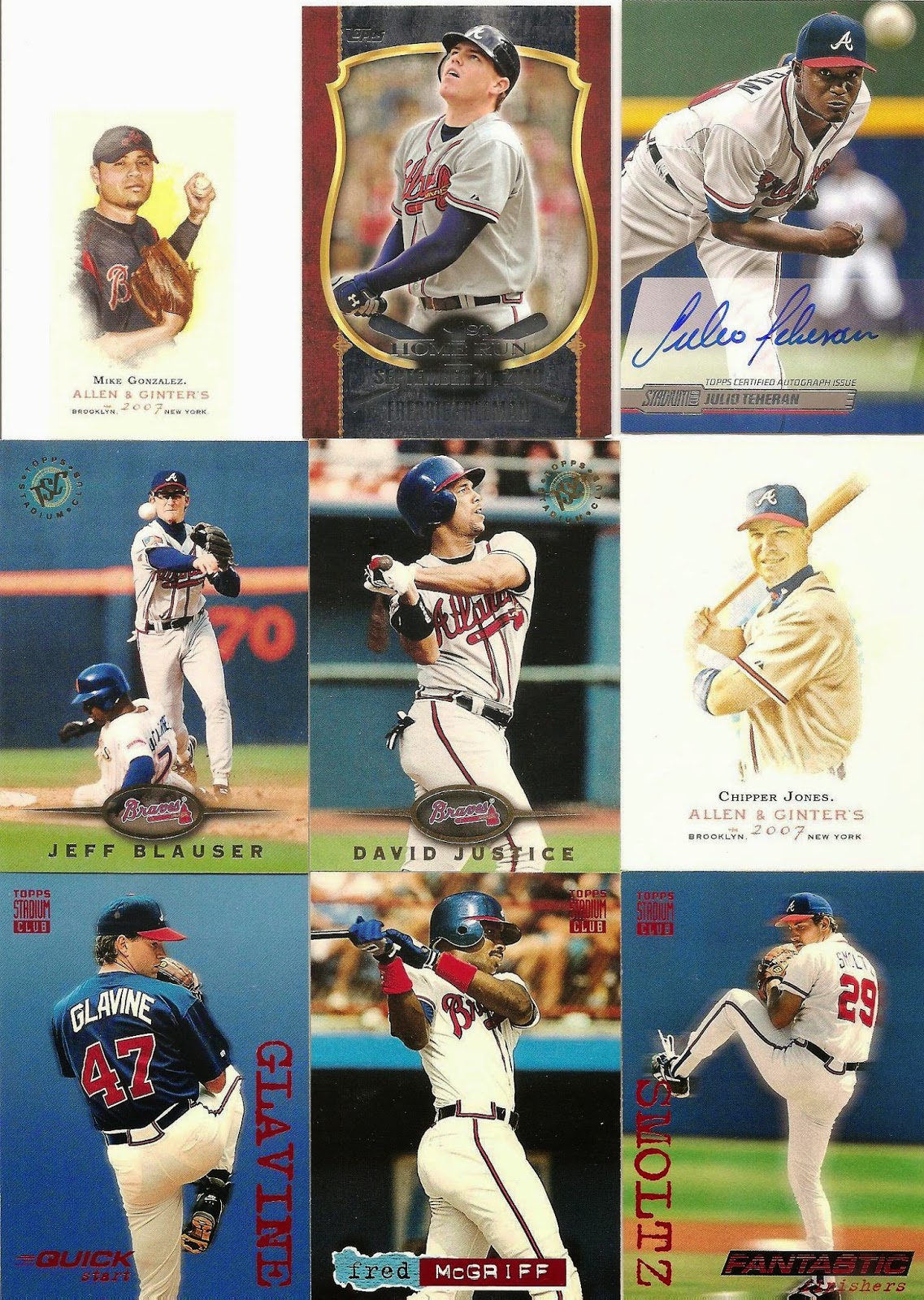 Check that On card Autograph and that would be my second card from 2014 Stadium Club! One more insert down on the 2015 Topps. 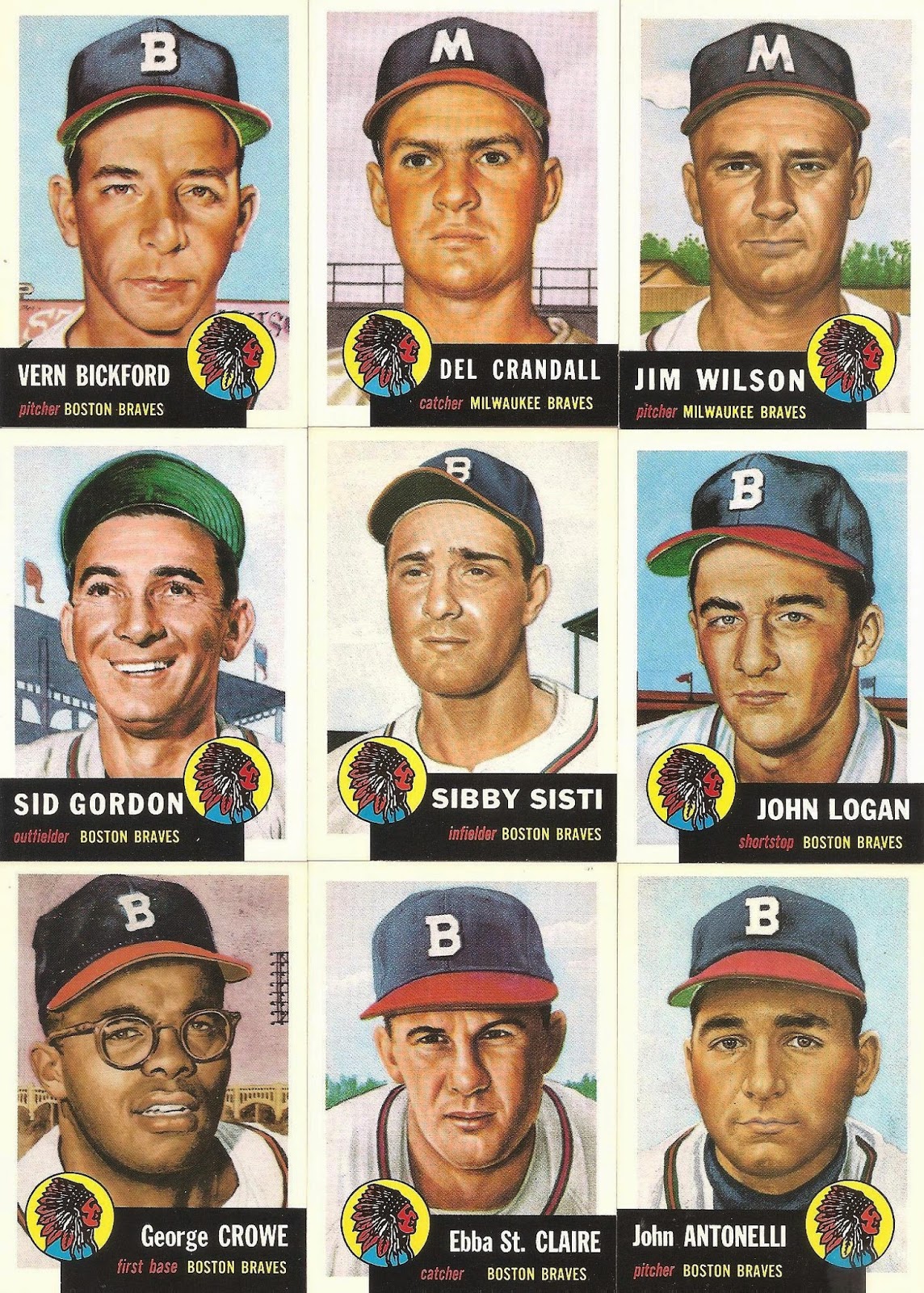 These are just 9 of the 1991 Archives Brian sent me, he knocked out that team set! HUGE thanks on that one bud. 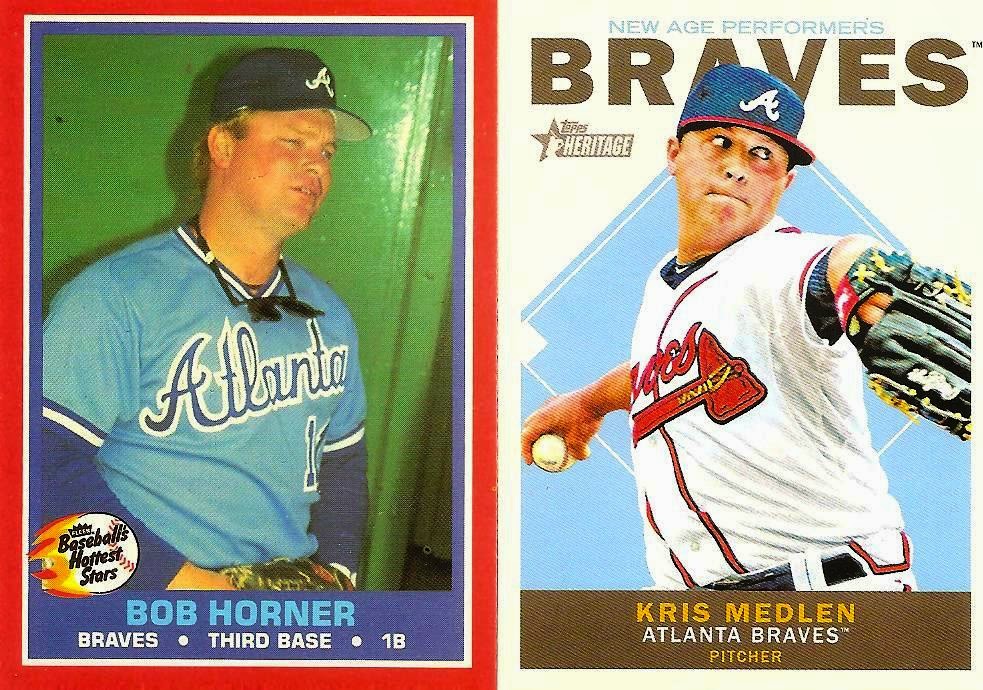 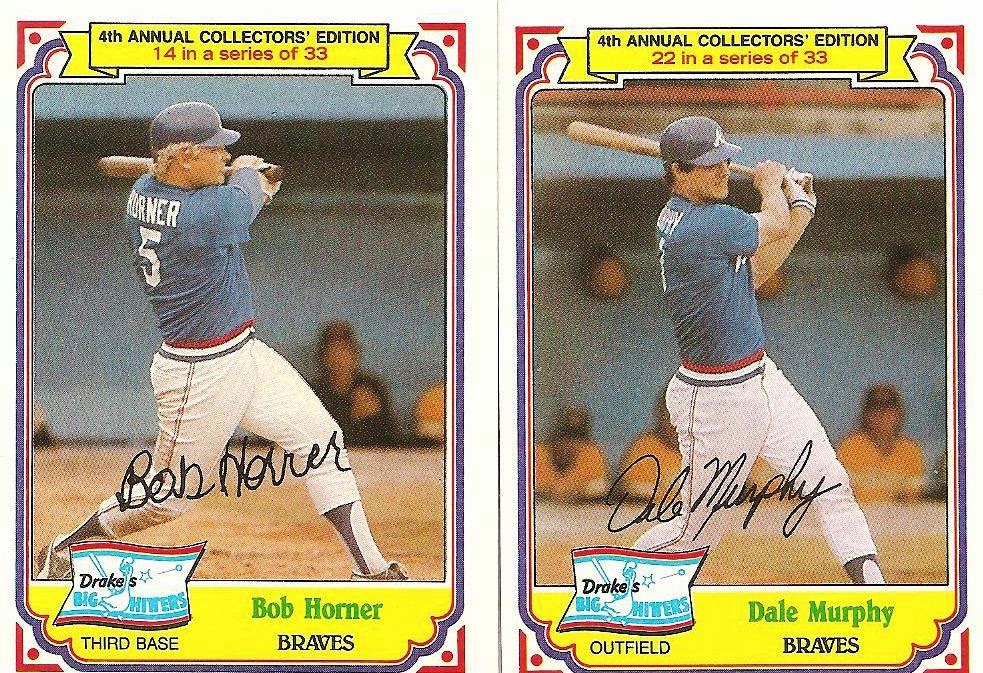 Brian sent along all but one of the 1984 Drakes card set. #10 was missing but I don't think he knew that. Either way works for me because all but the Hernandez fit nicely into Player Binders other than the Horner which goes in the Braves insert binder (Murphy has his own binder). 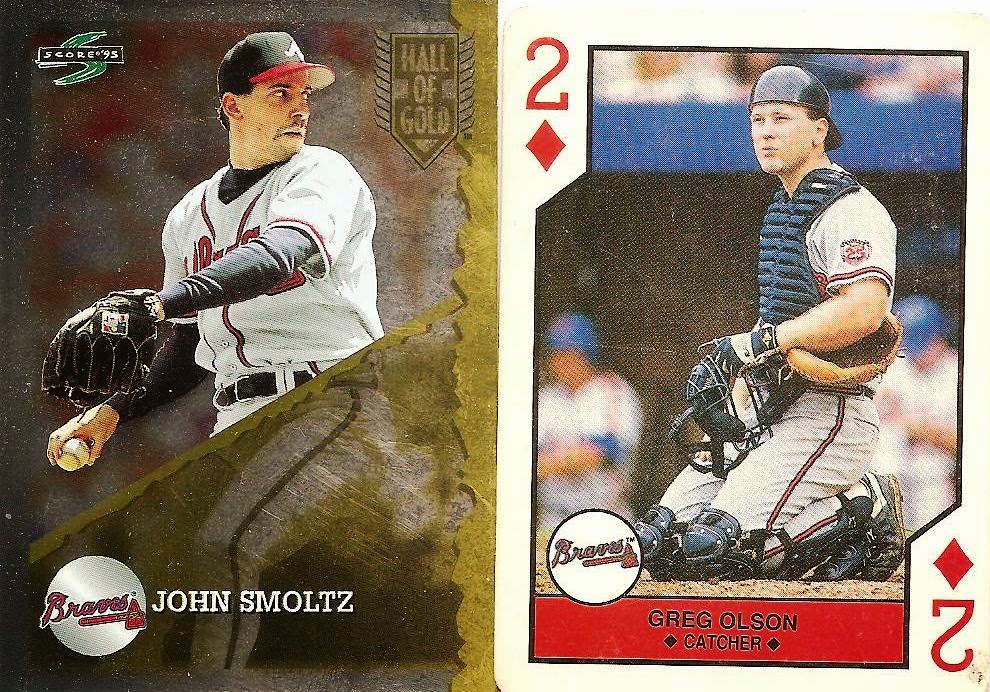 Love that Smoltz. Funny thing about that 1990 US playing card set is I still need the other Brave from that set the 4 of clubs Gregg Olson (the pitcher). 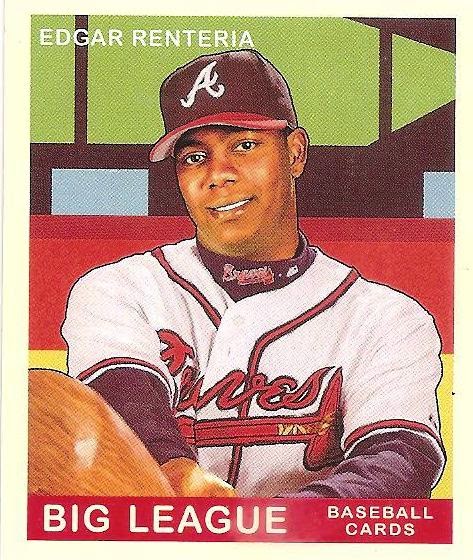 No Braves fan would ever complain about getting a Knucksie.  The bat barrel shot is kind of messed up, come on Upper Deck, crop the the picture would have been totally awesome card. Still a nice card but I'm just saying. 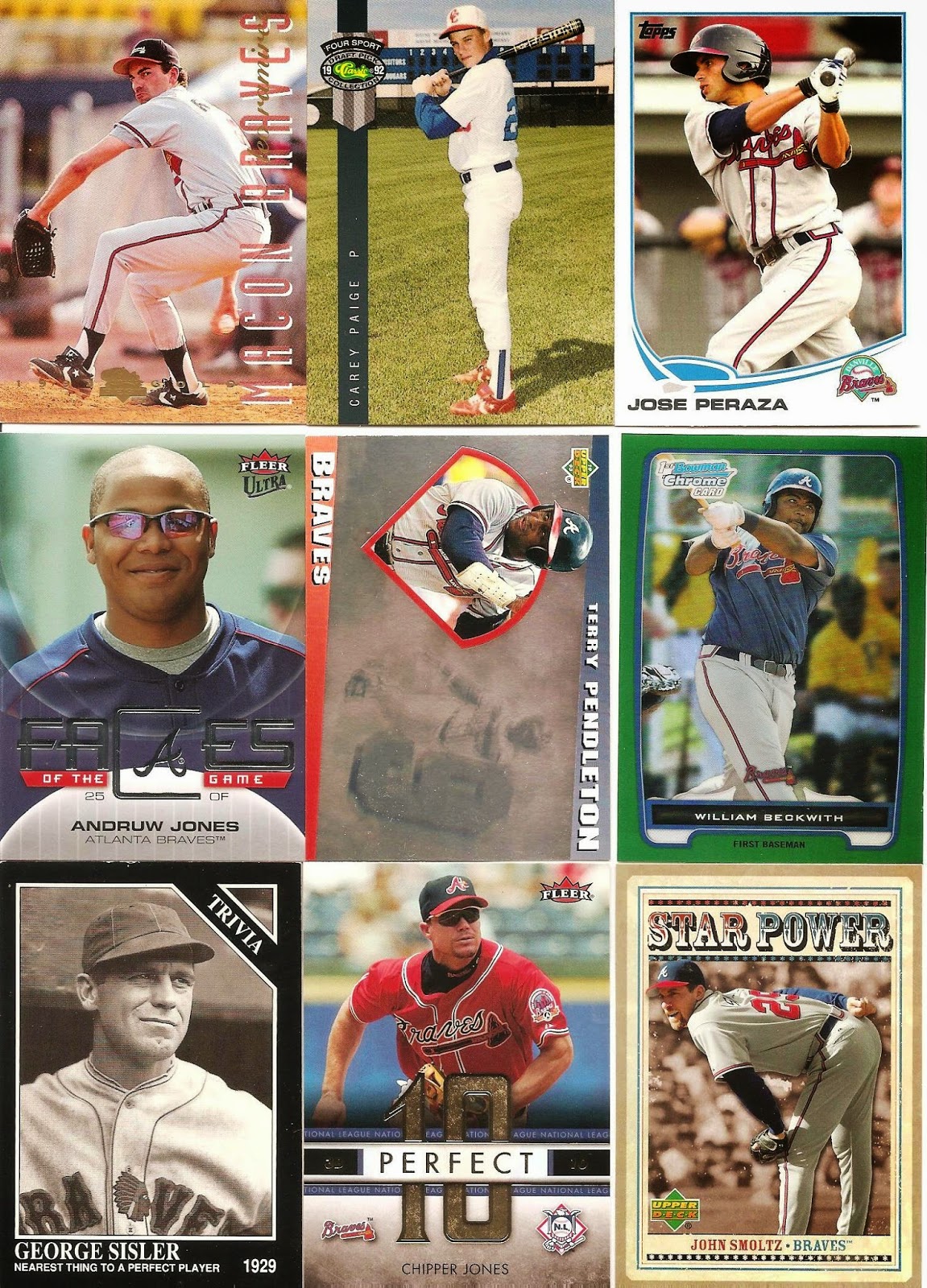 A little bit of everything here. Smoltz insert, Chipper insert, Conlon, Andruw insert, green refractor, Dennys, and a trio of minor leaguers. Would you look at the mug on Ramirez?? Pure hatred coming at you (the batter). 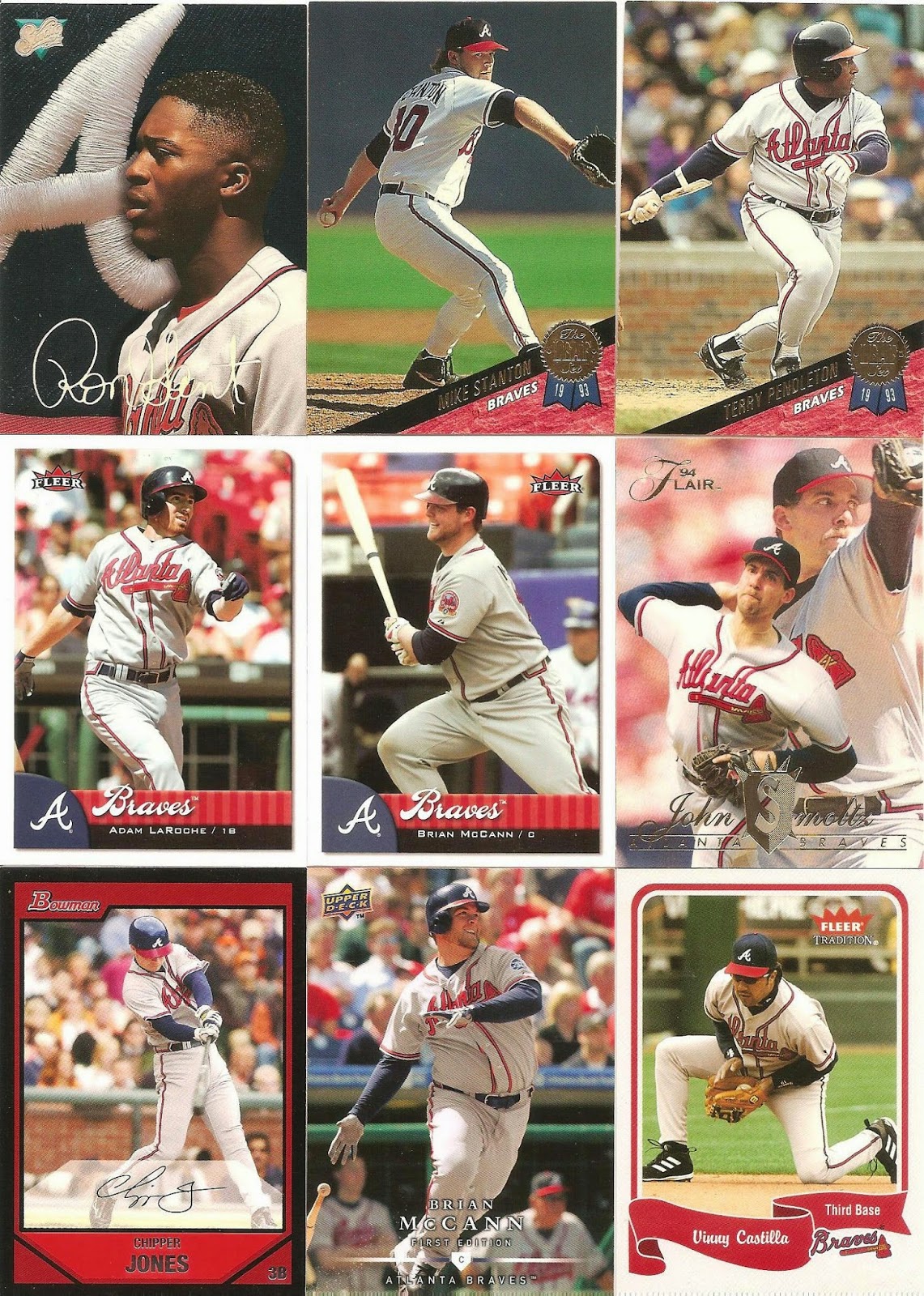 Filling some more holes in the want list (above). Below Brian decided to help out a few of the "mini collections" that I have and these I'm planning on keeping and maintaining for quite some time. 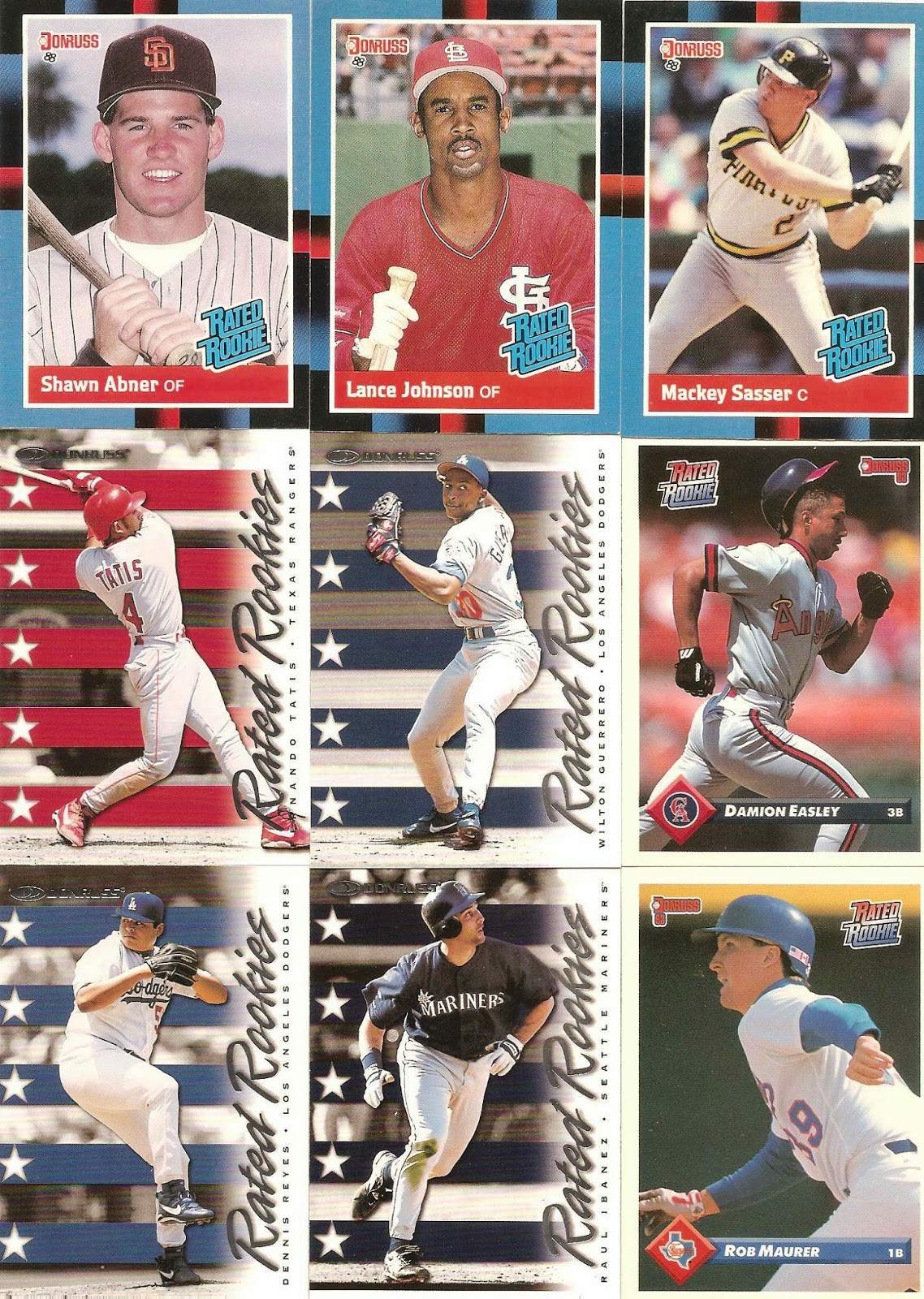 My Rated Rookies from base Donruss sets. 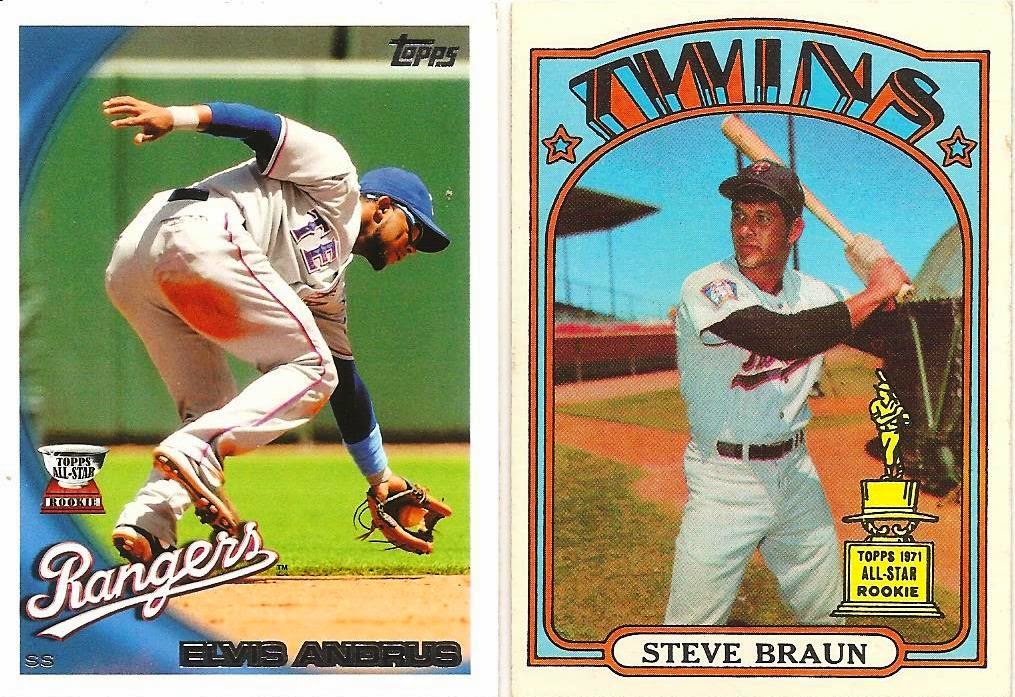 Here are a couple of All Star Rookie cups. I must say that I do not like the 2010 cup design. I didn't even know they existed. I will have to go through the handful of 2010s that I haven't given away yet to see if I have any left as that one is the first one in the binder. Oh yeah, vintage 70s  good stuff. 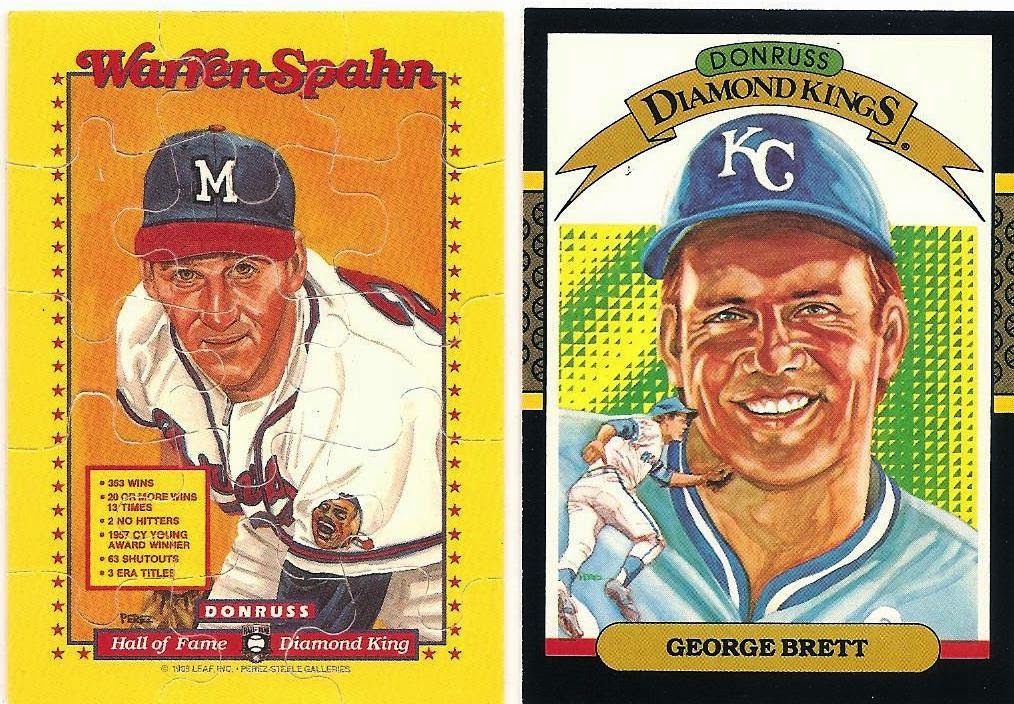 Totally an awesome hit to me was the Spahn mini puzzle. Also needed that Brett DK for my Diamond King binder. 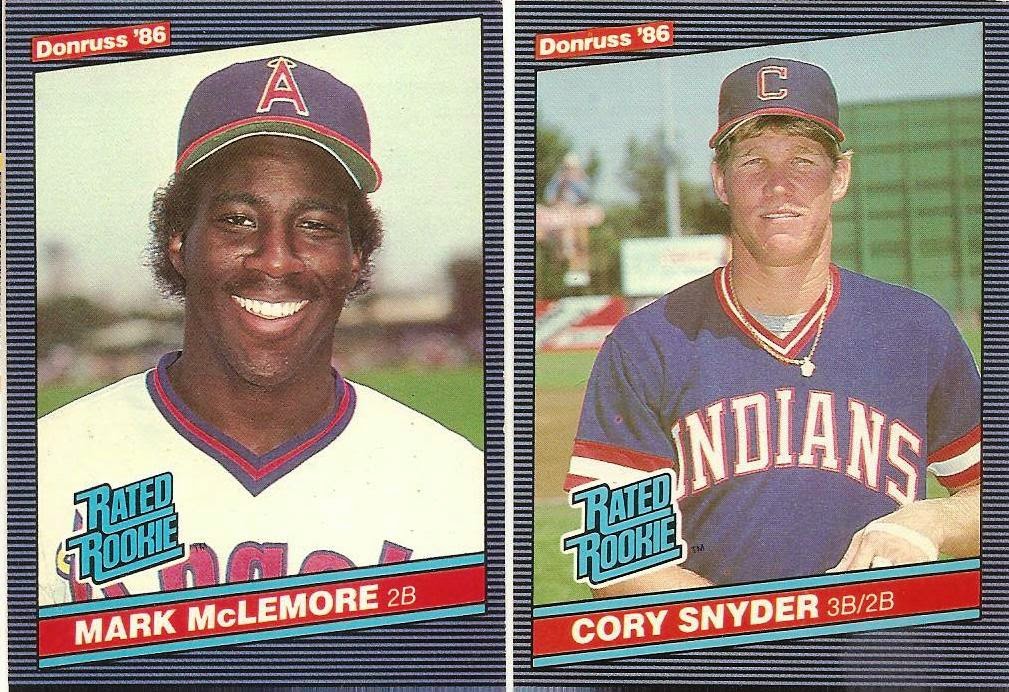 Some for the player binders. More on that 1993 Leaf set in a minute. 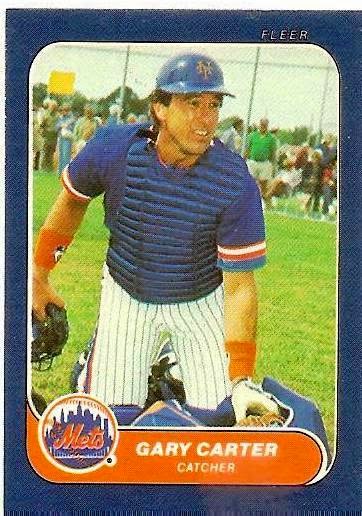 Some of you may remember that I picked up the 86, 87, and 88 mini complete sets and that I decided NOT to break them up to get the cards I needed for my player and mini collection binders. This would be one of them.

The following cards came in that second flat that Brian couldn't fit into the box. 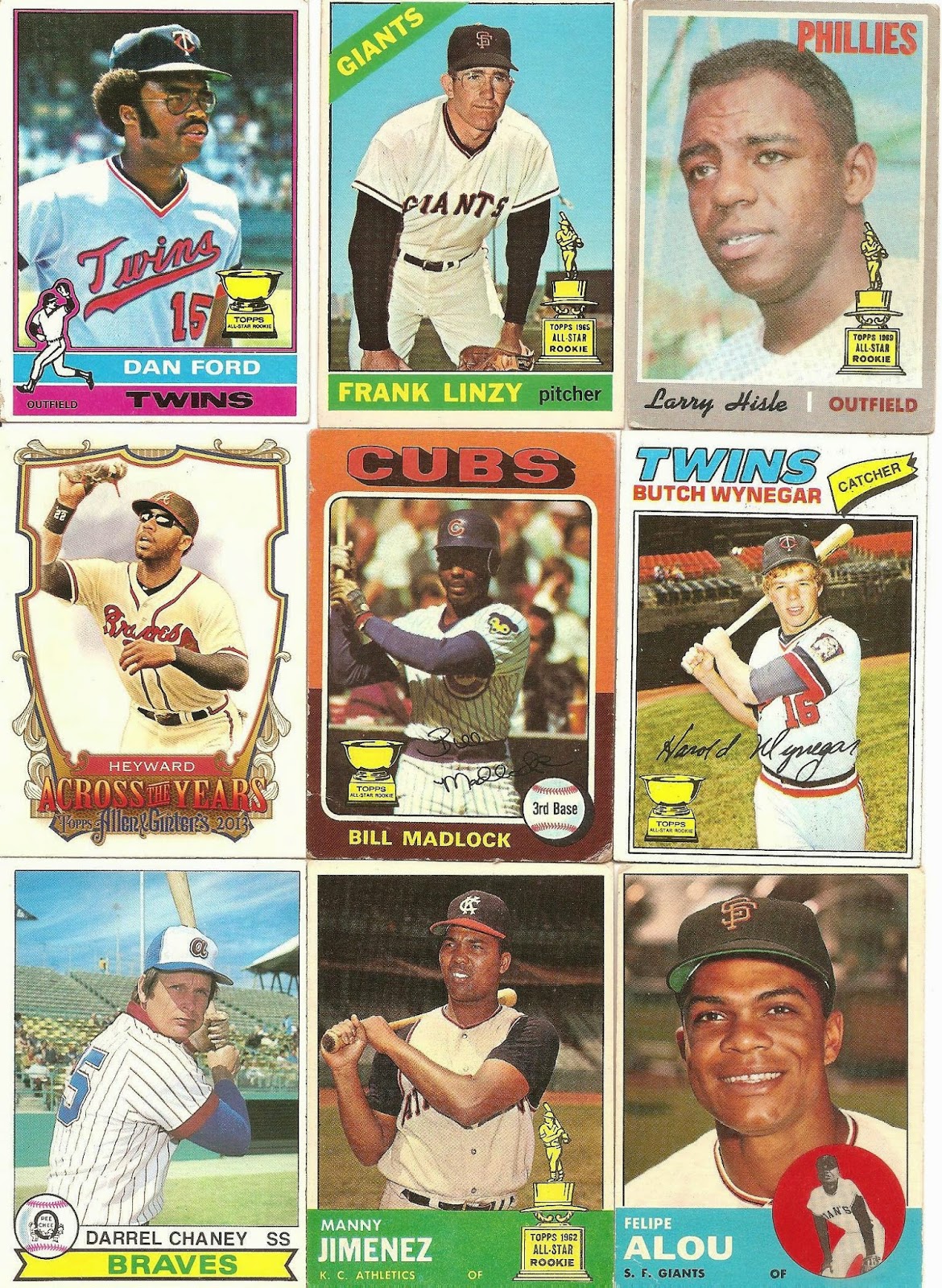 Brian had recently posted these I his blog and i scooped them up, well the 6 VINTAGE Rookie cups and the Alou. The OPC Chaney and the Heyward insert he just threw in as a boost along with........ 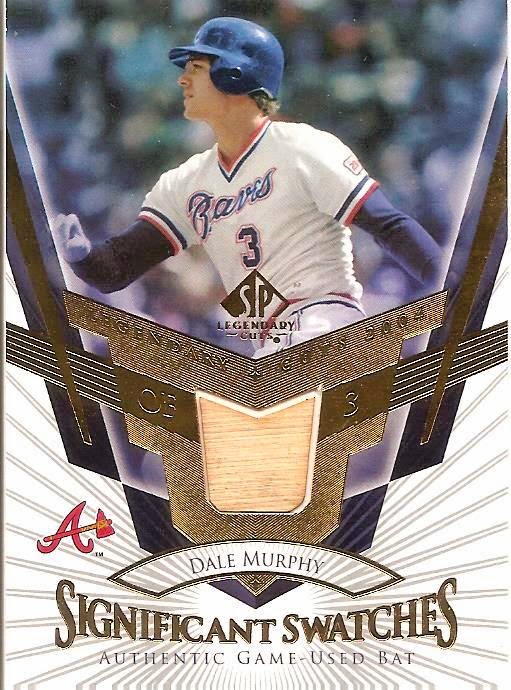 That is how you fill up a box!
Posted by Johnnys Trading Spot at 4:34 PM