The last purchase at the Villages card show was the biggest expense of the day. In fact it was the majority of what I spent for the entire day. Back in January at this same show, I bought several binders of less than perfect vintage partial sets. Not in my normal scheme of things, as I prefer super deals on the cheap and try to avoid having to upgrade. Those binders were more like 50% complete and were on the cheap, I guess. But those bucks add up quick. Well, I purposely was looking for that same vendor, to explain overall those last "binders" I bought (7 of them) didn't make me feel as good as I went through and put my hands on each card. I wasn't mad, I had gotten a great deal on them. But still, most of the cards will at some point have to be upgraded at least with a few of those sets. Some were great. Anyways, He made me deal on the less than perfect binders again. I walked away with just one binder.....the 57' that was 50% complete, with a whole bunch of HOFers. I negotiated the price down and had him throw in two singles one of which would go into the binder. Lets look at those two cards first. 1957 Topps Hank Aaron. Surface issues, but that is it really other than a soft corner. My scanner cut off that edge, it has 80/20 centering. This card now has been placed in the binder. I still need one more of this card for the PC. The Braves set already has one. 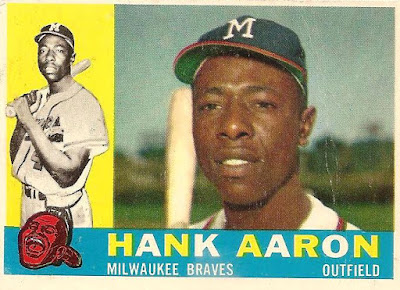 1960 Topps Hank Aaron. Light crease on the right side, otherwise the card is pretty nice. Needed in the Braves team sets. 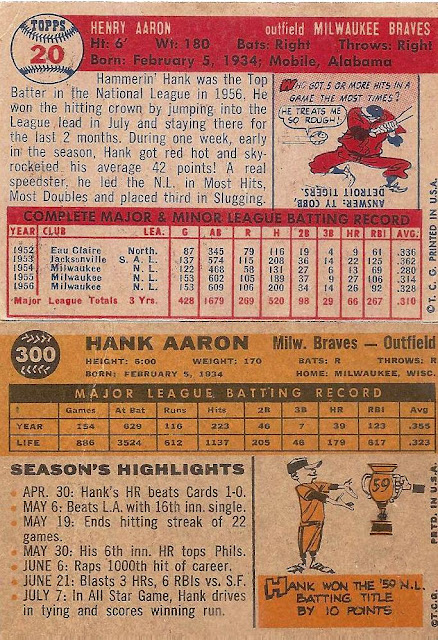 Well, I got you guys. By now you waiting on the binder of 57's. No, just a teaser tonight. I have 37 pages from that binder scanned already and will be breaking it up multiple posts that I will be doing on Mondays until we are through the 37 pages. THERE WILL BE A CONTEST AT THE END OF THIS SERIES OF POSTS. (YES, THE CONTEST IS ABOUT THE BINDER).
Posted by Johnnys Trading Spot at 6:26 PM