Okay, I finally figured out how to add some pictures. Unfortunately now I have to work on how my scanner saves pics. But either way at least i can put some pictures in my posts.

To start off with I have narrowed my favorite December cards down to 7. Not counting what is still to come in. 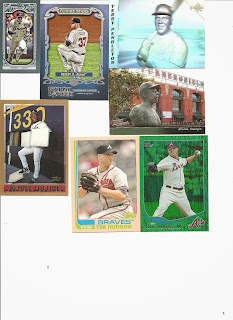 Its a start, hopefully in time I will figure out the scanner to just show the card at not the entire flatbed (1 at a time).

The card in the upper right corner is supposedly a statue of Terry Pendleton  (no likeness at all).
I really really like the Aaron bust at Turner Field. Who can complain about the rainbows (orange and emerald). Or the mini, I had a tough time not including the 1975 mini's in this contest, but opted to not included them as they have been around for a long time, at least for the favorite. Maybe for the toughest get though. Although that Aaron above is serial numbered to 99.
The Lofton card is an awesome card, if you check the stats on the back you understand why he is at the wall marked 330. He reached that number in stolen bases with Atlanta, finishing that year with 332.