How many times have you read a blog and seen that the subject matter was something you planned on posting? This happens quite often for me. Greg over at Night Owl Cards did it to me just yesterday. It isn't the first time he has done such a thing. It is almost like we share a brain sometimes. We have shared some of the rough spots in life and we are just a year apart, and we both are team collectors and sort of set builders. But with that said, what was N.O. thinking yesterday about being scatter brained? He certainly has one of the most thought out blogs around. Unlike this one. Greg does okay. Now, me.... that is a whole different story. Like Greg, I have been collecting since the mid 70's. Changing up from time to time just about everything. That is until six or seven years ago.

My collection is pretty much growing in the same direction as I should have kept all along, but our brains get these ideas and off we go. No, I am not changing up my collection, at least not intentionally. This weekend, Saturday to be specific I was working on those "hobby goals" by clearing up some of those "stacks" of cards I have all over the place. I started with the "set build" cards that needed placed in their binders. Long story short (because this was just going to be a note and note an actual story) I still have the intentional post to get to), I was kicking butt, I moved about 500 cards from the set build stacks to another room knocking down what I was seeing everyday in those specific stacks in half. I know that doesn't get it done, but those were the Upper Deck and Pacific Brands that I haven't done much with and will be the last ones I do. I don't have room here to have binders of cards at my finger tips. I'm okay with shifting them to the other room. The other half I was knocking them out left and right until I hit a the 1965 Topps cards. (Here is the short part). I had TWO, different 65' binders. What, how, when did this happen? I have no idea, because I've been working on those binders for 6 or 7 years. Never noticed or realized this before Saturday. Now, that is scatter brained and is a doozy. Stopped what I was doing and fixed the issue. But, that wasn't the only hiccup Saturday. Now, I can not find my 1958 Topps binder. Nowhere to be found. No clue, those are two buig doozies to contend with. 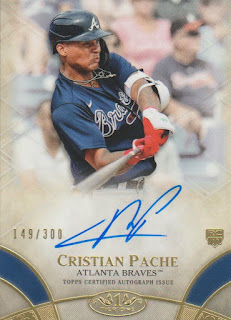 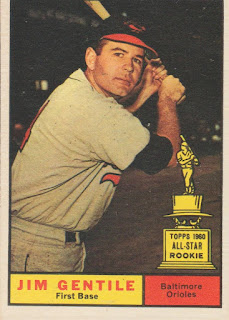 Here we have the final the very last Topps Trophy card needed. I now have the completed run.
Posted by Johnnys Trading Spot at 8:46 AM