The year is starting off okay..... so far anyways. Two weeks in and I have done pretty good (as far as cards go). Different story in the non card world. I am thinking that one of the new workers has Covid. I sent her to get tested yesterday as her grandchildren's test came back positive yesterday afternoon. They told her she would have to make an appointment on line (where they are scheduling 3 days out). This is nuts for me trying to keep my uncle safe and me too. By the time she gets a test, then waits on the results she will be over it. She is coughing and has a runny nose. I am doing most (99%) of her work so that she does not get close to my uncle. Mainly staying 10+ feet away, and just watching him so that I can do some work outside. Scary. Also, but on a better note, looks like I am getting real close to the foreclosure I am handling for my uncle on a property he holds the note on in North Carolina. Prayers appreciated on the Covid thing and the foreclosure moving quickly. (I've been trying to foreclose for 5 years).

Now let's get to some baseball cards.

But, I made two BIG deals at show. But first, a few other side deals. 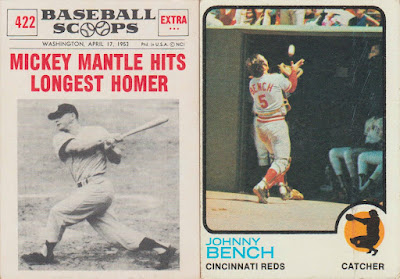 I am hoping that the Bench is an upgrade. I'll find out soon when I check the binder out. 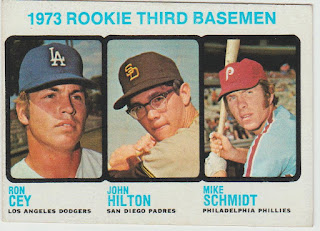 Okay, it is not perfect. Miscut not trimmed. This addition gets to me needing just one more rookie #614. Not a biggie either. I might even have in on order somewhere. 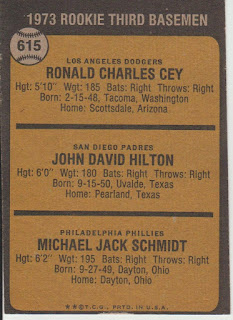 Here is the back of the Schmidt rookie. Alright, and some guy named Ron Cey too. 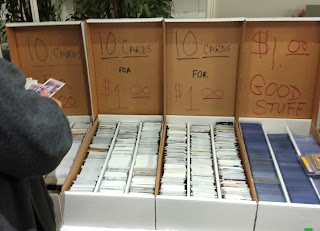 Yep, dime boxes. There must have been 50+ at the show last weekend. There were also quarter boxes too. Maybe 2 dozen with nearly half of them vintage.  So I made a deal on 3 of the quarter boxes (non vintage) because I did not want to sit there and go through them with tons of people (literally) constantly at this dealers tables. I made a deal on 3 monster boxes of them. I went higher than normal for me because of the content of these cards. LOTS of current sets and all super stars, rookies, inserts and parallels. More on those in another post, but basically the deal was a nickel a piece.

The 2nd deal was on dime boxes. One dealer (not the one above) cleared out enough for me to have a seat and stay away from others while I searched. He told me to fill up a 800 count box and it would only be $20.00. I started digging. I got through two monster boxes and already pulled 3 800 count boxes worth. He had 1 other customer at the time and they day was nearly over. I waited when the other guy finished. I made my move. 7 monsters boxes. A penny a piece. I wound up in total bringing home 25,000 baseball cards. I have a lot of work ahead of me. I have gone through and sorted the 3 nickel boxes. I've scanned some lots more to scan though. I also went through the 3 800 count penny boxes I had already pulled. I scanned some of those with the nickel cards. Lots more to scan there too. Plus, I need to go through those 7 boxes. For the foreseeable future I will posting penny and nickel cards. 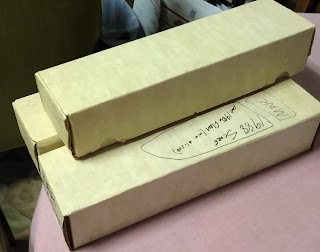 Here are those 3 boxes I filled by just going through 2 monster boxes (and I was leaving cards as I went through). I will be busy getting this stuff posted, but I'll get it done. I am also going to a card show back home on the 22nd. There, I should pretty much be sticking to vintage. Speaking of vintage cards. I did grab a few out of a quarter box. I only sparingly looked through 1. 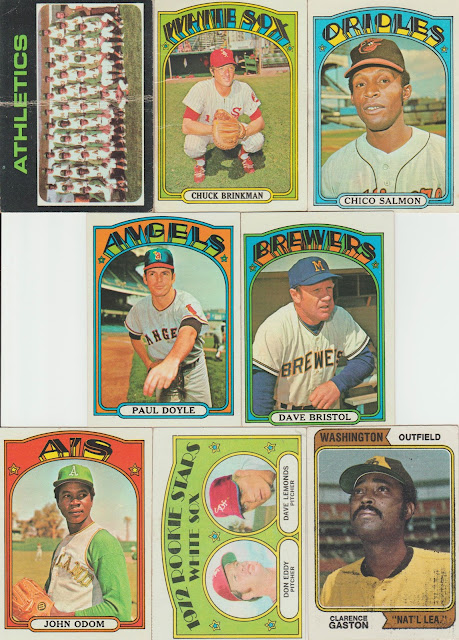 These 8 were all set build needs. I will have to upgrade that 71' and one of the 72's. I'm okay with the dirty Washington variation. I might try to "clean" it.  some of those 72's are high numbers. 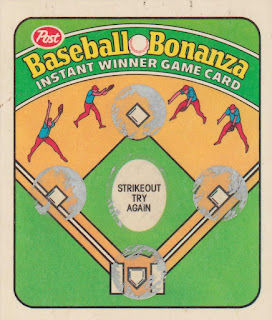 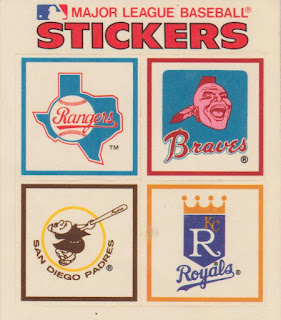 How could I not spend a quarter on this. 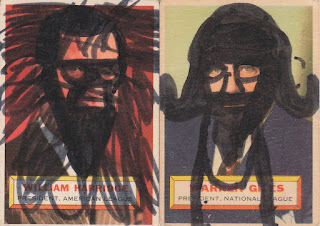 And this pair is earmarked for Mark. I couldn't leave them sitting in the box. I even grabbed a second one of Harridge for one of my "one day Franken-Sets".

Have a great night.