Let's start tonight off with this tidbit of info.

I think Topps was seeing the future and was squeezing every last drop out of their run.

Okay, let's get his party started with some "Wacky" cards. Actually, Topps called these Wacky Ads way back in 1969. I had a few already and recently picked some more up off Ebay. Here are the recent additions. Well, I thought I already had a few. If I do they are probably back home in Florida and not listed on my excel sheets. 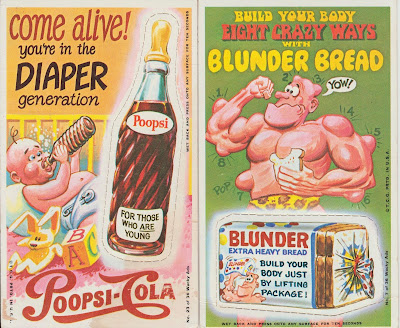 These are slightly smaller than a "normal" size post card. Just slightlylike a quarter of an inch either way. 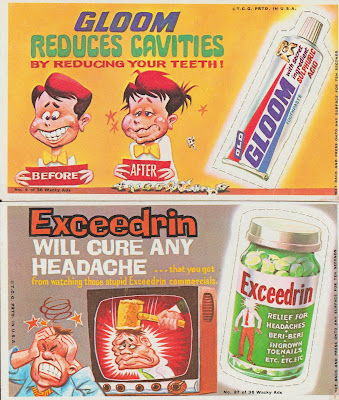 I think that I've posted about these before and that I believe these were the forerunner to the Wacky Packages sort of. I'll explain later. 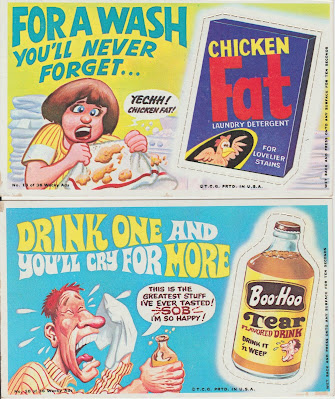 These 6 newbies bring me to a total of 6, lol. I can't count what I don't check off my excel sheets. Anyways, the set consists of 36 ads/cards.

Topps also released some Wacky Packages that were called punch outs or die cuts even earlier in 1967. I have one of those (punched out). It was a release of  originally 44 die cuts, that due to cease and desist orders there are an additional 12 die cut stickers. I say stickers because you were supposed to lick and stick them. It didn't work well which is why the peel and stick Wacky Packages came about 6 years later, first run were cloth and they didn't work well either. In any case the 67' release are the same as the Series 1 in 1973 cloth and normal. There were 14 titles not repeated though for the obvious reason (cease & desist orders). One of those orders was Morton (Moron) Salt, which according to data in 2008 was still fighting. Not sure where it stands now.

Back to the 1969 Ads, they too had a forerunner. Yep, ten years earlier (1959) Topps put out an 88 card set called Wacky Plaks (noted clearly on the backs). Even smaller than the 69's Ads. They are more inline with the old Tall Boy basketball cards in size except these were horizontal. I definitely posted a few of these before, maybe last year. I just picked up 55 cards from that set to go with the few I had.  There was also a reprint set of the Plaks in 1965 in Canada same titles just different numbering, but these were called Kookie Plaks )also noted on back). Easy to identify the two from each other. Then in 1982 Scanlen's in Australia reprinted the Wacky Plaks but only 84 of them. They clearly state Scanlen's on the back. I recently picked up the entire Scanlen set and should have them in a few weeks. They are coming from down under.

For the next few weeks I'll be showing some of the 1959 Plaks. I think I can squeeze 3 posts out of them. I may just do two, we'll see. Anyway, when the Scanlen's come in, I'll just be posting one of the backs so that you can see the difference. Obviously the fronts are the same on all three printings.

Have a great night.