Over the last several weeks the News had been reporting on the tragic death of Kobe, his daughter, and the 7 others killed in the helicopter crash near L.A. The memorial's and such. May they all rest in peace. Then a week and half ago the murder of Drew Carey's ex-fiancee Dr. Aime Harwick hit the news. The other day some "talk" news show mention that she had worked for "Bench Warmers" as Aime Nicole. That rung a bell in my head.


Then yesterday I was going through yet another box that I brought back from Ocala on my last trip. 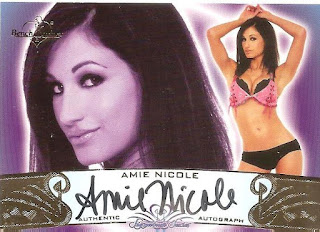 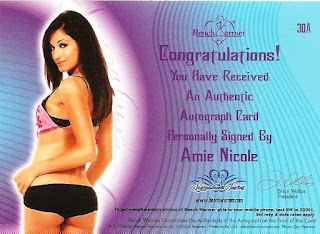 Such a tragedy. Beautiful girl, and apparently sweet as could be. Pretty sure I sent Gavin a copy of this card too. May she too rest in peace.


I'll post up some trade packages on Monday (Fuji, Bo, and Brian).