I thought, I think, and still not sure.

It is often hard to constantly be 3 hours away from you baseball card collection. It makes it hard for the type of trading I used to do (100's per month). It is also difficult to know with 100% certainity that you actually have something. Don't get me wrong I have lists. Old fashion paper lists, my web page with those want lists, excel sheet for off-line look ups, but sometimes you realize that something isn't right. Like last month's card show and a few trades I did regarding my 1971 Topps want list. I found the a couple of updates didn't take. I have since corrected that issue, but you never know.


Recently, I noticed I had no information regarding the 1994 Topps Traded set. I thought I had it, I still do think I had it. But, nothing "AWAY" from my collection could prove it. So, I bought another set. What the heck the old Traded set were great. 132 cards and in this case a bonus 8 cards. 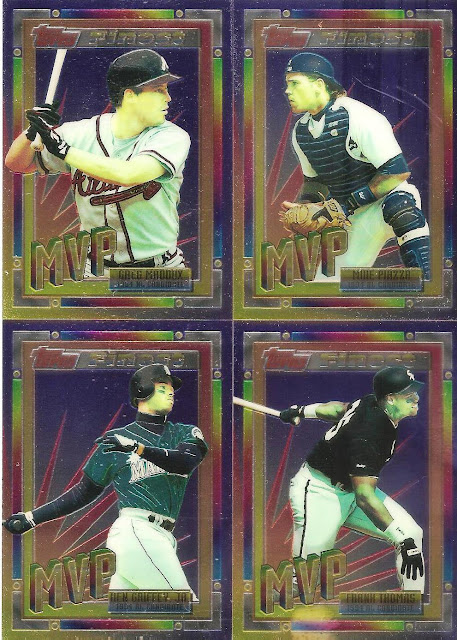 The 8 bonus cards were MVP Finest cards, again I think I've seen these so I must have them already. I know I already have the Maddux in his PC. 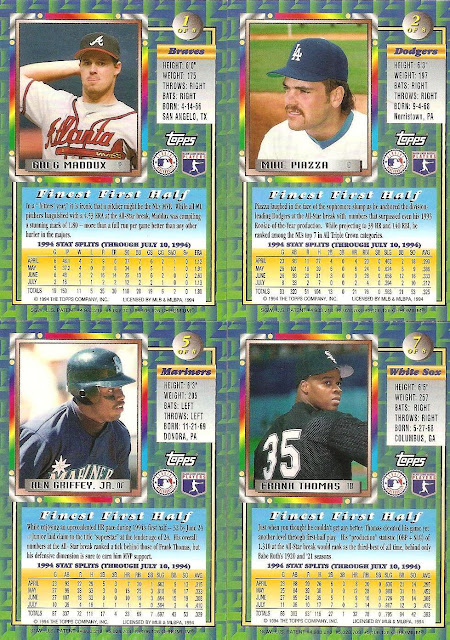 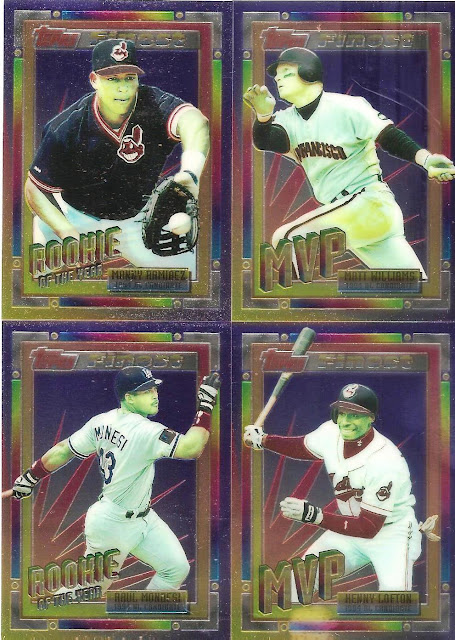 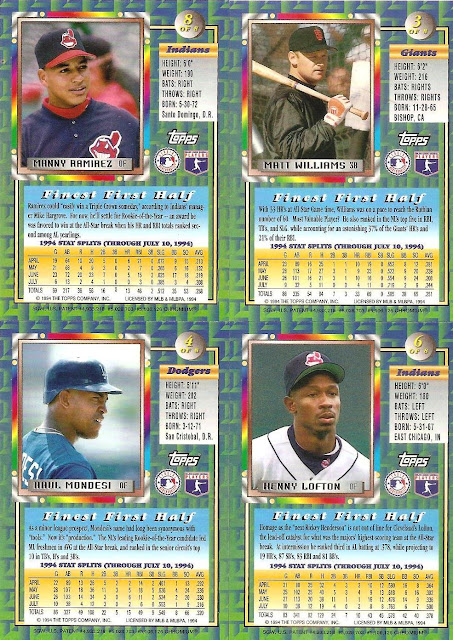 Seven of the 8 cards are keepers for me, only Lofton needs a home. Again, I may already have these, but I won't know anytime soon. The weakest portion of my collection is the Player Collections, somewhere around 500 guys that I seem to only update every 2-3 years.  The Maddux, I do know like I said, but this one is a keeper because it is card number 1, which is a future Frankenset that one day when back home I will put together of course unless I already have 1 in there too. It is hard being away from my cards as a whole.


Let's look at the highlights of the set, no not the base cards if you will which is loaded with veteran stars. No, Topps did things right back in the day. 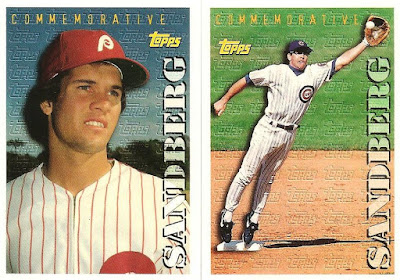 Here we have a pair of commemorative Ryne Sandberg cards. I tend to ignore the Phillies card (Just 1 MLB season) as Rhino will always be thought of as a Cub. Numbered as 130 and 131 with 132 being the checklist. 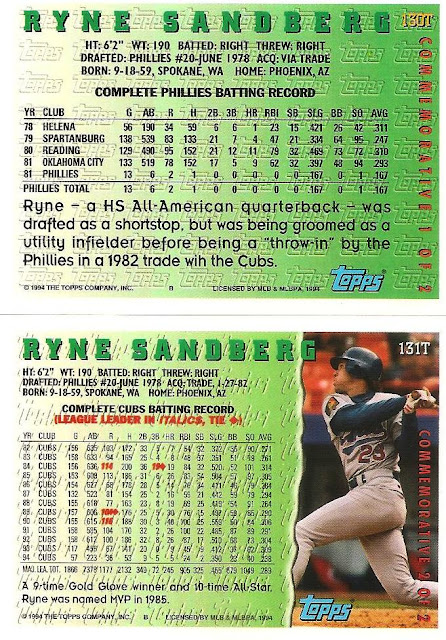 It is a nice tribute, and if I do have the set already these can go into his PC. Should luck have them already there too (which I doubt) then I still need them for the "future Franken sets" waiting back home. 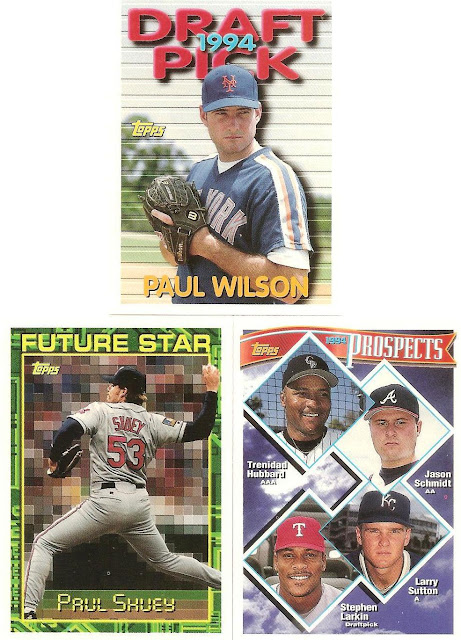 Topps didn't blast you with hundreds even thousands of future stars or prospects, players that will probably NEVER make the BIGS like they often do today.  No they kept it simple....  1 future star card Paul Shuey who just so happens to be a Birthday Binder guy, so if I do have the set already I know where this one goes.  1 prospects card which just so happens to sport the Braves Jason Schimdt who had the best career of these 4 guys. Of course I recognize the last names of two of them as a Larkin and a Sutton. Instead put together a Draft Pick subset back then and in 1994 it had just 19 cards. The rest showed players with new teams, superstars, and a couple of actual traded subset cards.

The first card of the set (#1) is the Paul Wilson card above. 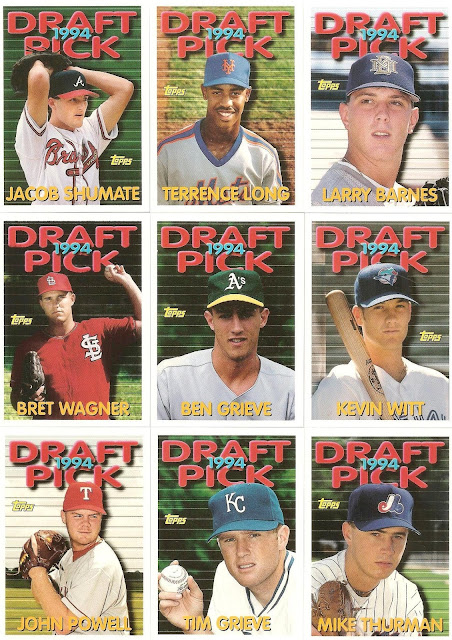 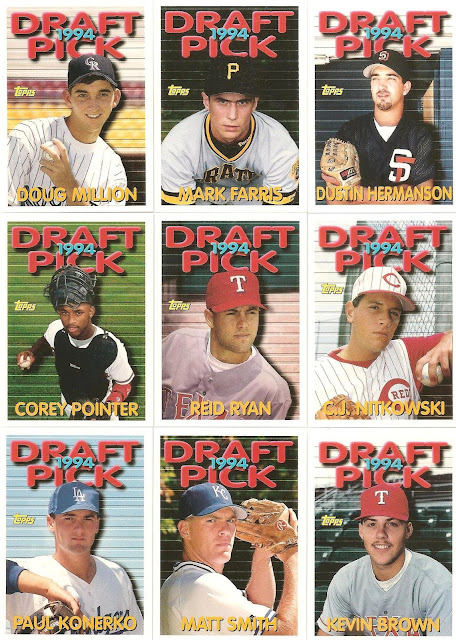 So there are the highlights of the subset. Konerko, Ben Grieve, and Long had the "best" careers from the 19 players. I did like the fact I had 2 Braves in Pointer and Shumate. Recently, I noticed buying or looking at these cards individually had the Reid Ryan card as the key...(This is not my opinion). No, No way would I price Reid over Konerko in today's world.

Back to my main point.

This is the way a Traded/Update set should be and I didn't even have to show the traded players.
Simple, SHORT, and all around sweet!


Posted by Johnnys Trading Spot at 9:53 AM