A couple of weeks back I was browsing Craigslist for baseball cards locally. There were a lot. Two ads stood out and I replied, and have completed the first of the two deals. The ad specified $10.00 for 100 cards, and showed one photo of about 30ish cards spread out. The lady (her name is Sue) lives about 40 miles from me, and I had asked if she ever comes to Ocala, she replied yes and she would be here the following Thursday (which just passed). I explained that I would like to look at them if she didn't mind, she said no problem. Funny thing is she had a Dr's appointment 2 buildings down from one of my moms Dr's which I needed to pick up something from that very same day and turns out time too. How awesome is that all by itself? We met, I perused the cards while we talked baseball, yep a good 20 minute conversation, enjoyed it. Sue had the cards in two 50 count snap boxes. I looked through the first box and knew I would be glad to give the lady her $10.00, afterall thats a dime a piece. I did look at the other box too as we talked, but had already told her I wanted them after the first box.

The photo in the ad showed some of these 1990 Post cards, nearly all of them showing. that is what sparked my interest to begin with along with the Nolan Ryan and Cal Ripken Ultra cards. 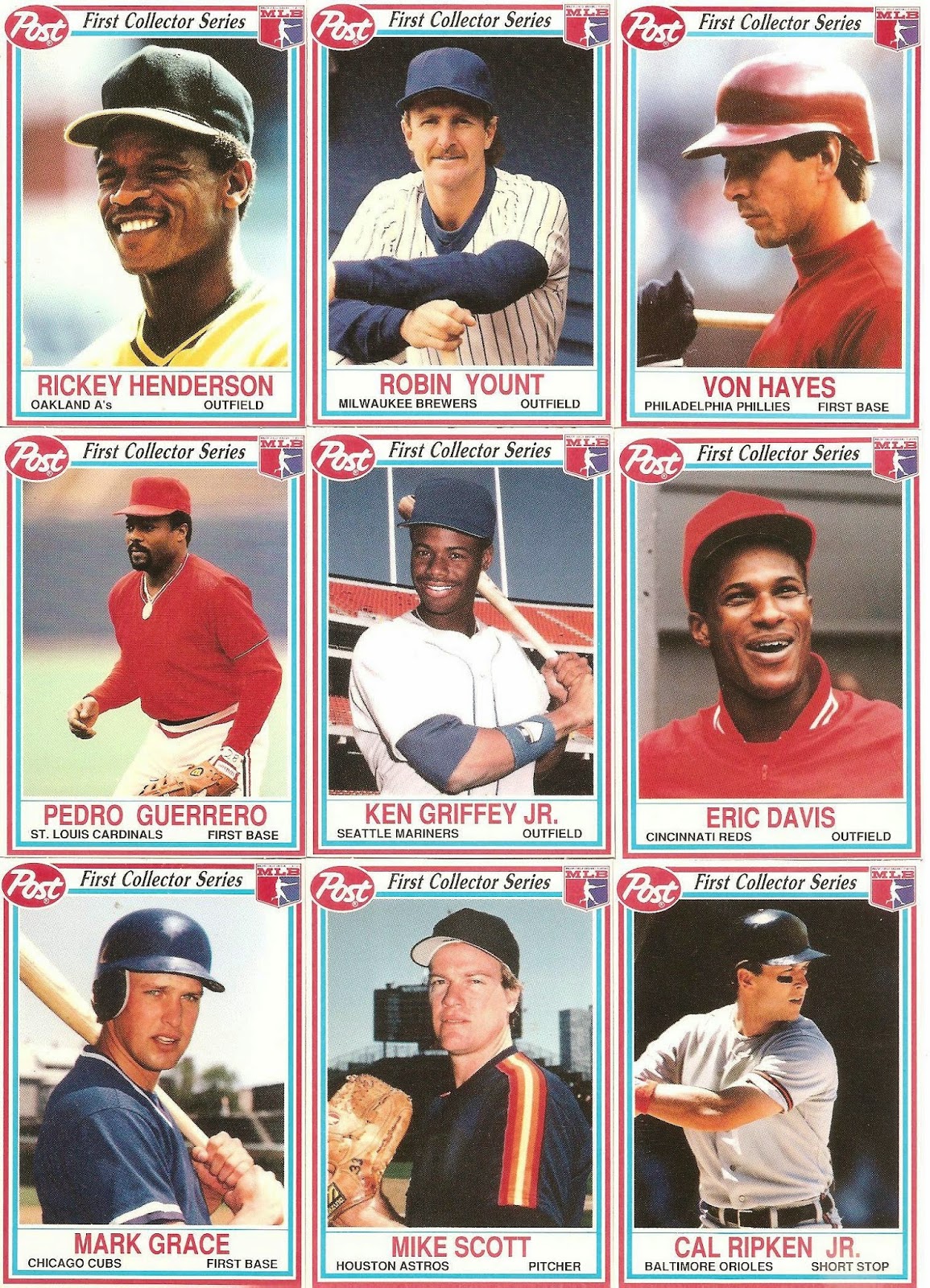 These were in the photo. Jr is what initially caught my eye, but this group has 4 HOFers one of which hits my birthday binder too (Yount). the other three HOFers will find a new home in those players collections. I contemplated not busting up this oddball set, but........I just had too, and yes all 30 cards were there! 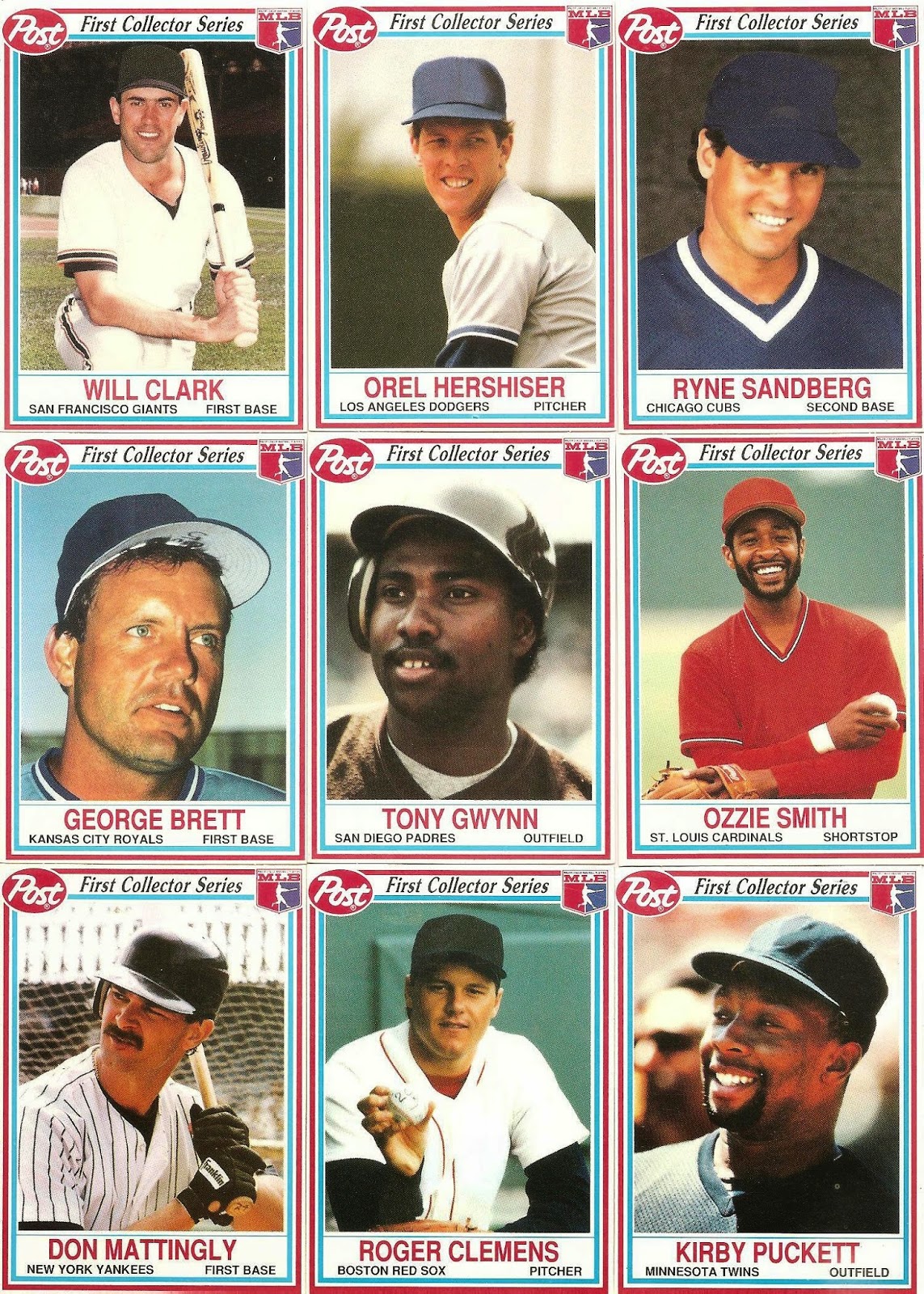 7 maybe 8 HOFers here too, and another of which hits my birthday Binder (Hershiser). Not bad for less than a dime a piece. There were actually 106 cards in all. I am only scanning 9 of the last 52 cards just so you can see what the 2nd box contained. 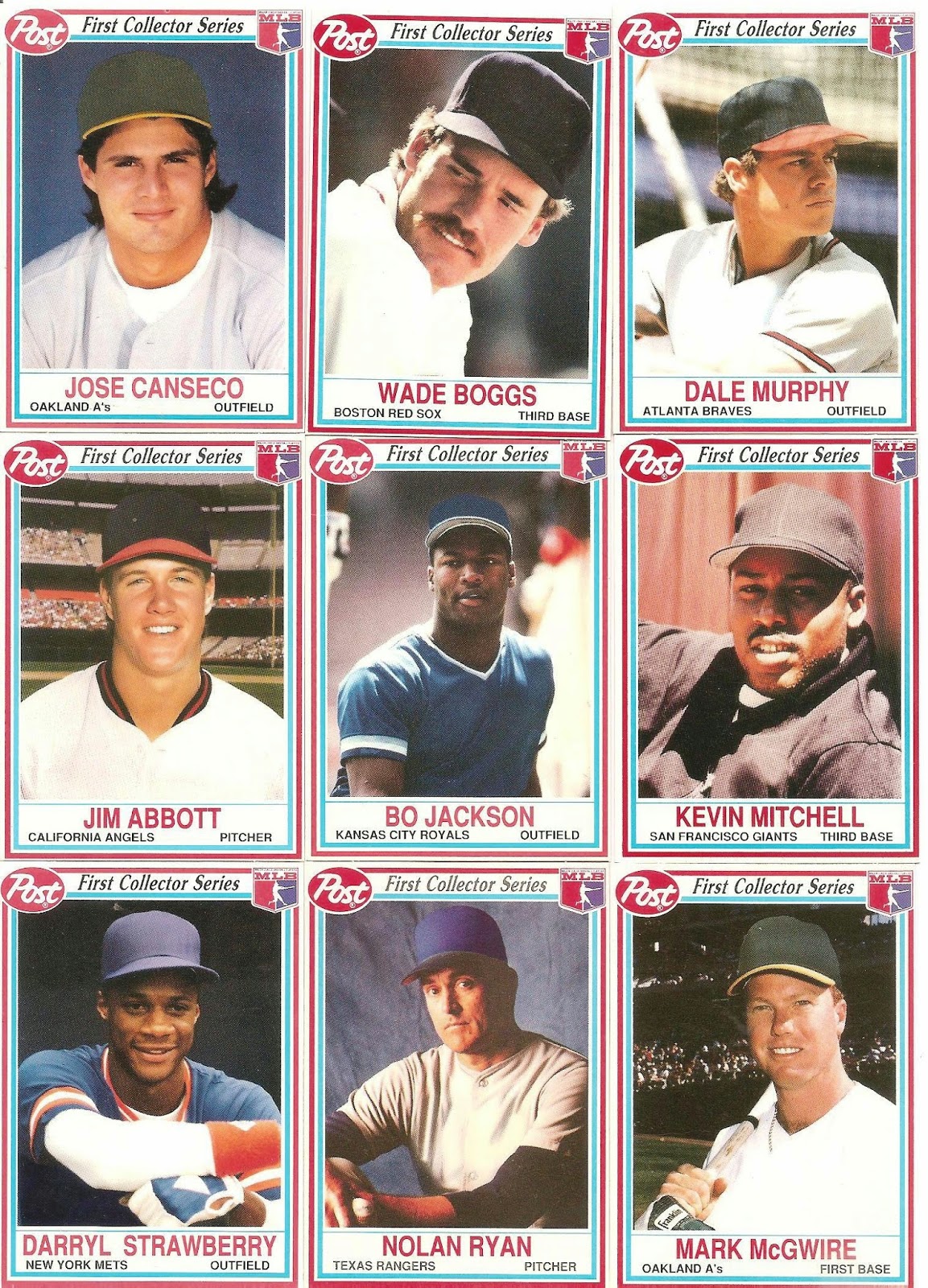 Another totally sweet page, including the Murphy (which I did already have), but go figure I have a player collection of him too.

Below you see the Ryan and Ripken cards mentioned earlier. There were dupes of those, 2 Ryans and 5 Ripkens! 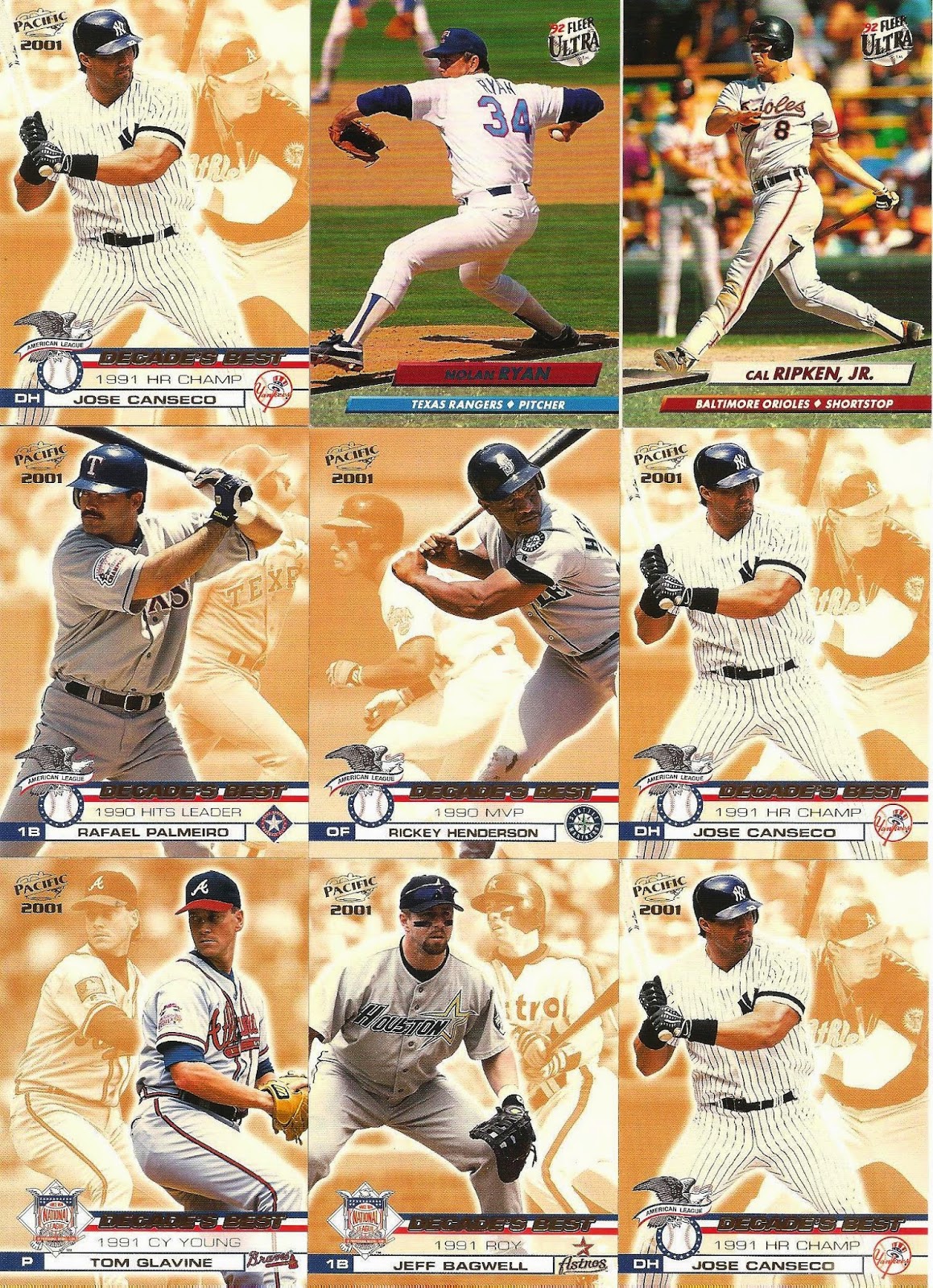 I like these Pacific inserts, pretty cool, especially that Glavine which I needed. The Canseco had trips. 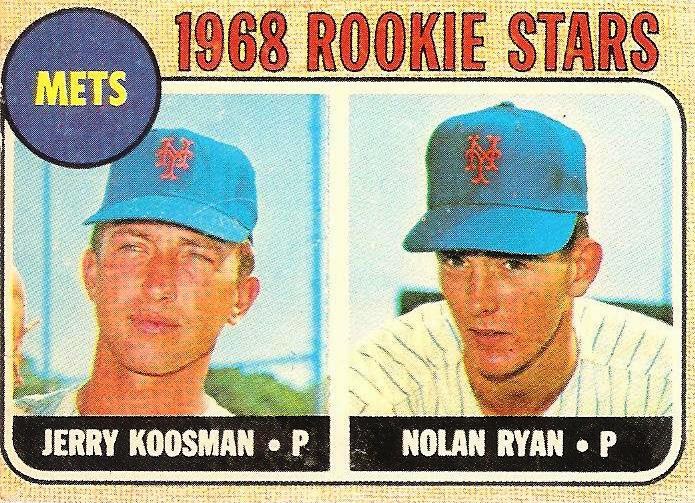 WAIT, ah shucks, its a reprint, LOL. I didn't know this one existed before. It is actually high gloss too. 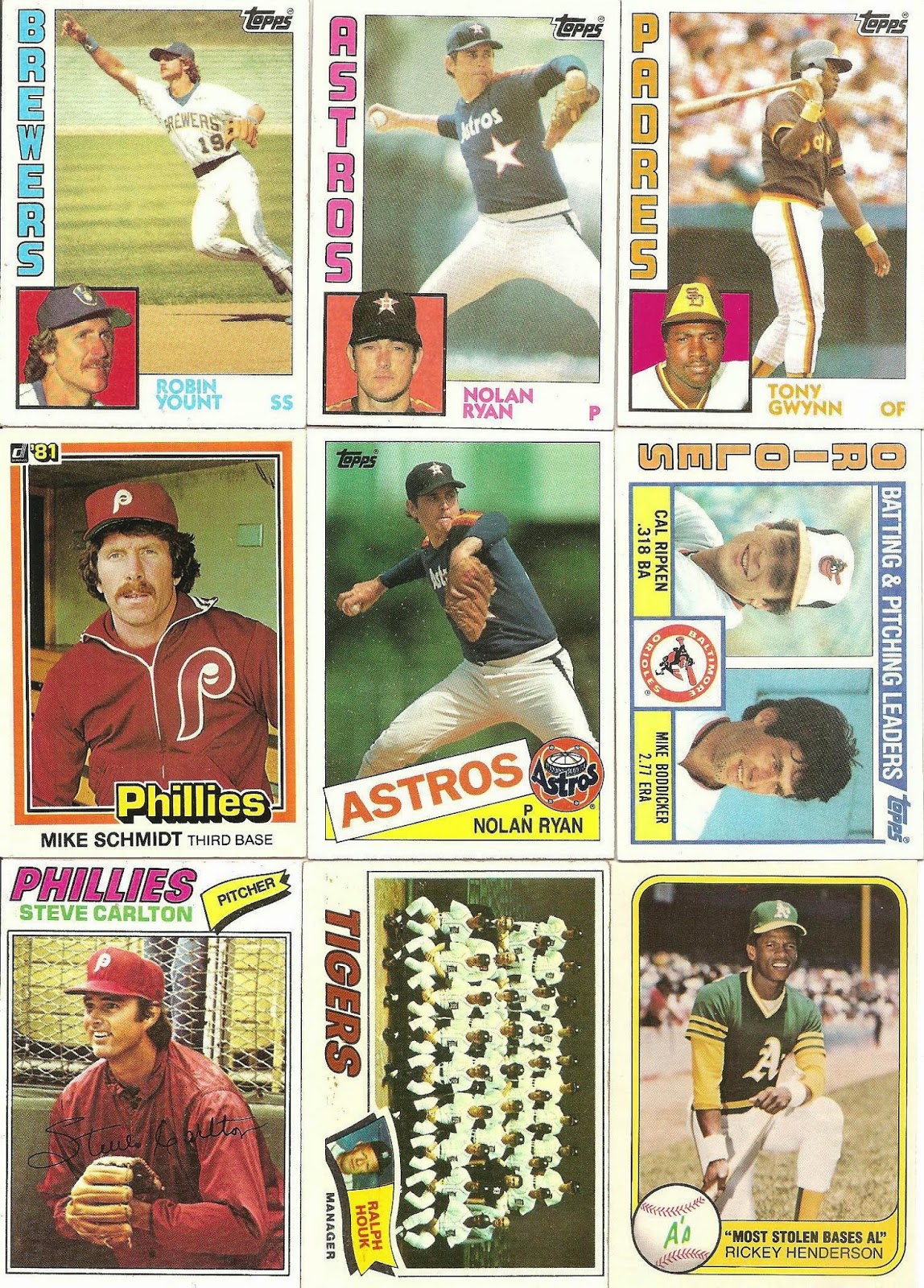 The cards above wrap up the first box. anotehr Yount, a coupkle more 80s Ryans, 81 Schmidt, 84 Ripken, A Carlton, Gwynn, and Rickey too.  yeah Those 49 cards. There were also three Fidrych cards that I didnt scan. 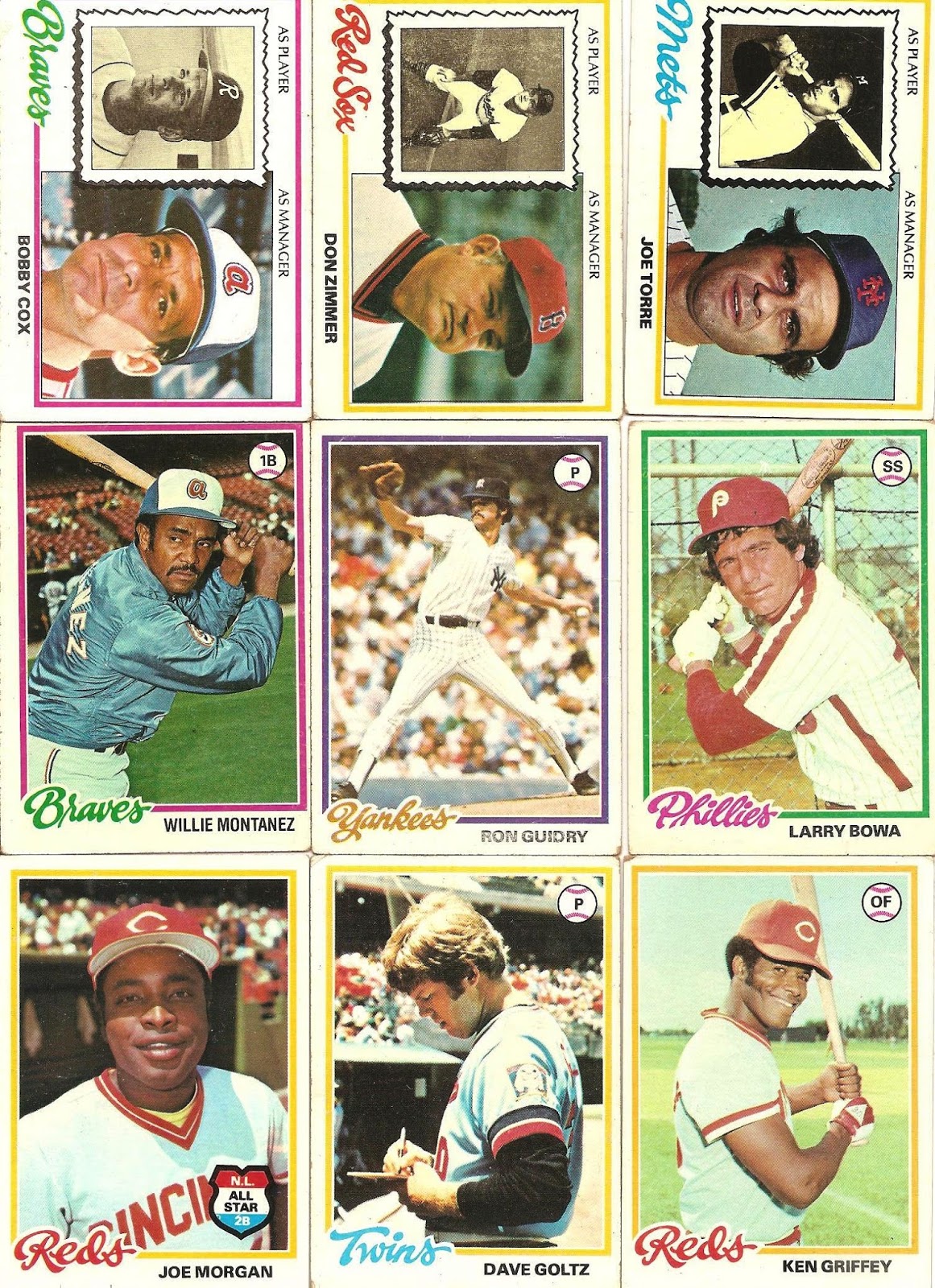 Goltz makes the top nine because he is signing (I think). The Morgan card is in Excellent condition the rest were VG but one which was creased. 70's cards for less than a dime, okay maybe I could of done better, but I won't complain. I am happy with the ten bucks! Not to mention Sue basically delivered them, that was really cool.

Now, I am hoping to get to the second Craigslist deal soon. However, that Lady was moving and now 22 Banana boxes full of cards are in storage amongst a lot of other things. That ad said they wanted $2K, but that was including some very nice high end memorabilia, which I'm not so interested. Just the cards, which ranges from junk wax to 2000s. Some collated, some sets, factory sets, wax boxes, etc... Fingers crossed we can work something out, and soon.  22 huge boxes..........
Posted by Johnnys Trading Spot at 12:38 AM