With last week not generating any cards in the ole mailbox, I had an itch. Saturday, I went to the Wal-Mart 2.5 miles from my house, and noticed two very nice "marked down 40%" blasters. One 2012 A & G for $14.98, and the other a 2013 Archives blaster for $11.98. I didn't scratch the itch though, I placed them right back where I found them, hidden on the top row behind all of the other blaster boxes. Well, I wish that I had pulled the trigger Saturday, as today only the Archives box was there (of course there are still 6 blasters of Heritage on the shelf too (there were 8 on Saturday). I pulled the trigger on the 2013 Archives today, and I am glad I did. 8 packs, 8 cards each = 64 cards (or so due to less cards in insert packs, but we'll see. 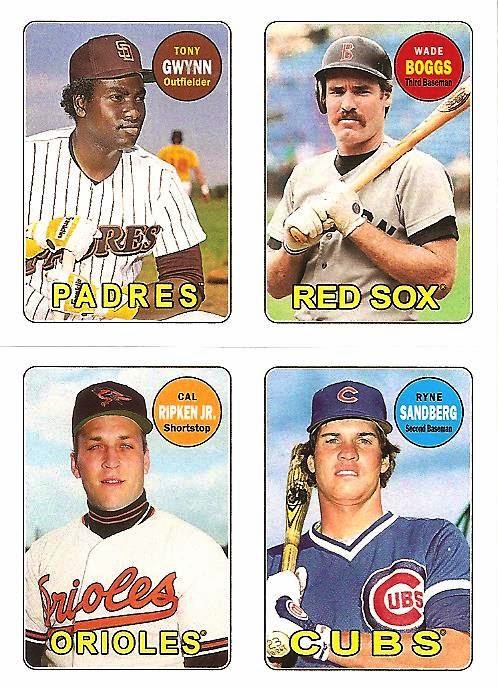 The 1969 quad mini sticker insert (nice group of BBers). These are inserted 1:8, being that there 8 packs in the box, I felt the odds were good. Now it will be hard to figure out who to trade this too, as let's see Gwynn and Padres collectors, Red Sox and Boggs collectors, Ripken, O's, and Turtleneck collectors, and Cubs and Ryno collectors. Tough I tell ya.

There was a HIT too, so let's go ahead and get that out of the way. 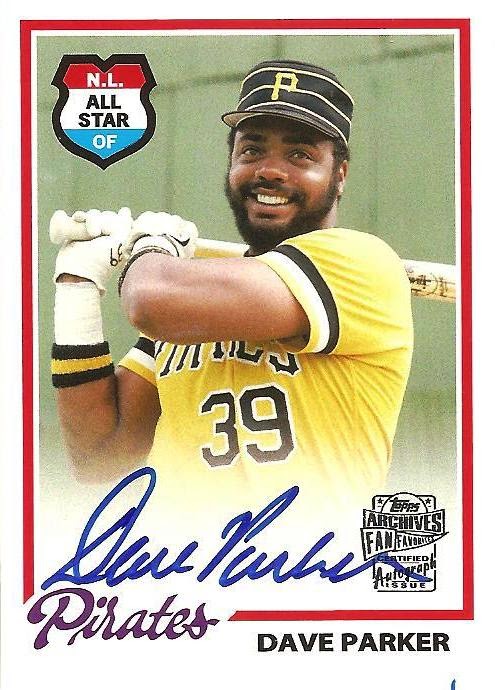 A Dave Parker FanFest Autograph in blue sharpie. you can even see where Dave marked the bottom of the card, although I am sure he didn't mean too. Love the on card autos. These are 1:62, great yippee.
Now lets see the other inserts:

A couple of Tall Boys (1:5, so getting two was a bonus) and lets see yeah I think these two guys are pretty decent BBers.

You would think that I was done with anything else, right? I will let you decide with the base card pulls.
first up, my Braves (BTW, the top card in the very first pack I opened was Freeman, how cool is that?)

I have all three of these already. 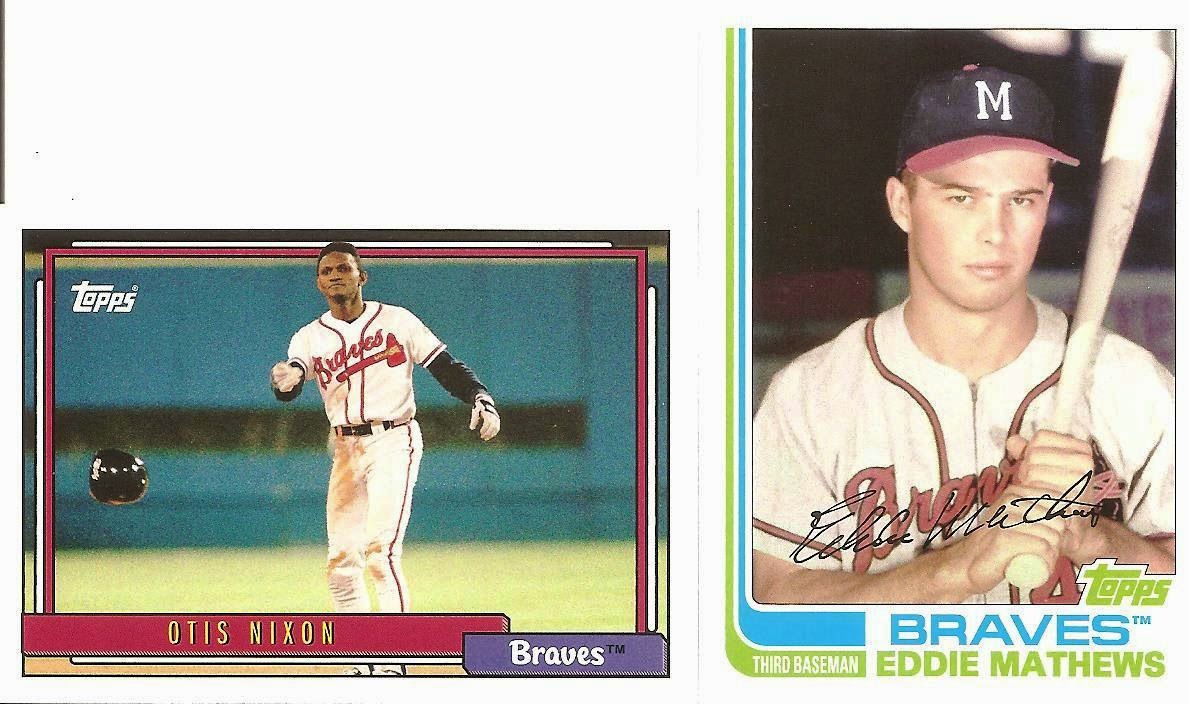 I already had a couple of the Mathews, but I did NOT have that Nixon. Now, interesting about the Nixon card is that it is the only one of the entire box that say on the back 'Reprint card back", so I am thinking that this is actually an insert, but it is not listed (1992) on the pack. If you know something let me know. 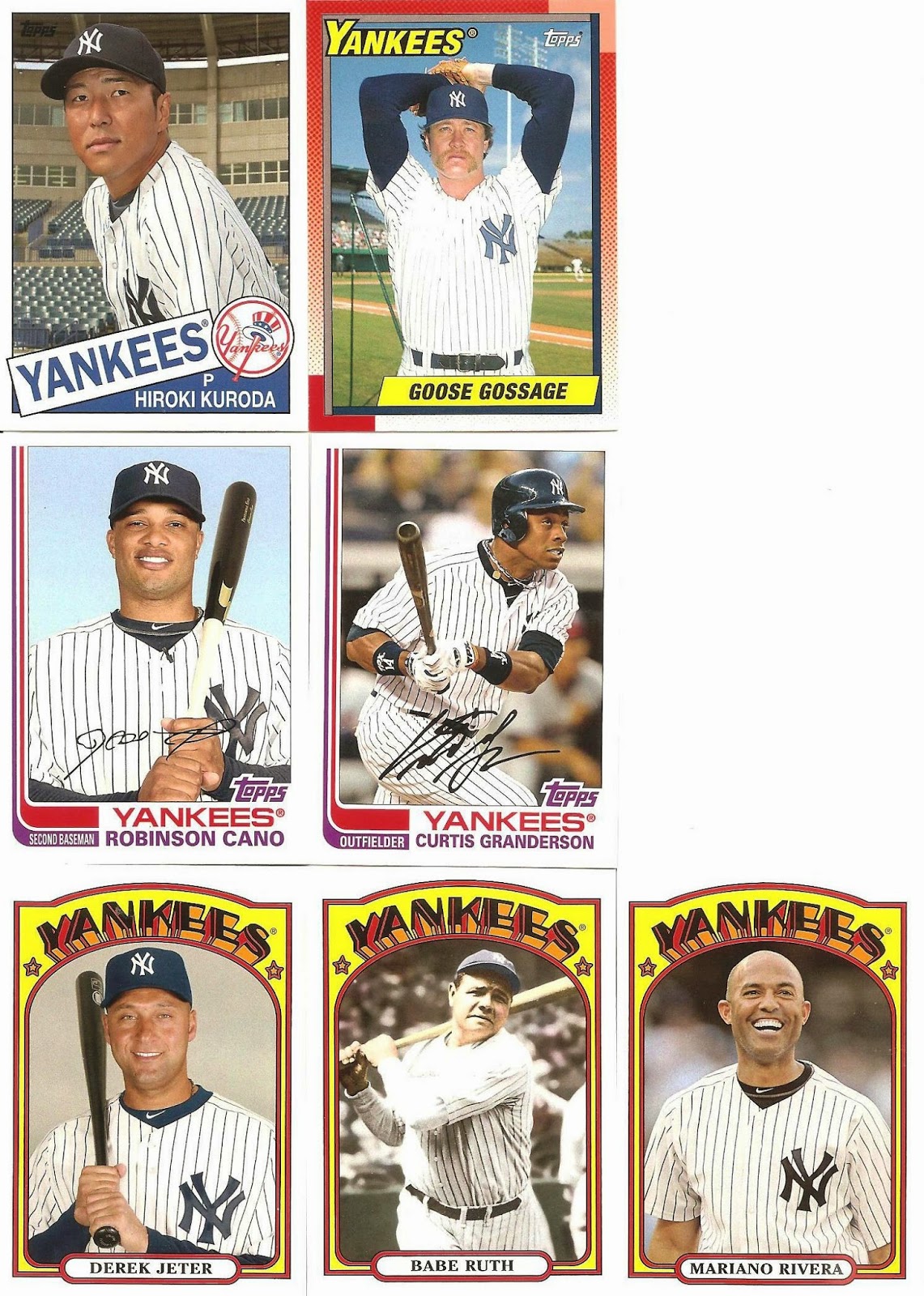 Hmmm. Jeter, (I need Jeters to trade my Dealer friend), the BABE!, Rivera, Cano, Granderson, and Goose, not bad for Yankees (JK) I am a Braves fan you know. The Kuroda will go with the stack of Japanese players I scanned for trade the other day. I know, I put the A's card where the Reggie Jackson should have been, oops, my bad. Kershaw and Hanley. 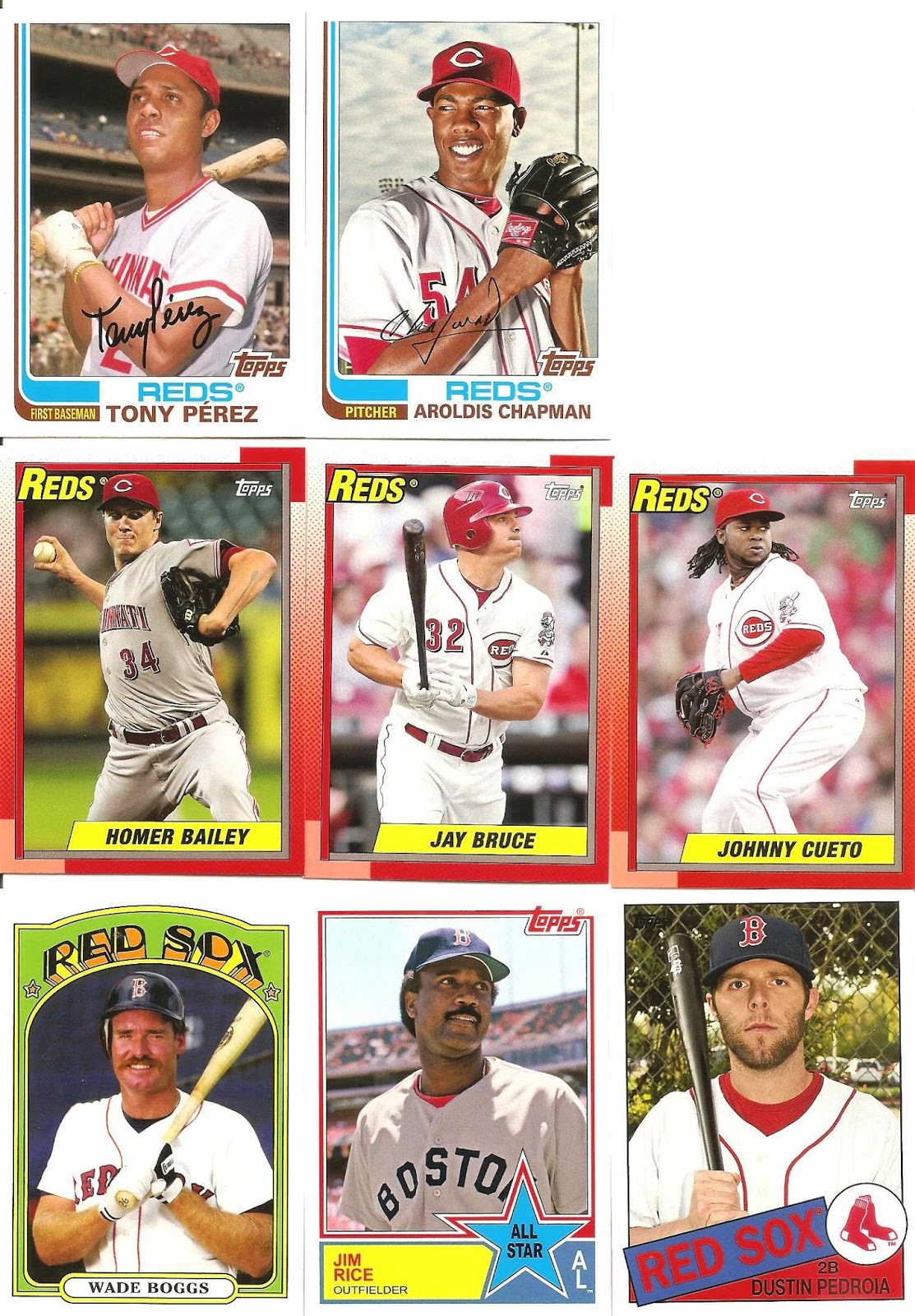 Pedroia, Rice, and Boggs. (We know whose stack those are going in). And a Tony Perez.

There may be a Ranger or two that can play some baseball above, LOL! 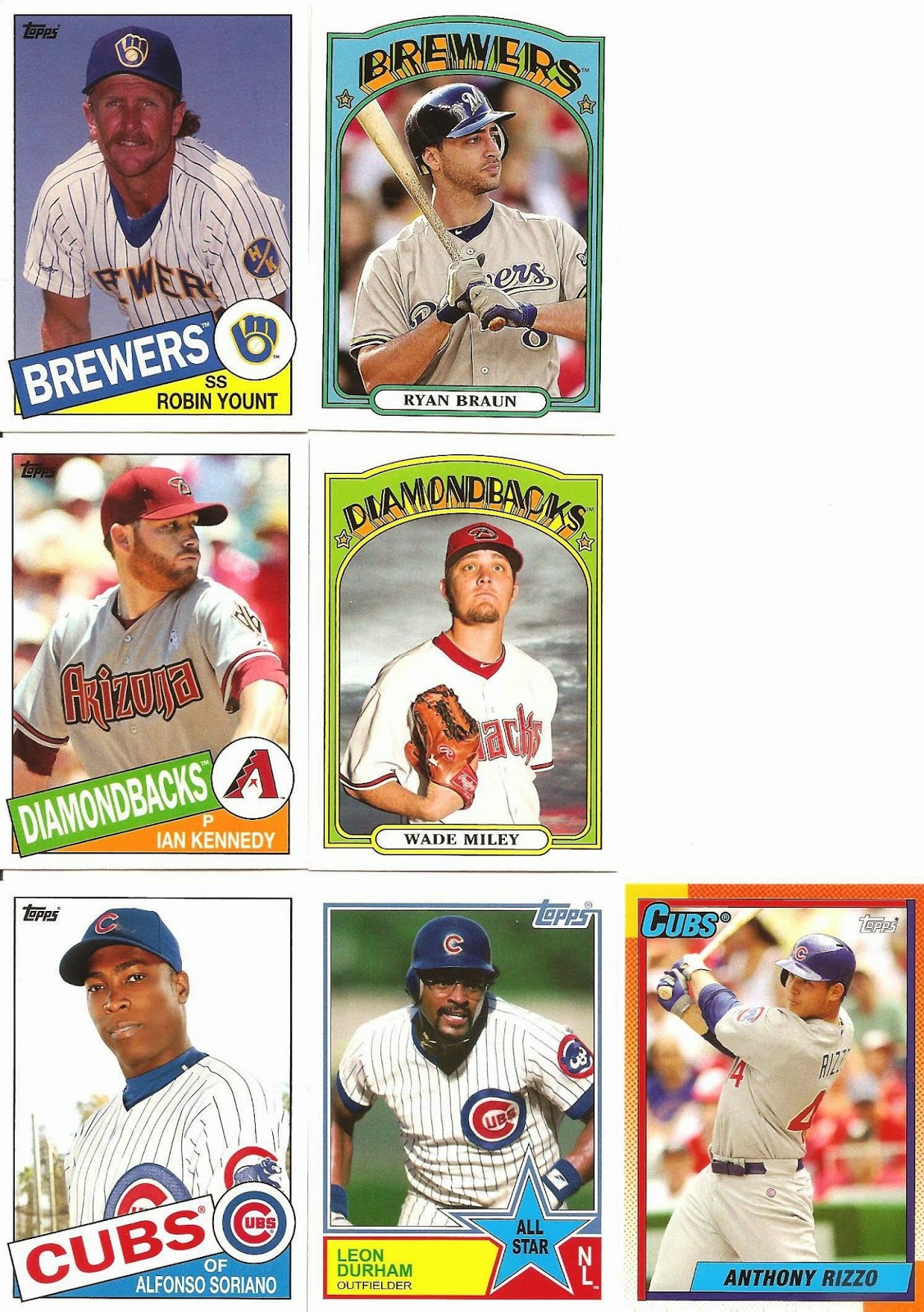 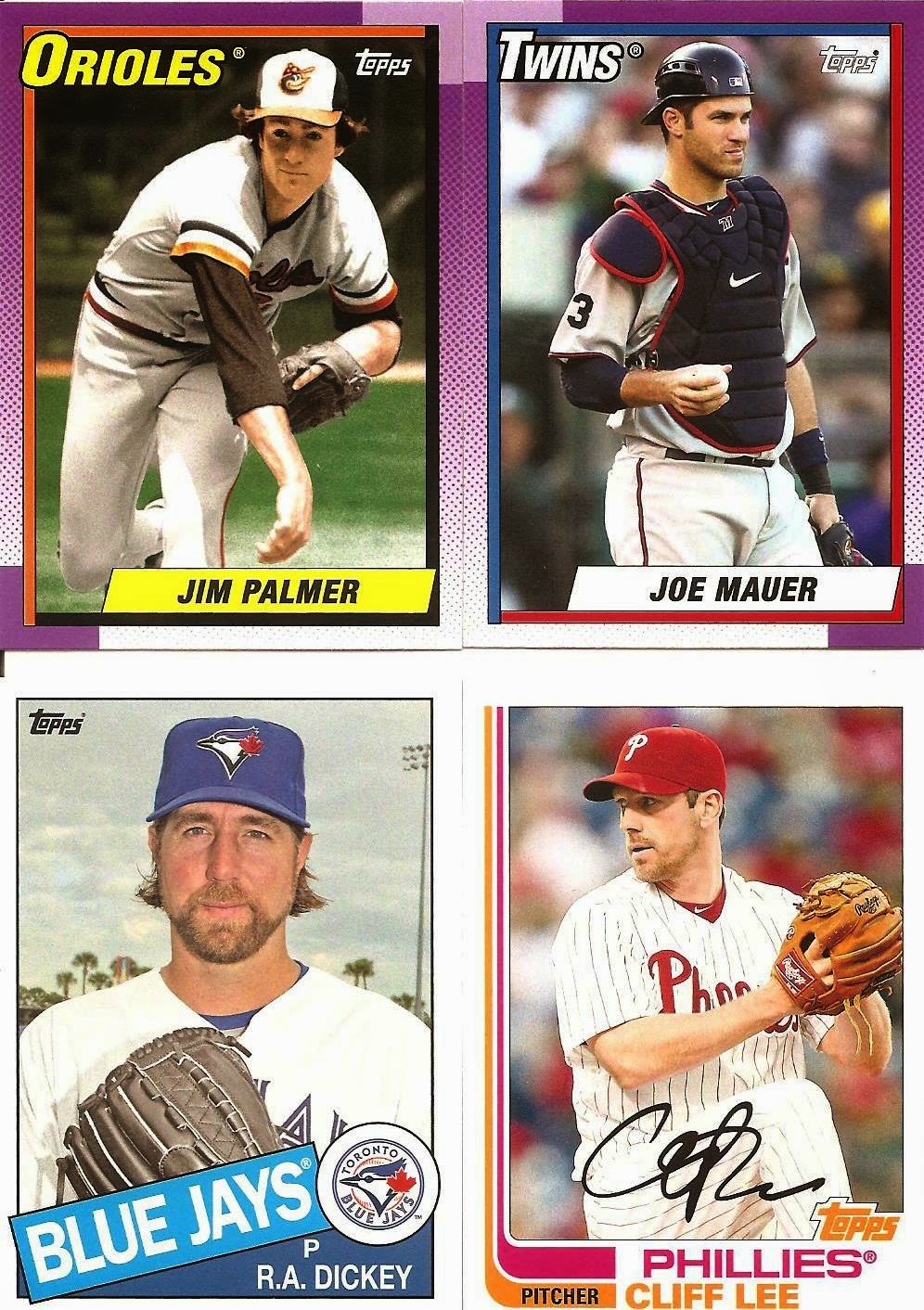 And a Jim Palmer.

Total actual pulls 59 cards, but if you take the stickers into account that would be 62. Not a bad blaster for $11.98. I pulled some really great cards for sure even though only 2 are going into permanent collections of mine, and another 1 or two in a "not so permanent" collection of mine like the Parker auto but hey I would trade it for a Braves auto.