Like I have mentioned over the previous two posts, this post also highlights cards that I picked up Saturday at the card show in Jacksonville from my friend Fred.

We all know about the Wacky Packages stickers and such, but did you know Topps produced a set of Wacky Plaks back in 1959 (88 cards/plaks). Those same plaks were also re-issued in 1965, but with different numbering and were called Kookie Plaks. The 65'  re-issue set also was preceded by a test sticker set of the first 44. I would love to get a hold of a set of those, super rare. BTW, the 65' set above is also rarer than the 59's. WhileI am at the Topps Wacky history, there are also a 1969 set called Wacky Ads.

Well, I grabbed up some of the original 1959 plaks. 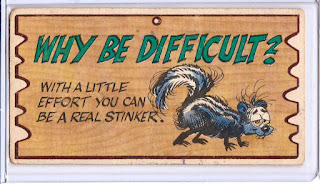 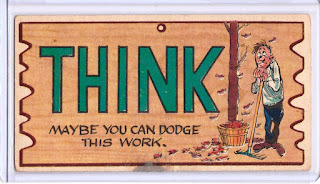 These are not standard card/sticker size. More like the old basketball tall boys. 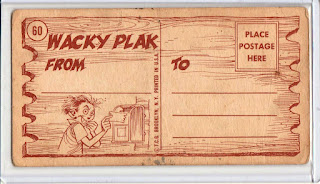 A view from the back. Next week will be another sticker day of just a few needs that I picked up from a different seller.