I hadn't, that is until I did. What am I talking about you ask? We've all been busting down the door over at Sportlots over the last year and half and longer. What I haven't done over there is bid on one of their auctions. They're different, but I bid on my first one, and I won.......YEP.

I bid on a lot of 2008 Upper Deck cards. This is a set I am building, and needed a lot of the cards.

I seen the shipping and adjusted my bid. I put a max bid of $5.00 and waited.

You have to wait to win. They prevent sniping, and in order to win an auction it must go 3 days without an outbid on you. As you can see above I won the auction for a quarter. (.25), Wow.

Then to top it off, the guy priority shipped them, and two days later I had them in my binder. I wound up needing 159 of the cards for my set build. Pulled another 40ish for my PC binders and about 25 for another collection. So pretty good deal for me. I am certain the guy paid more than he got from me than the shipping actually cost. Unlike yesterday's post this one Praises the heck out of the seller (Mike7830).

I do have some eye brow raising questions though. 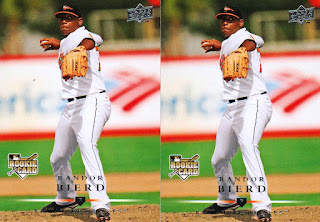 Do you see any difference in the cards above? 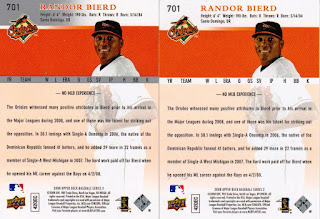 I didn't wither, until I was sorting them and noticed that several cards had no gray (look at the number area as well as the stat bar/line. I did my research and found a forum on TCDB from a year or so ago. ONLY cards numbered 701-799 have this variance, but nobody count it as a variant or parallel. 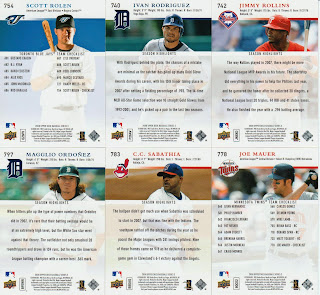 Here are a few more grayless backs that made it into my PC's.  Some say they believe it was just a boo boo in the printing, and some do not because they pulled both the base with the gray and without from the same fat pack boxes. Who knows, but they are different and i did get one of the three high numbered Braves, so just two more to find.