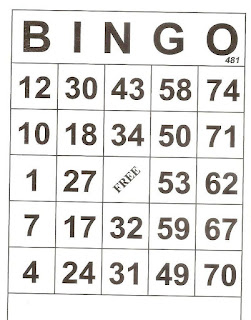 BINGO.  Yes, Bingo. My idea is to have 10 of us play together. It will take a little time to get the cards out to the players. There will be a total of 5 games played on each card. 3 of them will be simultaneously, then another game, and the last one ends it. I am planning on doing this 1 time per month (at least for a couple of months to see what bloggers think). I am thinking of doing the first one in June or July.

The first three games played will be simple games. 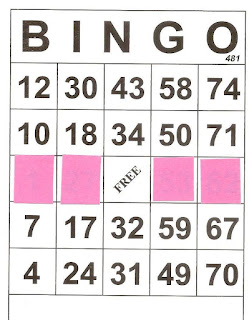 Straight Bingo. 5 in a row horizontal, diagonal, or vertical.  Simple....right? 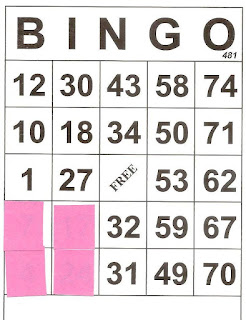 This one is called the postage stamp. Good on any corner.  Simple....right? 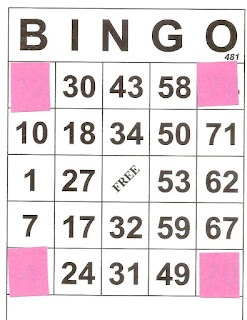 This one is called 4 corners. You can't get any simpler than that.

The 4th game will be 2 (two) straight Bingos on the card. Double Bingo. Still simple....right?

The last game is BLACKOUT. Cover every number on the card.


My test shows that this entire "night of games" will last 1 hour.  Total probably less. I will show the numbers I draw on one post. Notify me in the comments if you have a Bingo.


Now for the good stuff. THERE WILL BE PRIZES..... NICE PRIZES ESPECIALLY for the Blackout game. The other 4 will be still be great grabs.


How does one get a card. First, you're going to have to send two BRAVES cards that I need. Not a hard task at all. (send many if you like, I'm not picky in that regards). My Braves lists are broken down into the following categories:

Secondly, After I have received the Braves cards. I will e-mail you your card. There are no duplicate cards.  You can print them out if you like (or just draw it out- saves ink and postage). No sense in mailing them. I will write your name on your card here. I will be marking the cards on my end, but by no means will I be calling any of your Bingo's. You must do that.


I am going to ask that all participants be in the US. (postal reasons).  Going to call this Bingo Night. (duh). It is simple I know, it won't be boring and unlike the mini Big Fun Games you will NOT know what your prize is until you receive it.  I believe this will be fun.  Just something different in our blogging world during this new era we are all in. I do hope you all like vintage cards of super stars and Hall of Famers, not that that is a clue in any way shape or form.

I will pick a 1 hour time frame that respects both coasts. So probably a 10-11pm window maybe 9-10pm. PLMK your preference as some of you will probably be back to work come June or July. Maybe if you have children you can get them involved and something you do together.

I think I covered everything, but if not I will post that in an update.