Okay, I got back the other day, made a quick post last night (late). Before heading south for a few days, I had several posts rather scan files ready to post about. Now, to get you guys a heads up, I brought back apx. 8K cards from the card show I went to Saturday. I won't be showing most of them as they are our everyday set builds variety with say the exception of a thousand, which I will be breaking up into the 3 or 4 categories. That is how many vendors I bought from. I won't be able to show even the highlighted ones that I plan on showing for each vendor in a single post. There will be several posts each for three of the vendors.

Now to get caught up on those files I had ready to go for a couple of weeks. 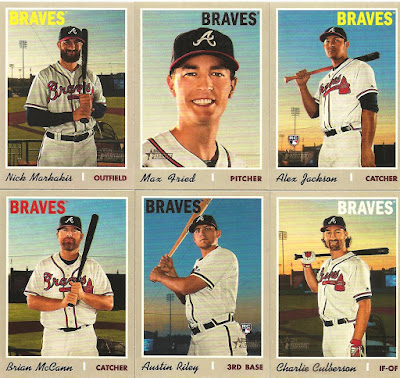 My 2019 Heritage High numbers. I had also grabbed the Freeman from the base set on my last ComC shipment. So now, I only need the Acuna #500 and the variations. 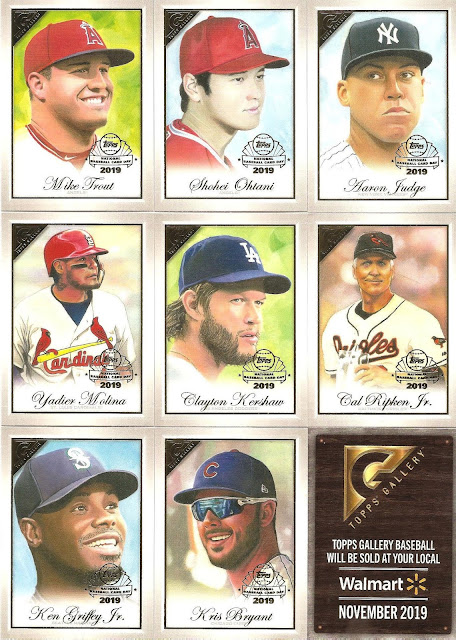 National baseball card Day Gallery Preview cards. These came in 2 hanger packs I bought which is another backlogged post. 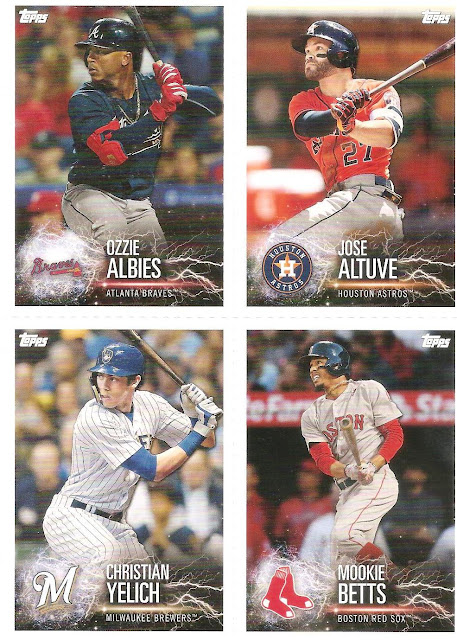 I still need a couple more Braves stickers from this years set. I picked up several boxes from Walmart when they came out. They came with an instant $1.50 off the box. You just had to rip the plastic to get at it, which I of course did.  Now, the 4 card panel of stickers you see above came from the sticker album itself. Yes, there are cards inside the album. Now, the album is cheap at a $1.99, but when you get a blaster from Target the coupon is for a FREE album. So I grabbed 4 blasters and got 4 free sets of this panel. Which is good, because I needed the Albies sticker #143. I assume (which is scary) that there is still an un-perforated sticker too, in which I will want that one too. Now, I have an intact panel with Albies/Braves and the perforated single, as well as the singles for the other three guys all PC members. leaving me with 2 more intact panels for two of the other guys binders. Target only had the 4 boxes ( I needed 5).


Upcoming posts: Some Hanger pack purchases, some (lots) of relics from earlier in the year Jacksonville card show, which I never posted (that will take several posts by itself), HOF post card post, and a purchase from Larry Fritsch cards (but on Ebay). All of these will be posted in between the two regular themed weekly posts before the newest cards from the recent card show make their debut. Which gives me time to get them sorted, checked, scanned, and put away.

And closing out tonight will be a couple of thank you cards from P-Town Tom of Waiting til Next year. 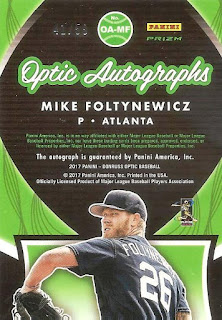 Tom sent these cards thanking me for the last contest I held. Thank you Tom.

Panini did an excellent job with that autograph on the 2017 Optic card. Logos not needed.