I'll start off with my new to me Braves. 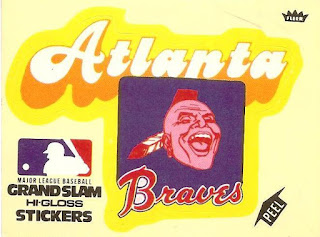 This Vintage Fleer Sticker didn't come from the Villages card show. It did however come from the COMC order that was waiting for me back at my home (in FL) that I got when I was done with the card show. 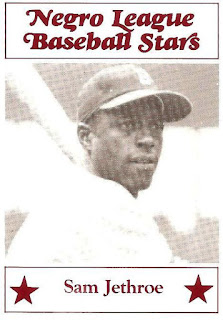 This one obviously came from that set I picked up on Ebay from Fritsch cards. 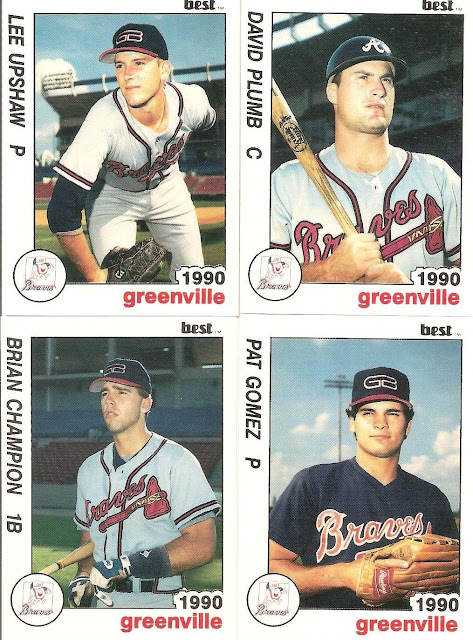 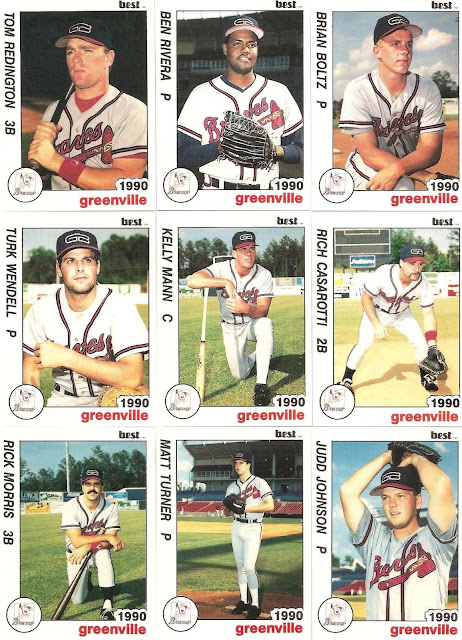 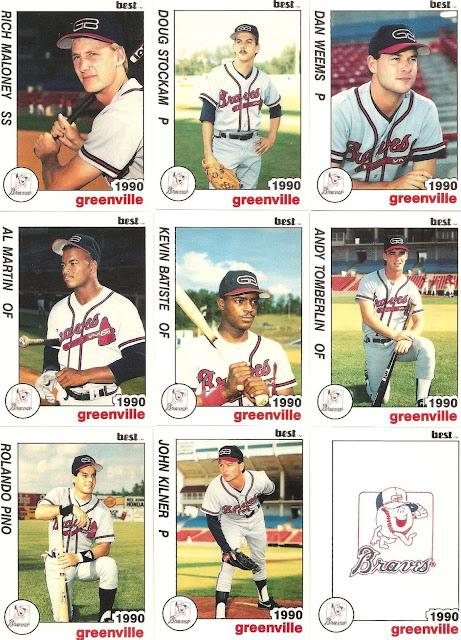 This set came from the Villages show. I picked this set up from the third table I bought from. More from this table....a lot more. 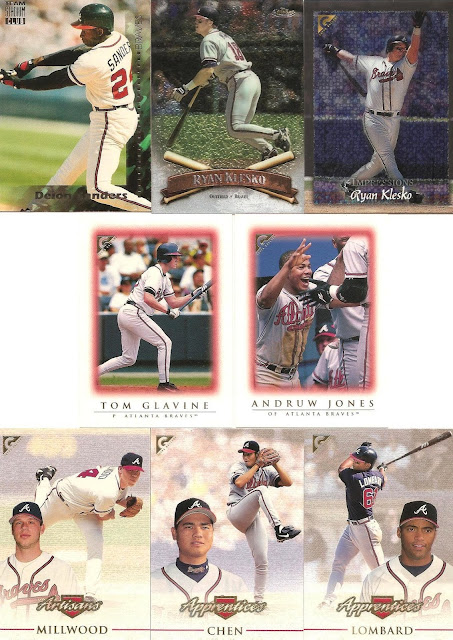 These came from the same vendor. 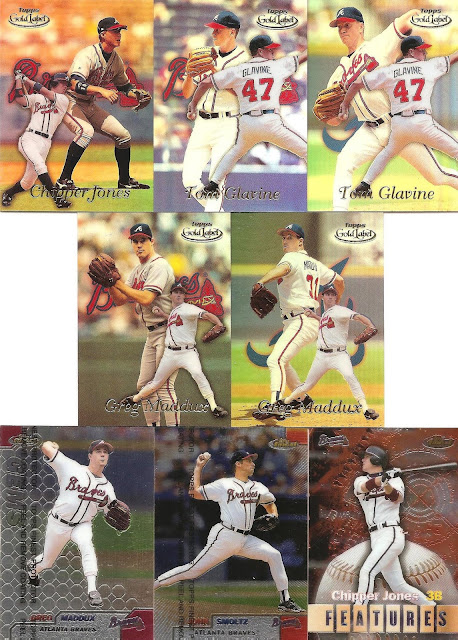 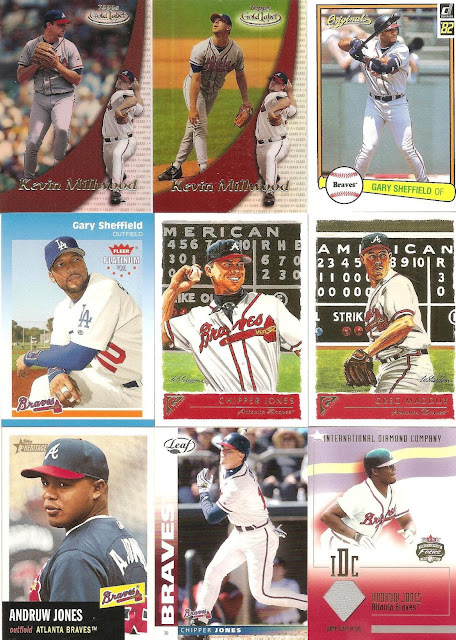 You guessed it, these came from that same table.

Yep, these too. I scanned the back of the McGriff card so you could see it was a sample card. 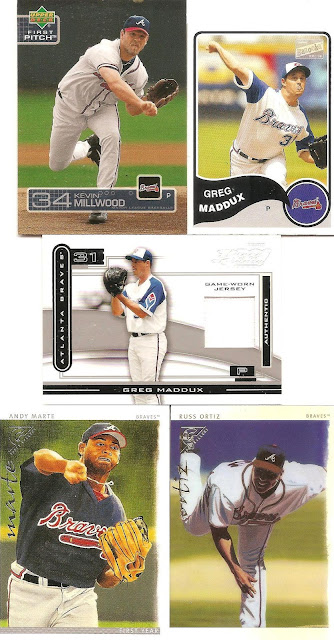 I slipped the Maddux jersey card in the middle.  Plain ole white swatch. I really wish they wouldn't do that. The bottom two Gallery cards came in the ComC order. The Marte is the variation (with necklace). 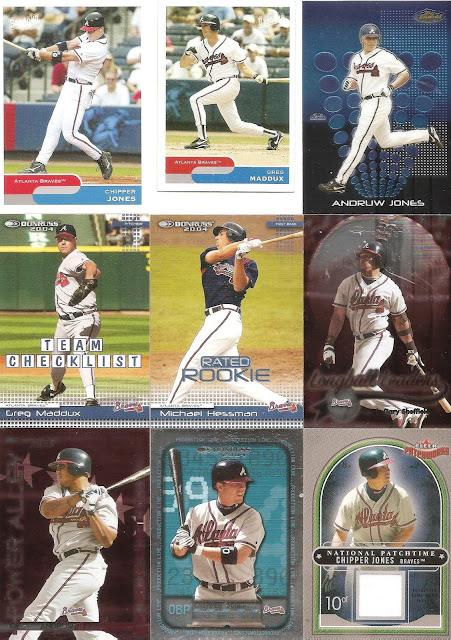 I got near the whole set of 2004 Donruss from that same vendor, well vendors. They were a pair of brothers that just so happen to live a few blocks my my house down there. The Maddux and Hessman were the last two Braves I needed for the team set. 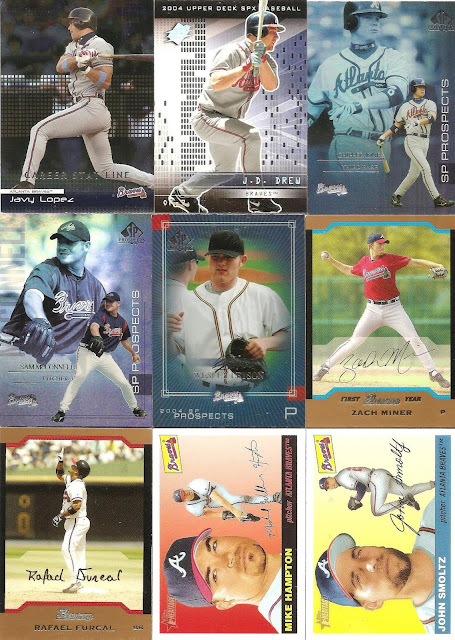 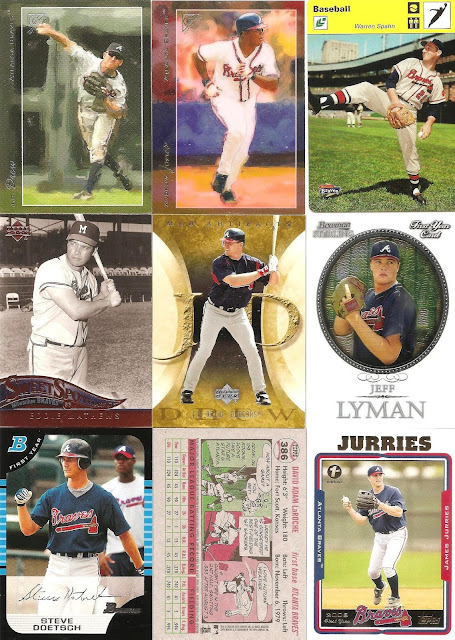 Nite Owl showed off his 2005 Leaf Sportscaster last week. There's mine numbered to /30 ball leaping. It took a few minutes for me to figure out what is was called because like Greg, I went by the copyright which is 2004. Beckett didn't show anything, but I remembered Donruss did that often, so I dropped the year in my search query and viola. The LaRoche is backwards on purpose to show it is a grey back. 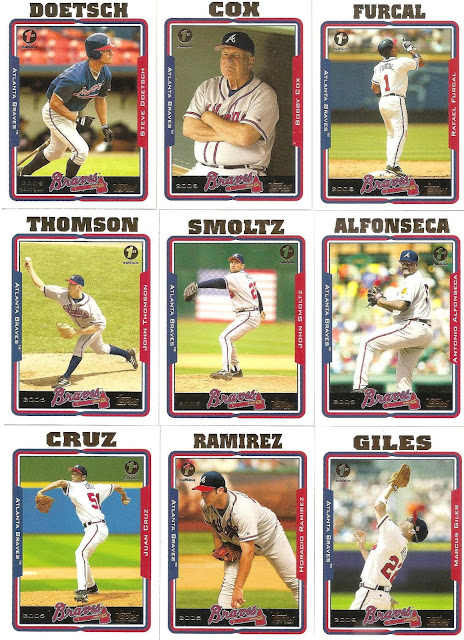 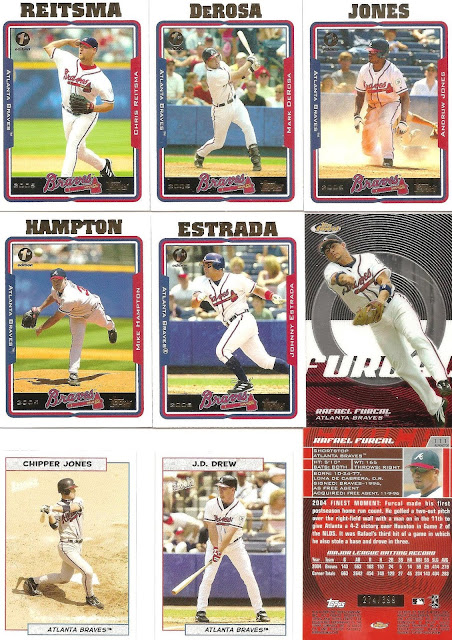 I picked up 3 unopened boxes of the Series 1 First Edition from the 2nd table I bought from. I paid $10.00 per box. 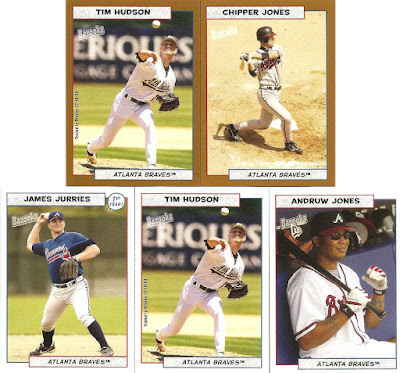 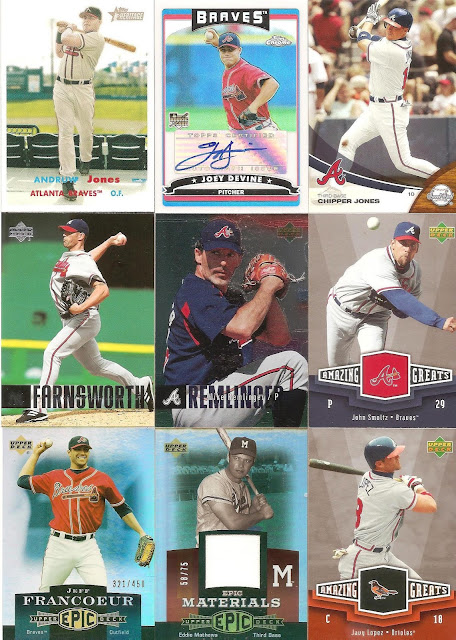 The Andruw card top left is the variation (with seats). I got that one in the ComC order too. 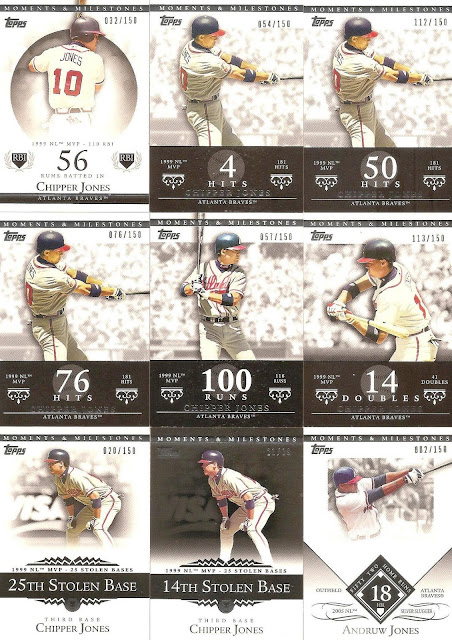 The bottom center Chipper (black) is numbered to/29. But that's wasn't the best card from this set I grabbed from the 3rd purchase. You'll have to wait to seewhat that was as it was NOT a Braves card. 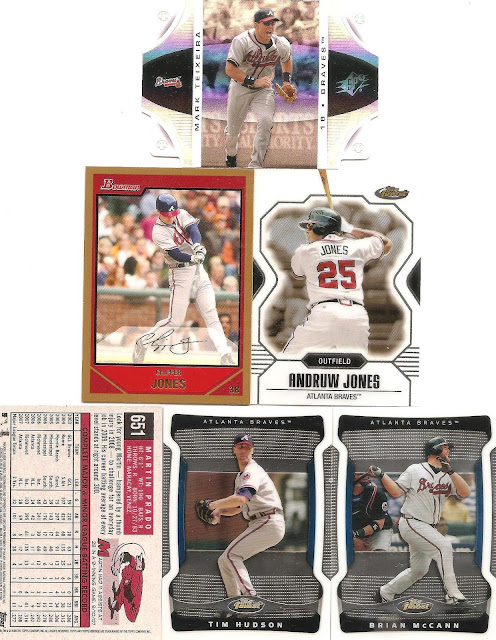 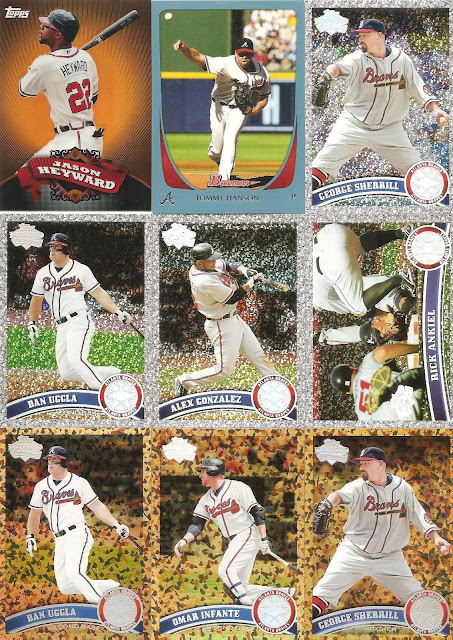 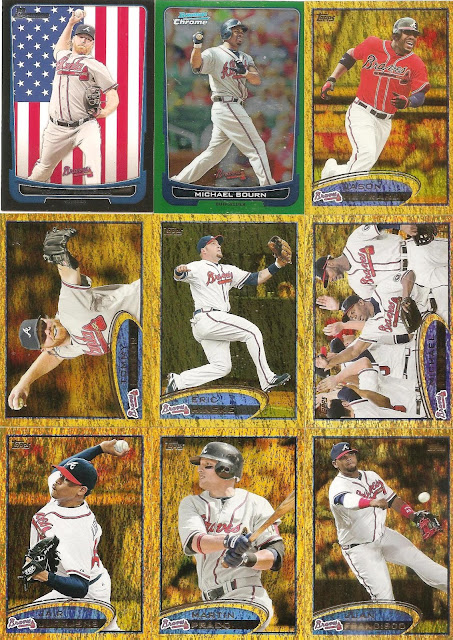 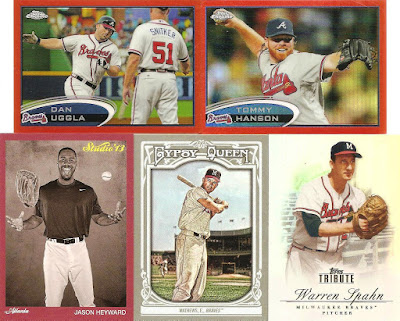 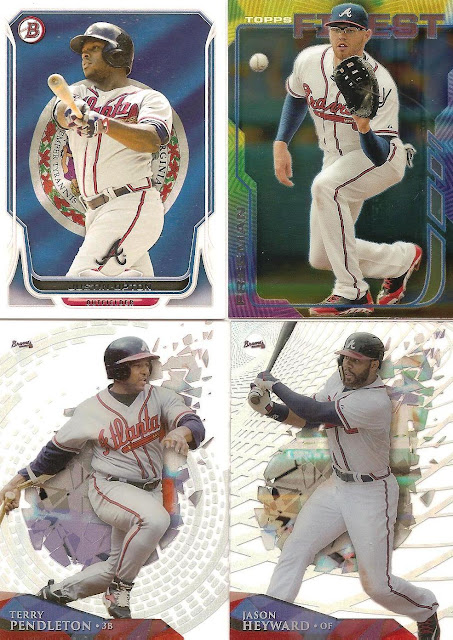 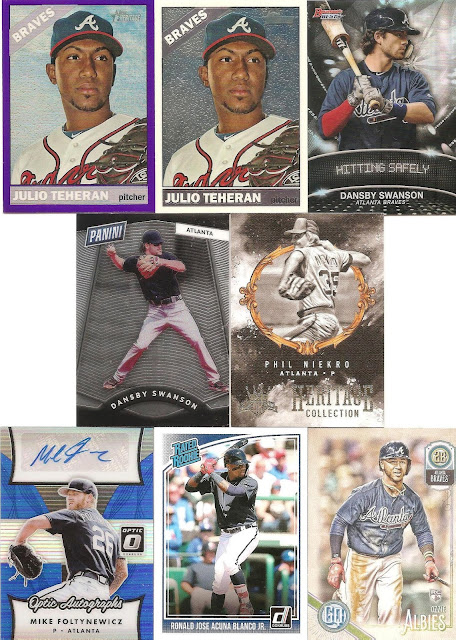 The Folty auto came from P-Town Tom. The rest were from ComC. 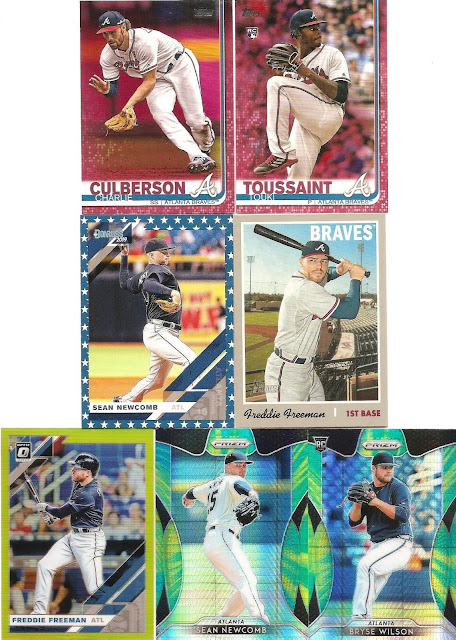 The Lime Green Freeman I opened, but the rest were from ComC.

Right again Comc. But the best card from the ComC package was this one..... 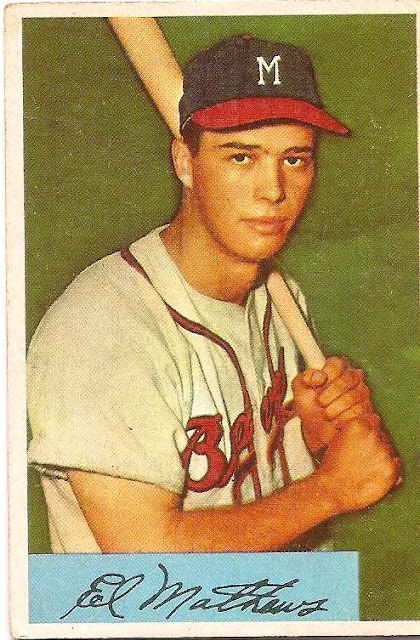 Centering maybe slightly off, but this 54 Bowman is beautiful.

It certainly felt good getting the first of the Villages card show scans posted. If I waited any longer I probably would have forgotten what I wanted to write.

Posted by Johnnys Trading Spot at 7:03 AM