Well, I've been posting some baseball card mishaps of late (this week anyhow). I am doing another tonight. I've been tearing up my PC updating. I'll be finishing up with the "T's" tonight. That leaves the V-Z's and not many players except for the W's. I think I'll coast the rest of the year with those. 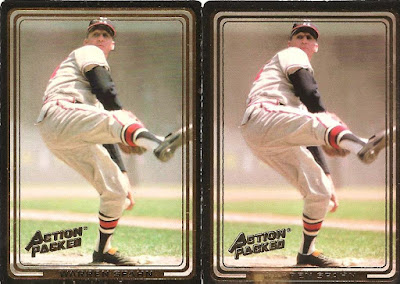 Got a Hall of Famer Brave here with Warren Spahn. These two cards appear to be the same. 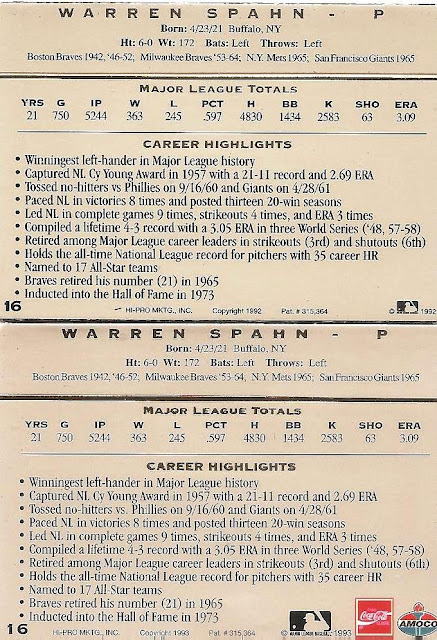 But, nope they are different. I had no idea that there were different versions of the 1992 Action packed cards.  Technically the Amoco/Coke version is from 1993, I will be ignoring that fact as I see this/that card as a parallel 1992 card. Still yet, I had no idea these existed and now I have to go back through every single card in my dupes boxes (at least 250,000 cards) worth. Not to mention every damn player collection binder, and my Braves binders too.

Wait a minute, those cards are back home (in Ocala), and I will more than likely forget all about this little "venture" by the time I get home on a permanent basis (or at least until I place this card in the Spahn binder). Let's face it I can write a sticky note like I always do, and they just hang around until I eventually throw it away.

TWO questions.....Did you know about this parallel? and What would you do?

Collecting Cutch is doing a save the boobie's contest.  check it here  Save the Boobs


Have a great night!
Posted by Johnnys Trading Spot at 7:18 PM