Seems like a relatively easy question. But it isn't. To short cut one aspect of the question, simply to say am I willing to pay "x" amount for the gum? But, I'm not talking about actual bubble gum in the general sense. I'm talking about bubble gum on a baseball card. Again cutting to the chase (or am I?) Not a gum stain, but an athlete blowing a bubble for the most part on a trading card, there are a few exceptions like obvious chewing the gum or balloon in mouth pretending it is gum. So, now am I to ask myself if I want to pay "x" amount for this or that card? Who knew that bubble gum could be the subject of a psychological brain teaser? 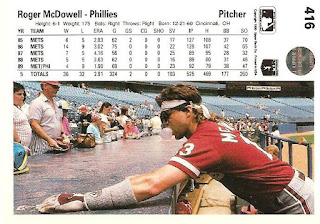 For instance how much is this junk wax card of McDowell worth to me? It is a double hit for me. He is blowing a bubble, and obviously just signed that baseball card for a fan. Side note: this card reminds me of another card for some reason. 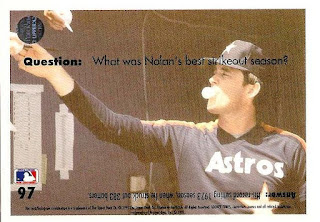 Yeah, that's the one. Again, another junk wax (really crappy set too). Same thing a double bubble and signing. Ah, but this one is Nolan Ryan and he just signed a ball. Should that matter? I think not, which is all that counts as it for my Bubble Gum Binder (and Signing Binder) and yes I have it in both, plus the set build, plus the Ryan PC. Of course most of us cardboard looney toons yes terrible pun I know would pay a penny or two more for the Ryan than the McDowell, but in reality neither one is worth very much. I can only imagine being a kid collecting the way I do today. Asking my mom for "x" amount of money so I could buy this I just have to have card, and hearing her say "Money doesn't grow on trees!" You all know that expression, don't ya?  How many of us have even said it? You see, this post really isn't about bubble gum or even baseball cards. It is really about that phrase "money doesn't grow on trees". I purposely used the word psychological. I had created this idea in my mind to get into your mind, you know mess with you make you think of some card you probably paid too much for and maybe later had a buyer's remorse of sorts. And all along what I really wanted to say we even as children knew and often told that money didn't grow on trees. Hey don't get pissy I threw a hint or two in there, LOL. But, I have good news for us all..... 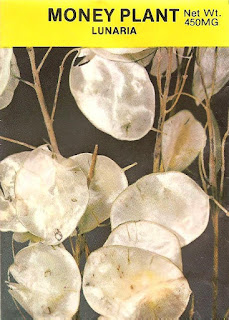 Apparently there is a money plant.  Have a great week ahead and I hope my round about way of showing off this package of seeds I found entertained you for a minute or two.