I still have baseball cards from that dealer buy out to show. I started that run of posts with a few vintage 70's that came in binders, I probably should have scanned more of them, but I was so wrapped up in what I got out of the deal, that I only scanned and posted a few of them. There was more vintage in the boxes (reminder there was close to 300 monster boxes) though. Not a ton of vintage, but definitely enough to boost or kick start my 1963 Topps which I only had 4 to start with. 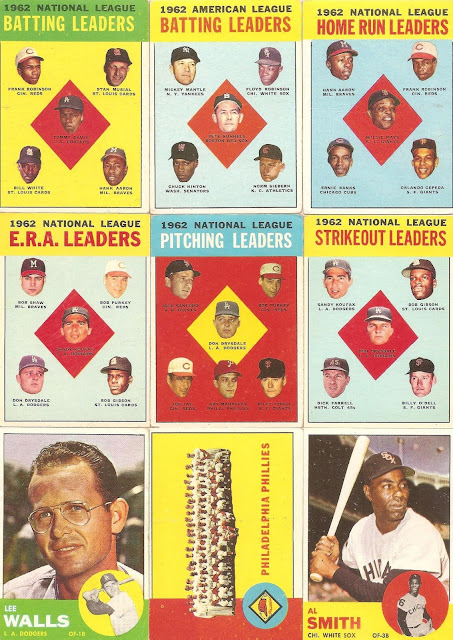 Not a bad batch to start off with. I see a Mantle lurking... Let's take a closer look at a few of them. 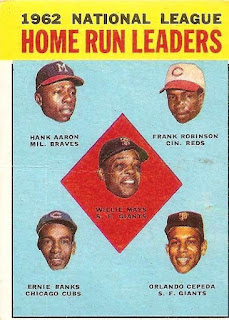 Yes, this one is creased, but I can live with it. There are 5 PC/HOFer on one card....Not to mention a Brave. 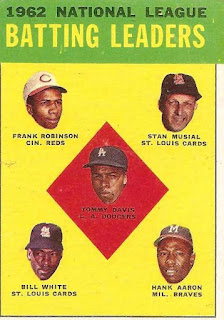 Three here, and another Hank. Needless to say these went into the Braves team builds, as did..... 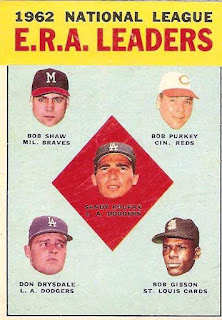 A couple more PC?HOFers and another Brave. 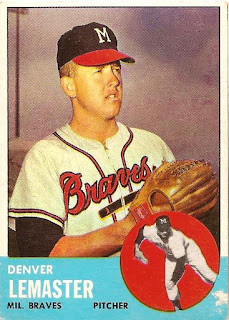 And another Braves card, still need 2 more of this one. One for the 2/25 Birthday binder and one for the set build. 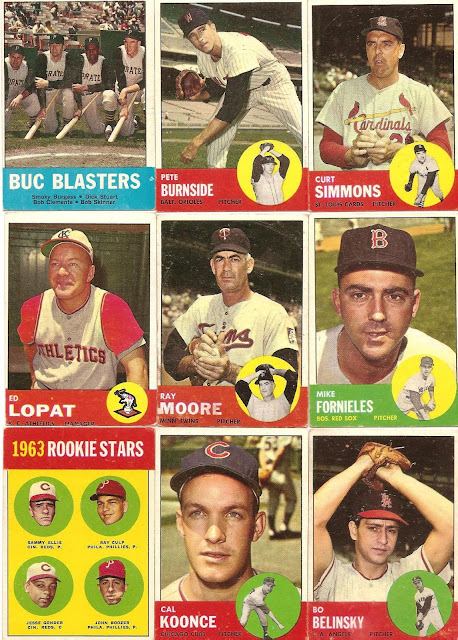 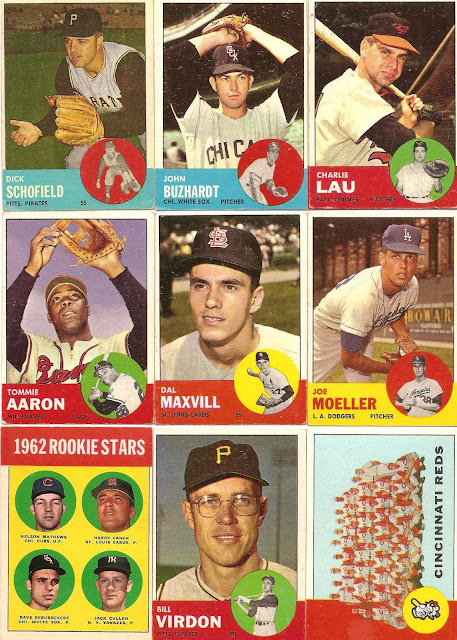 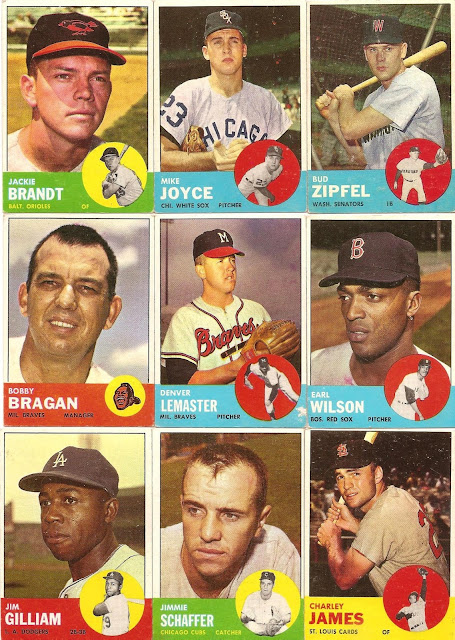 Braves Mgr. card (I already showed you the LeMaster). 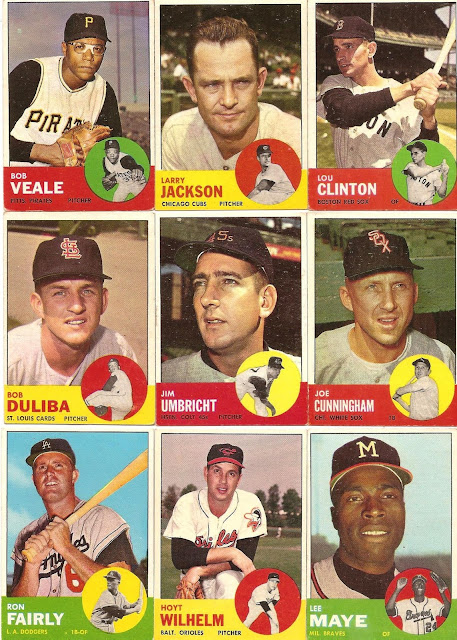 Another Brave parked next to Hoyt Wilhelm. 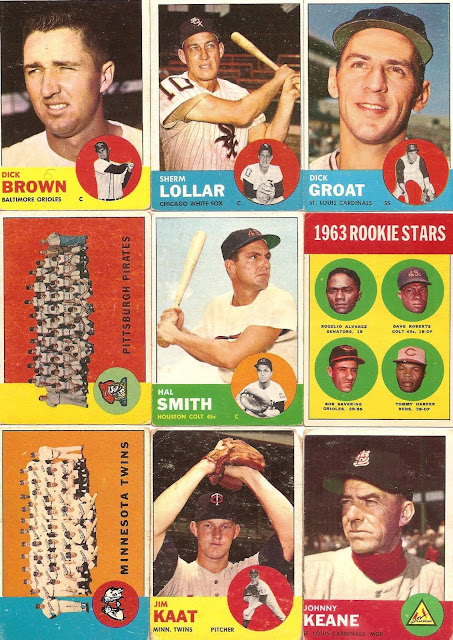 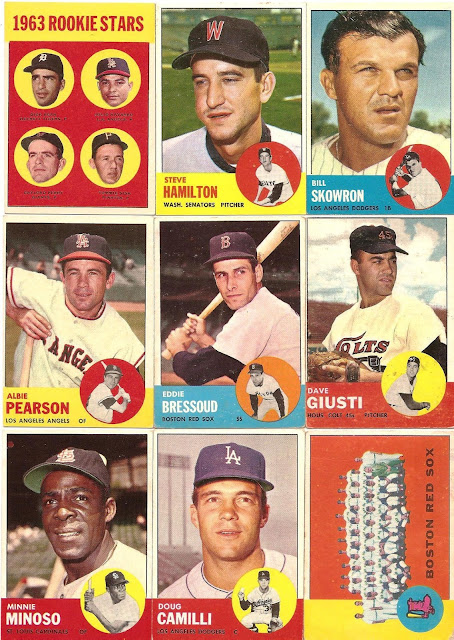 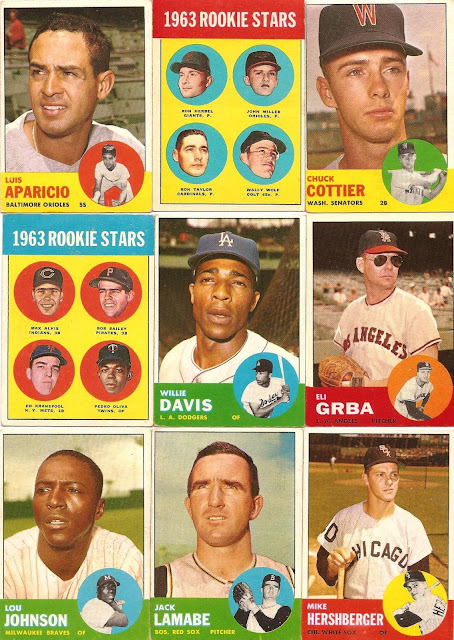 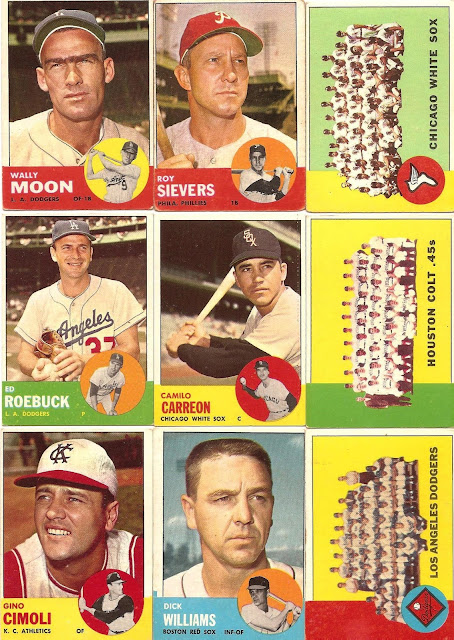 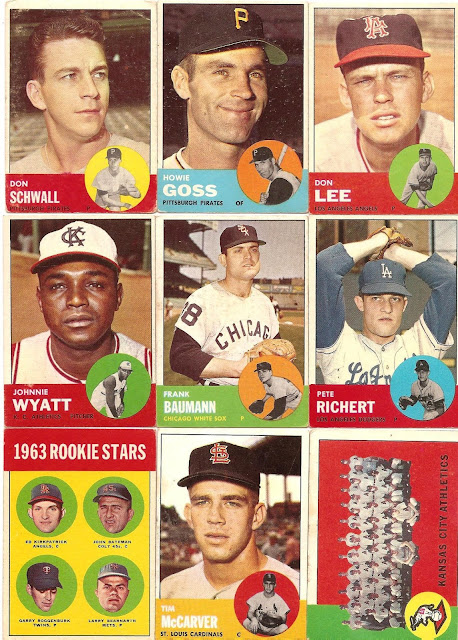 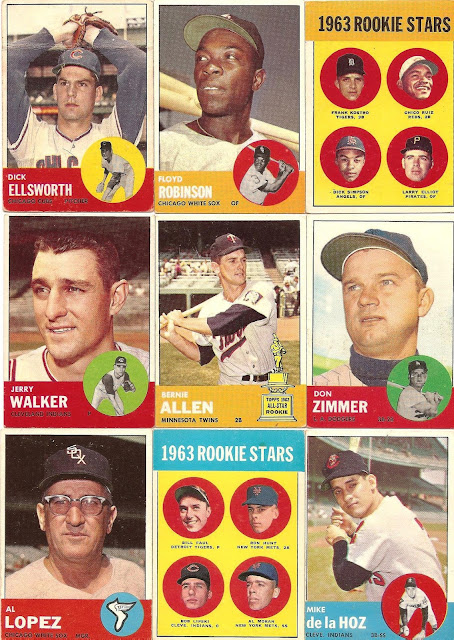 Nice a Trophy Cup sitting next to a very young Don Zimmer. 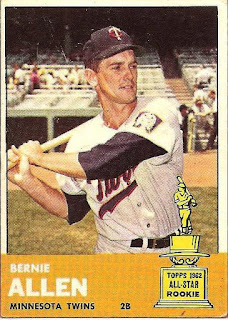 As you can see other than a couple these cards look great and have jump started my 1963 set build. There was about this many more vintage cards all together including a couple of 50s, but they too were quickly put into their new homes.

If you're bored or want something fun to do........Go back and look at all of the posts (so far) from this buy out deal and try to figure the total cost of the deal. Keep in mind there was apx. 2 million cards half of which are non-sports and I will be showing a lot of them too in the future. I didn't scan hardly any of the football or other sports. As for Football, tons of complete early 80s sets and monster boxes of dupes. I'm pretty sure Bob wound up with 5 or 6 complete 1985 Topps sets.  Lots of unopened wax (hundreds of boxes), mainly junk wax, but when you consider there are a lot of $10-20 rookies in them, not so junky. Bob pulled 6 $15.00 Bret Favre Action Packed Atlanta Falcons Rookies alone from the monster boxes.  Have fun trying to figure this one out. I'm betting no-one comes close. Believe it or not, the majority of the value was in the non sports stuff some of which I can not show here but mainly the Marvel and TV/Movie sets/boxes.  Bob has already paid me back and has made a 35% profit in 6 weeks and he hasn't scratched the surface yet. Not to mention many trades he has done.  yeah....I threw that in to confuse you.....Why? Not that this is a contest or anything, but I will be rewarding the closest to the actual total cost. Not sure what it will be, but it will be something. So Yes kind of a contest, so I give this until September 16th 2016 (my Birthday) to make your ONE guess. I'll pop out a morning post that day for everyone to drop their guess into the comments.

Posted by Johnnys Trading Spot at 10:51 AM