Yep, it came in

I mention yesterday about an Ebay win due in today. It did come in, also another package from the same OCTer.  Let's take a peek at those first. 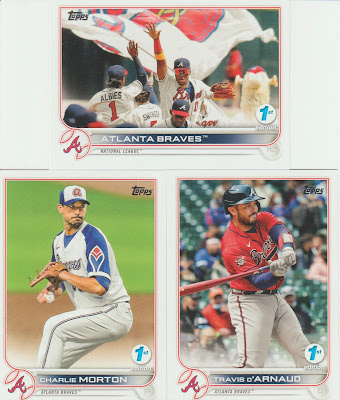 Topps 1st edition. My first of those.
Next up we have the .08 card free shipping. 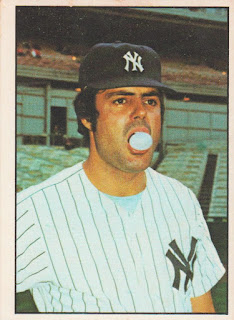 I'm sure I have this one in the set build. I was hoping I needed for my bubble gum binder. We'll see. The seller reached out immediately after the auction close, and I figured he was looking to ask me to forget about it. He did not, instead wanted to know who was my favorite team. I replied Braves of course.  Then the card was dragging behind other cards I won a week later, so I touched base, and he immediately replied no worries, and walah... 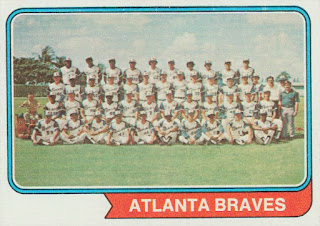 Here is the Braves card he sent, don't need it, but it is about as clean as they come.  Two Cheapie wins on Ebay, and both came through. This one with the nm bonus vintage Braves card, and the other one with the 3 day turn around in my hand Freddie.

Now for a life update. My back is about 60% better, still some issues. My uncle is in rough shape and I will explain in a minute. I so want to fire (and more than likely will) if my uncle pulls out of his current funk. I fully understand why people at their wits end kill people. I'd like to think that I would enjoy cutting this one up piece by piece. First know that I am reasonable, and also a rational person, and have no intentions of going to jail. With that said, The weekday woman spends half the day (4 hours) on her phone, totally pisses me off, so I go to my uncle and make damn sure she knows that I know she ain't paying attention to him (there are lots of things). I have been doing this about every 30 or so minutes just to give you an idea. One of the MOST important things is that he drink TWO bottles of water everyday before she leaves, Most of the time he barely touches one. This is going to kill him, he has stage 3 kidney disease (I wouldn't be surprised if he hadn't hit stage 4 under here watch. Before I hired here he was back at stage one. She sucks so bad. I could bitch about the way she bathes him, dresses him, but I think I will skip to the harsh stuff. I've told here 3 times NEVER put your hands on his shoulders and certainly NEVER pick him up that way (kind of causes pain at level 10 when your rotator cuff was torn and can not be repaired). Caught here doing that again this morning, I told here firmly to get her hands off here shoulder, and she made an excuse and I told here I don't give a damn. That pissed her off..... I don't give a damn about that either especially after yesterday morning (the biggie). You see after breakfast she rolled him into the front room where his lift chair is, and was about to pick him him up when her knee gave out. Keep in mind she is easily over 300lbs, and though hey I'm falling let me grab the arm of this 99 year old man whose skin tears just by blowing on it.  My uncle now has no skin on his entire right forearm. Damn lucky she didn't break his arm.

All of this after his brain has been stuck since last Saturday, it's a dementia thing, and he nor I are getting any sleep.  So yeah, I'm having a pretty shitty week, and I didn't even cover half of it. I've a douzie tomorrow too, but that one is on me.