I'm going to have to break up my ComC order into several categories. Here is the first one.

This ComC order is all over the place. It had been sitting/building since the beginning of the year. Well, Since January 2nd.  Turns out I had picked up several of the cards in my inventory at card shows this year like the Touki 582 Montgomery.

I also grabbed two (1 for the set build) of the TCMA Hank Aaron's, and somehow I already grabbed one from somewhere else. 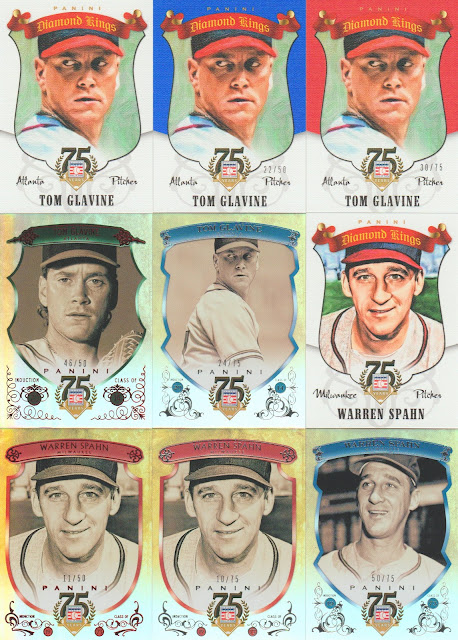 I scooped up a ton of the 2014 Panini HOF 75th anniversary Braves cards. Looking at the scan above, I probably should have placed the top row to red, white, then blue.

The parallels are crazy. For instance, the pair of Warren Spahn on the bottom row are different. One is the red frame (shield), and the other is red frame-red. That is really bad, but I do like the cards. Same deal with the Eddie Mathews on the top row. I slipped in the 1977 Dover reprint Ted Williams. I'll stop here for now, and bring the next grouping on Wednesday. Tomorrow is Flag Day, so that post is pre-determined and takes priority.