I really screwed up all around. First, I broke my own rule technically. After the skin tear on my uncle's arm Monday I knew I had to get some more supplies for that kind of thing. I planned to head to Wally World Tuesday after the nurse came to look at the arm. She provided me with plenty of supplies, but I still needed to get my uncle some desserts.  I didn't know he was going to get back in the funk he had been over the weekend. It was obvious in the morning he was heading there quick. I left around 11am and returned at 12:30 which included a stop by a country buffet to get some regular food for a couple of days. I guess it only took me 1 hour to screw up, but in reality it was like 5 minutes.

You see the first thing I always do is go to the card aisle, always. Even though my rule is not to buy any retail blasters, other than Chronicles (in the recent past). I don't know why, it's just what I do. There weren't any new baseball boxes there other than some 2021 Prizm Draft Picks. That was a quick nah. However, there were a rack box of hanger packs of 2022 Diamond Kings. I said hell why not. I did nearly buy a Hobby box online for $85.00 but then I didn't. I told myself (rationalization at its worst) I've had a rough few weeks, especially right now. There were 15 of those packs and I took them all. I did some quick math in my head thinking these are like 5-6 bucks each and said okay that is like the hobby box I passed on.

I did my shopping was checking out and put the cards at the end, very last. I had the need to replace our outdoors oversize heavy duty chairs we sit in when my uncle is outside, yes you guessed it (maybe), she busted them. Anyways, I knew the grand total was going to bit a bit higher than the already inflated prices. Because of the chairs I was organizing my grocery items as per my usual, just taking a little longer. I got done and realized the clerk was ringing up the last pack of cards. So I watched it pull up....

$15.98, Holy Shit, pretty sure I said that out loud, because the customer behind me said yep they're expensive these days. The clerk was looking at me, and I figure she was wondering if I was going to tell here to take em out. I said to her, just let it be.

Well, you will all need to suffer with me somewhat. I'm not building the set but I only came up a few short including one Braves card that wasn't even an SP, just a rookie. 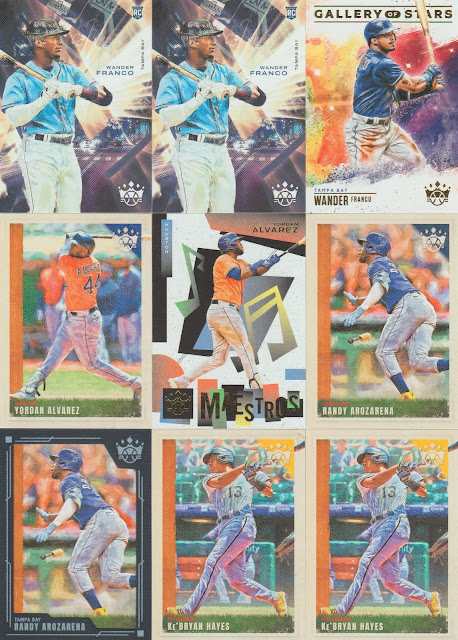 These were the best "sort of hot cards". 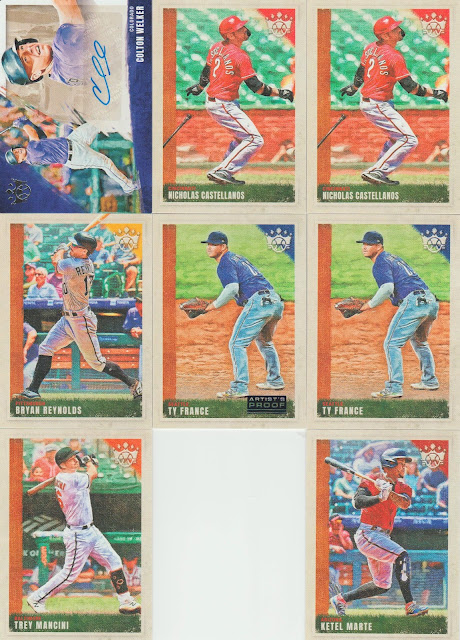 An auto of someone I don't know. The rest are get this...... SP's. These are just the SP's I am not keeping other than the parallel France. The SP's this year are base cards numbered 101-140. No idea why some players were chosen for those numbers. 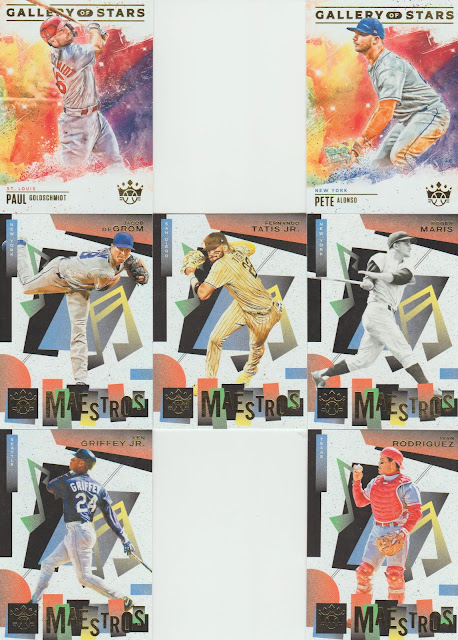 Here we have inserts of PC guys. 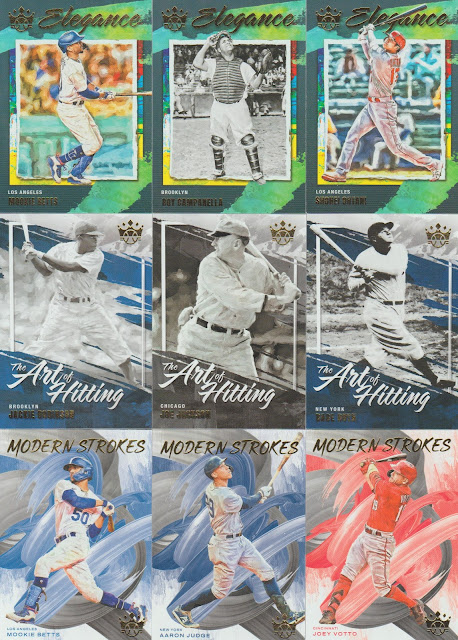 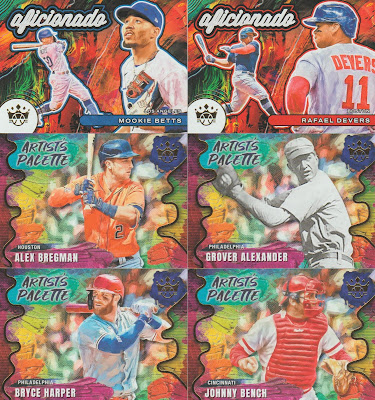 So there you have an overall picture of what the product is this year. I wound up with about 2 dozen total cards that don't fit into any collection, so they are already sitting in the dupes boxes.

I scanned the keepers, and will post them over the next few posts. I did not scan all of the rookies, and there were a ton. If I ain't heard of them, or just didn't pay attention they go into rookies boxes, that who knows one day I'll find a retirement nest egg, lol.