I picked up a 3K box of junk wax last weekend for $2.00. I pulled out a few for traders and a couple hundred of some dupes for the Hall Worthy Binder. That's also where I snagged those Princeton Reds cards I mentioned the other day. I really didn't spend too much time rummaging through the cards. I did find some 1985 Braves Hostess cards which were pretty cool. I may have spent an hour scouring the cards, but a few did "stand out". Wacky ones that is. So I felt the need to pull out an old theme post. Some of these more than likely made an appearance here before, but they got noticed once again. So for now we have our regular Wednesday posts. They will be short quick posts. 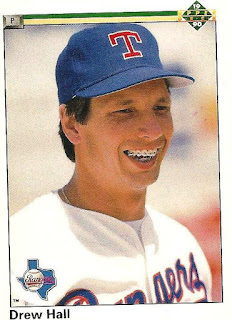 The 6 scans today all hail from Upper Deck.   The Braces on a baseball card got me on this one. 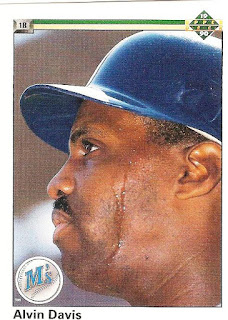 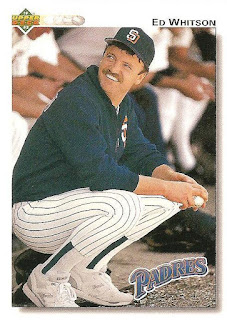 Tennis shoes, in the dugout. 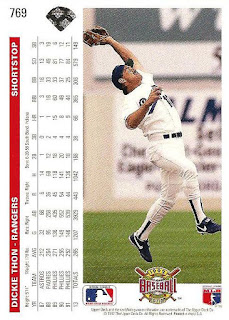 Pretty sure this eyes closed catch made an appearance before. 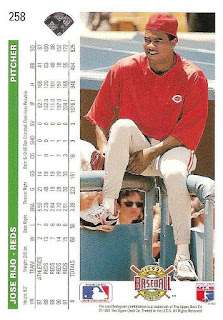 Now at first you might say, oh tennis shoes again, but I didn't catch that until after I pulled it out for the odd seating, and also after I noticed the girl between his legs and wondered why she was in the dugout (maybe a bat girl???). 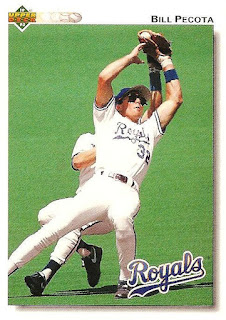 Finishing off with an oops shot.  I said they'd be short. Every now and again a quickie is a good thing.

Posted by Johnnys Trading Spot at 9:14 AM