Who wants the Griffey Box?

Seriously folks, doesn't anyone else collect Jr? There are some great cards in this box. I am holding off sending several "boxes" to fellow traders until I have the next Griffey recipient, so that I don't have to make a special trip just for that 1 box. How's that for laying some guilt on y'all. Someone, please speak up. I haven't heard from TJ yet.

I wound up pulling over 150 cards I needed out of that box, and replaced them which means that box is jam packed full. 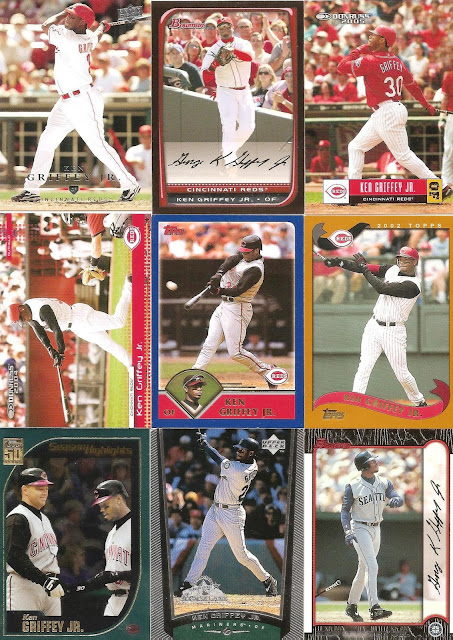 The first 18 cards you see here were for my set builds that were missing Mr. Griffey. 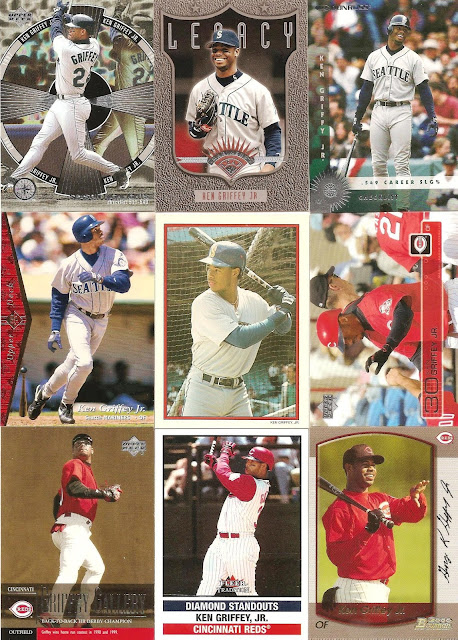 I actually pulled 19 out for those. No sense scanning 1 more card when there are over hundred more to show y'all. By these cards being needed in my set builds meant they were also needed in the Griffey binder and fortunately several of these had multiples. 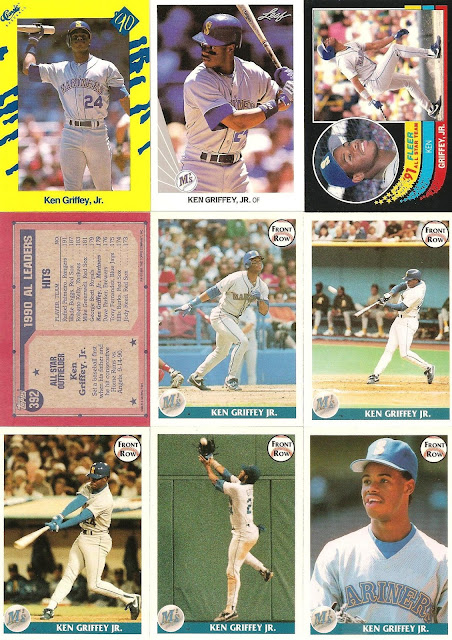 That's do cool a 1992 Front Row cards, I replaced them with cards from 1991 Front Row. The reason that 1991 Topps card is backwards is that is a blank front. I have no idea why I didn't already have some of these cards (in the binder, I knew I had them in the sets, but some of these....Jeez I didn't even know I needed them. 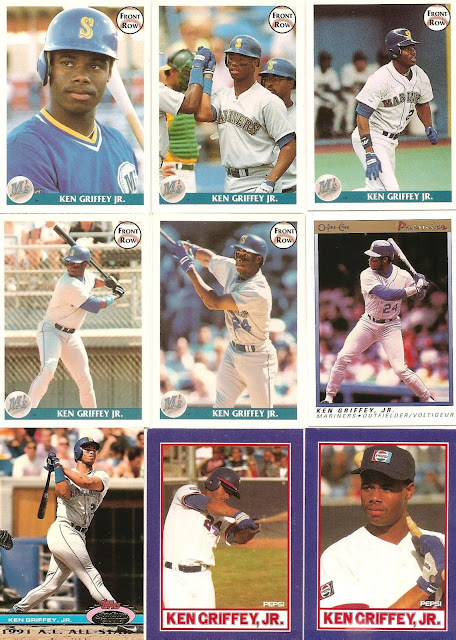 A pair of Pepsi cards. Again the other two non Front Row cards I should've already had, but didn't. 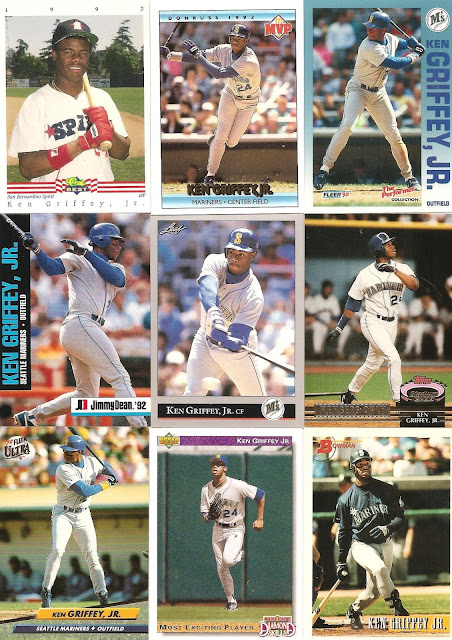 Several of these I know I have in the little sets that I will be ripping apart later this year. That 1992 leaf is the PREVIEW card, cool. First time for me seeing that 1992 Donruss McDonalds card. 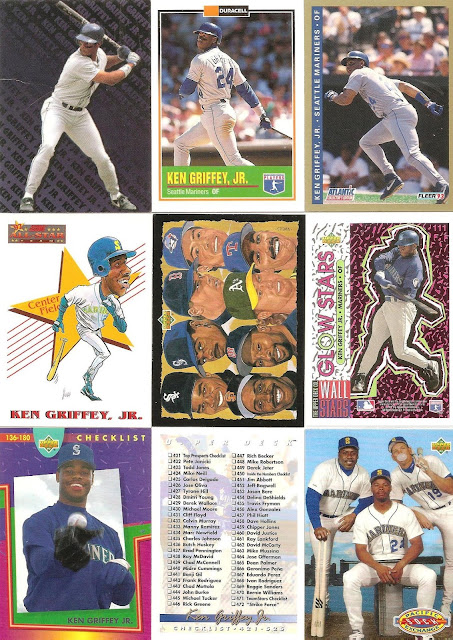 Yes, I did have that bottom right Upper Deck card already, but I didn't recognize (remember) the "sock exchange" wording. You see I went through this box the first time without looking at my lists not expecting to find many cards. Going off of memory I pulled 151 cards cards! 4 (really 5) turned out that I had them, so I would say I did pretty darn good from memory.  I should have had most of these cards in the Binder already. I must have assumed they were there and threw them in the dupes boxes. A ton of junk wax cards that I know I've had a hundred of each grace my hands.

My favorite card above though is the center piece. I need 8 more of that card now, as each of them are PC guys, and of course the set build. This was the first time seeing that card for me. 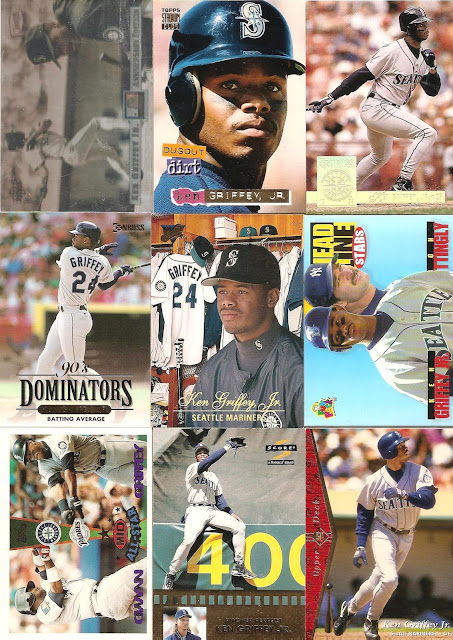 Inserts a parallel, and odd balls galore, except for the SP and Studio. 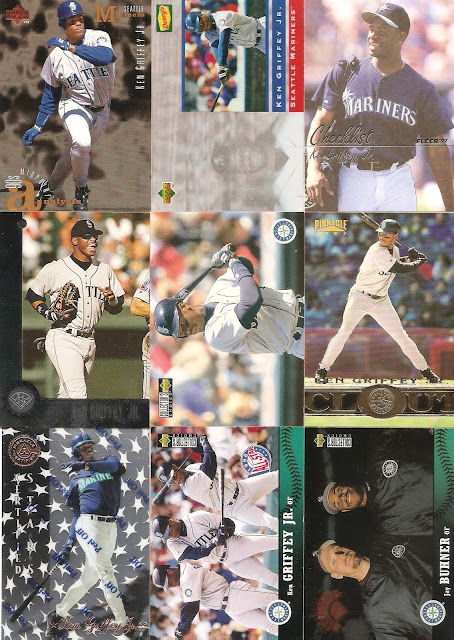 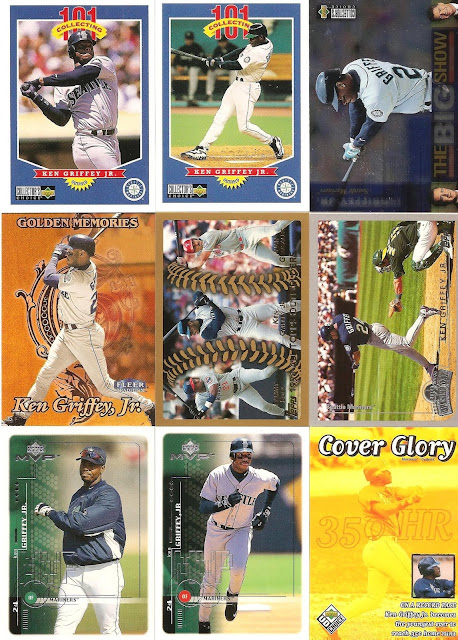 At one time I had all 45 of the 1997 Collector's Choice The Big Show, and their World Headquarters counter parts. That was one tough insert set to put together! 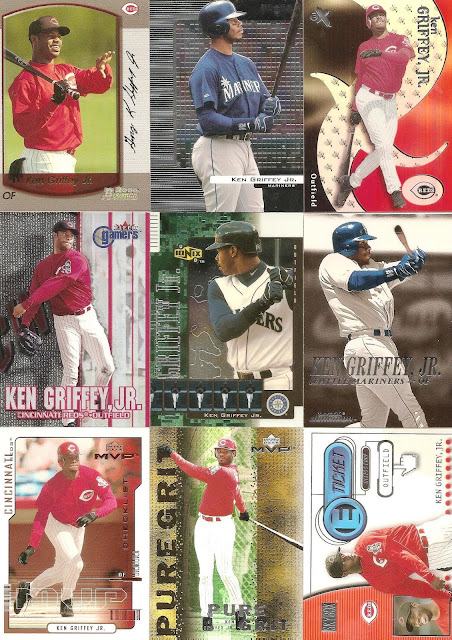 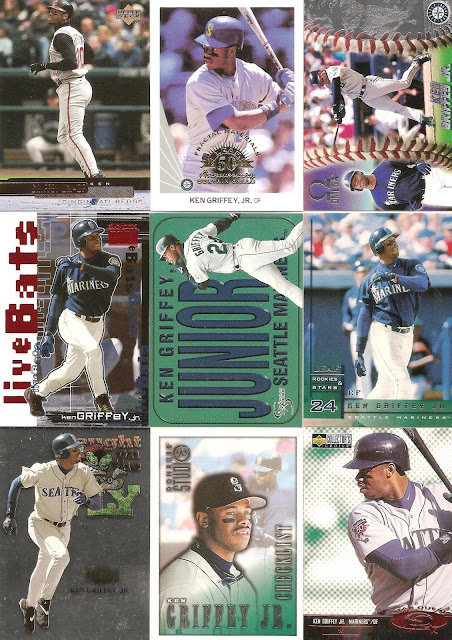 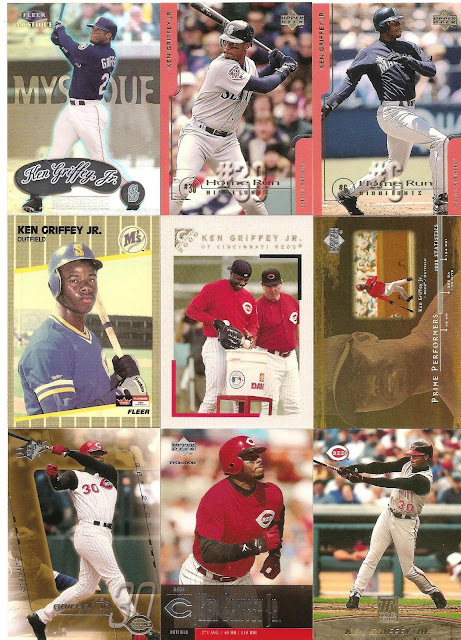 As you see we've made it to this Millennium. 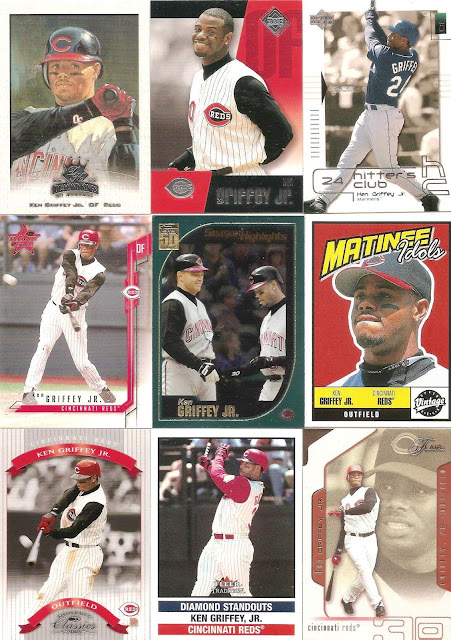 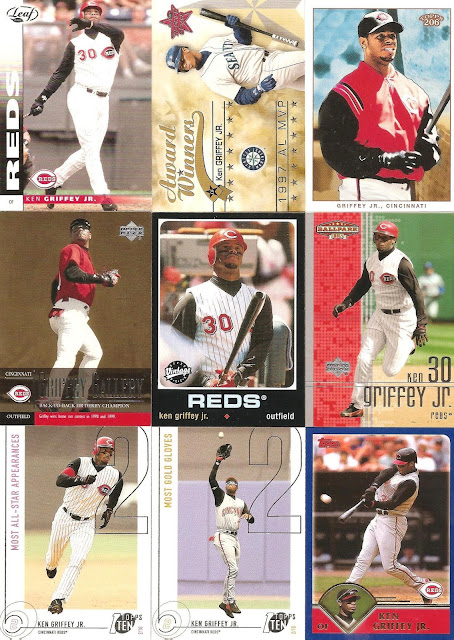 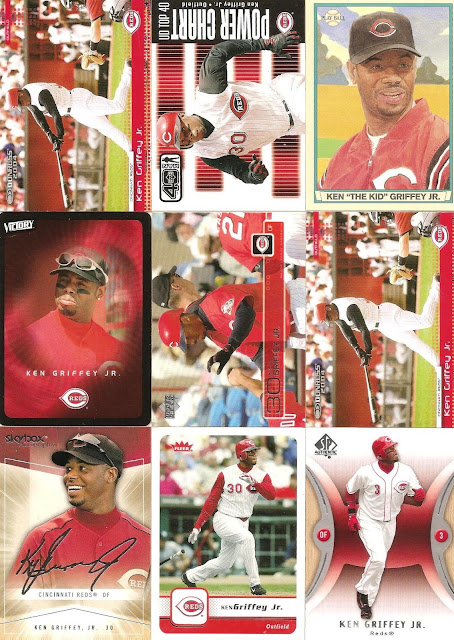 I see now that I need to get an extra Jr. card of him wearing the #3 proudly for one of those "Franken Sets" that I've been stock piling cards for 4 years. I have about 5 Franken Sets not bindered yet, plus the 2 I do have bindered. Well, let me rephrase that.... I do have a couple of binders (of the Jersey Numbers) I started showing the the first 2 pages of each number a few years ago. 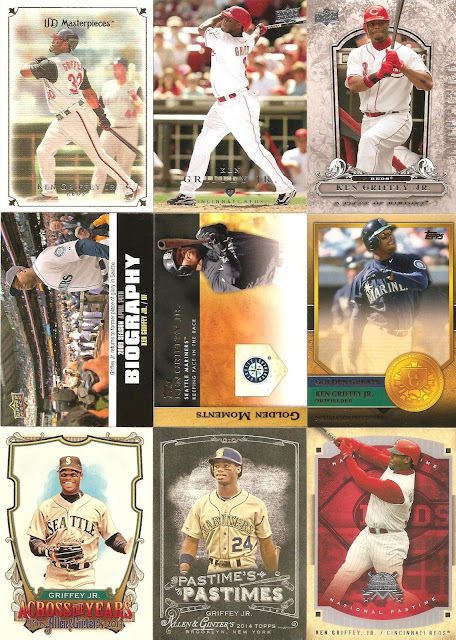 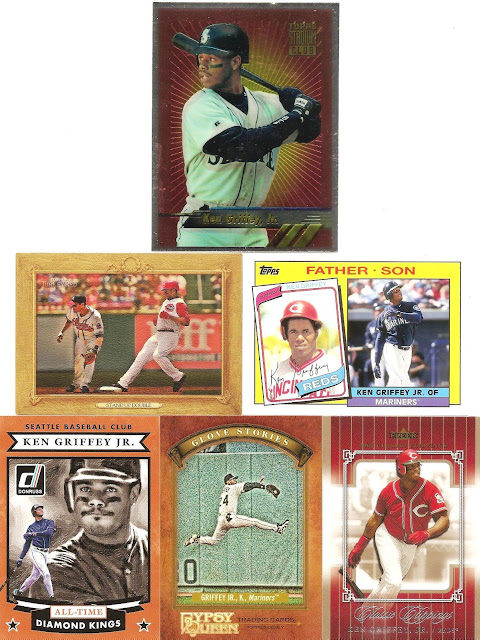 Getting onto Today's world of cards. And wrapping up my pulls with some customs from a couple of our celebrity custom bloggers. 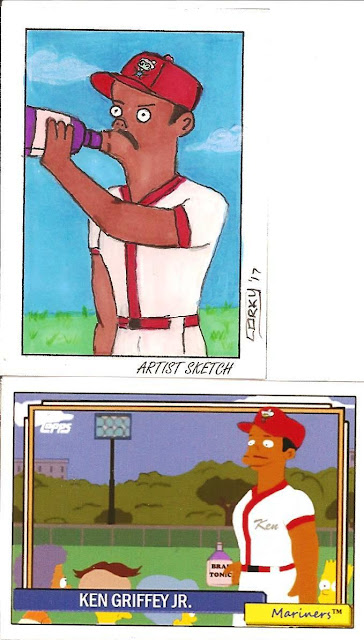 A pairing from Corky. 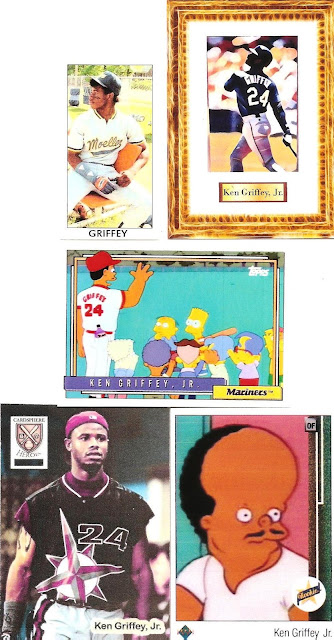 Five from Gavin. The 2 custom Simpson like 1992 Topps will look good sitting next to each other.

Thank you TJ for starting this GREAT GRIFFEY GIVING BOX, Thank you Mark for sending it to me, Thank you Corky and Gavin for the customs you created for the box!

All in all I came out with 19 cards for the set build, 126 cards for the Griffey Binder, and 6 I pulled for other mini collections. 151 cards total. Which is funny because that was how many I pulled the 1st of the 3 times I went through the box, of course I had to put back 5 of those originals.


That's all folks! Have a great night!