Before I get to the different stuff, let me just say How great the Friday Big Fun Game went last night. That is what I was talking about. It even got a late(r) start, close to the 9 pm deadline (8:58), had 2 steals, and everyone showed up and we were done by before bedtime. Completely done   YIPPEE!

I also want to re-iterate my original commitment post to doing this game, smaller  varied prizes (and fewer players) should lead to some inter-player trading, and that has happened, so YIPPEE on that front too. Great Game and thanks to all of this weeks participants. I will be putting next months sign up in tomorrow. I will be looking for 20 (twenty) players again that will be split up over each Friday for the month of April.


Now, to the something different.

Several years back before I came up to Valdosta, GA. I had a trading buddy in Macon, GA. He is another John, but goes by TEE. He reached out last week, let him know I was a bit closer, and BAM, I got a box yesterday from him. Without further ado........It's TEE time: 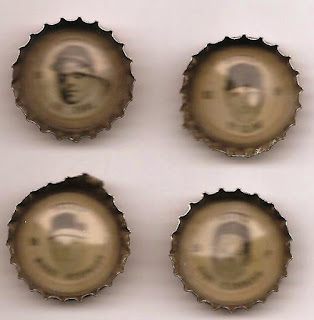 1968 Coke caps, these 4 Braves can join the lonely Hank Aaron cap that I have. Not your everyday mail. 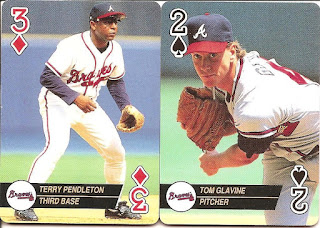 1993 Baseball Aces. I did already have the Pendleton, but needed the Glavine. In fact Tee sent the sealed deck, complete. So about 45ish cards for the PC too. 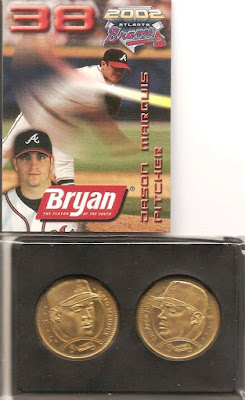 I previously had just 2 of the 2002 Bryan Braves cards, now 1 more. I already had an Andruw Jones coin from 1997 Pinnacle mint, now the base set is complete with this Maddux and Chipper. Of course there are several parallel coins including solid silver and real gold plated coins, but it is unlikely that I will ever own those. Tee also sent the Smoltz can from Pinnacle Inside.

More oddballs.
1993 Cracker Jack of Fulton County Stadium.
A pair of 89' Topps sticker backs ( I already had the Zane Smith but needed to cross it off the wantlist).
And an 87' Topps sticker with Oberkfell.


All in all definitely different. Great stuff, thanks Tee! I hope your reading this.

Posted by Johnnys Trading Spot at 9:56 AM