No, not about a man named Jed although I am sure there were 1 or 2 with that name involved.

Over the last month I have been scanning my butt off. Not literally of course, just bindered sets. I am trying to get everything I can scanned and uploaded to those new blogs before THIS version of blogger goes away on the 24th.  I hit it hard starting with what we used to and still do for the most part call JUNK WAX. We've done this not because the cards were junk cards, but simply because of the over production by all of the manufacturers which ultimately reduced the MONETARY value of the cards to a mere nothing. I specify monetary here for a purpose which I will explain shortly.

Most of us don't wake up in the morning and say.....hey I want to flip through my 1988 Topps binder. We just don't do that. It is WRONG. You see, I thought that I often looked at my Junk cards. What I found is that I have had those sets primarily 1985-1990 doubled paged already sitting in binders. Now, I don't like doubling the cards in pages. I like to see the backs. However, back when these cards were put in binders that was not my concern. I've never changed them they are still that way. Sure it saves money, but I NEED to see and read the backs. I didn't change it when I scanned them so it saved me time too, but now when viewing those sets you can't see what the card number is. Another point about these particular sets mainly the 86-89 sets is that the binders themselves are made just for those sets. 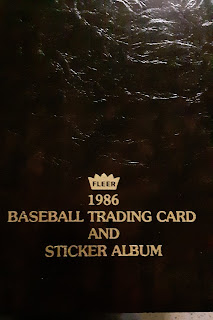 The front of the binder view for 1986 Fleer. 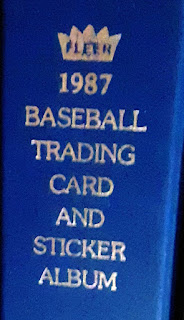 
I love this, but not a serious issue for the other sets. Let me dig in to what I eluded to earlier regarding that it is WRONG not to pick up those sets and look at the cards. Many reasons.

1). If you don't flip the binder pages they will compress together which was evident that I hadn't flipped those pages in decades. Shame on me.

2). There are a boat load of GREAT cards. I would show you some here, but I really want you to break out your binders/sets and LOOK at those cards.

3). As usual you will see things that you never seen before. Granted, some of those are simply we just flat out forgot about those little things. But it is so great to see and remember them again.

4). I had the ABSOLUTE best time going through my 1985-1990 card sets. Just as good as opening up some 2020 Stadium Club. Seriously, the same enjoyment that we will be sharing as soon as they hit the shelves. But these cards won't cost you anything (especially not your retirement account) because you already have them.


JUST GO LOOK AT ALL OF THE SETS.
Don't give up after a few pages, or sets. Go look at them all every single card. You will enjoy it, there is just no way NOT too.

Now, for the other stuff that has been going on the last few weeks. Lightning struck my neighborhood and also took out my well back home last weekend. SUCKS! I could go on about how difficult it is getting things done from up here....I won't. I tried to let my daughter's boyfriend have a crack at fixing it. He gave up, and I drove down (and back) on Monday replaced the shattered plumbing, replaced the check/pressure valve and contacts. Didn't work, I knew then the pump was out too. I had to call a well company, call my insurance company. No one could come out on Monday. Came out Tuesday after I was back in GA. I was right, the pump was DEAD. Problem....there are a half dozen trees in front of the well that will have to be removed before they can do the repairs. 3 Days later still can't get a tree service out to provide estimate. Insurance company flat out told me that if lightning didn't strike the trees they would NOT cover removing them even it the repair can not be done without doing so. Actually suggested that I encourage the tree people to say it was lightning. OMG. Lying is now okay with an insurance company? WTF. Lying is not okay, I won't do it. Even if lightning hit the trees (I really don't know if it did) the insurance would only pay a partial amount of any estimate. UGH. The pump replacement alone is $1500.00 plus any additional work like replacing the tank, and pipes etc. $1,000 deductible. CRAP. The last time lightning took out a well of mine was in 1995 and my deductible for that was $100.00. I haven't changed my coverage. This is the lowest deductible they allow now. WTF.  Anyways, this is now my 2nd claim in my life on my home owner's policy, both lightning taking out my pump (25 years apart).

Moving on..... Here in GA, my main caregiver (besides me) for my Uncle has been out all but Monday when I went to FL. She has been ill off & on all year. They are now looking at Lupus as a cause for a lot of her issues. They also hit her with Narcolepsy, and sleep apnea.  normally, she calls and lets me know each day that she won't be in. I haven't heard a word in 2 days. No replies to my inquiries to her.

Wow! that is a lot of not good stuff. Let's get to something NOT so bad. The first time I GOT the internt was back in 1995. It was dial up with AOL. (an account I still pay for BTW). Everyone says why are you paying them. You can keep your e-mail. No I have tried to cancel it several times, and NO they will not allow me to keep my same e-mail address if I switch to a free e-mail. Why I don't know, they did for a sister. Not me. I can not change my aol e-mail acount as that would require me to manually change my e-mail with every health insurance and financial services company in America. Well, just the ones that I have written business with and that is a few hundred. I can not and will not attempt that. Even thinking about that for more than 5 seconds gives me a migraine. OOPS, off track, internet.

That has all changed now. I now have Internet and cable here in GA. I did this (well the cable company did) on Monday while I was in FL. Anyways, I can now upload download images much faster than with my phone's hot spot. I am hoping that I can get those sets scanned up before the 24th. This was my only shot at it. At least the completed sets. With that said. I have already added MORE sets to the Fleer, Leaf, OPC, Topps, and Bowman. By all means go check them out. you will be surprised that you might stumble across a card that fits into your mini collections, or team sets that you missed. I haven't started putting my Upper Deck into binders yet, other than the 1989 set which has been done for decades now. I have a long way to go to get Score and Pinnacle done as well. Don't let me forget about Stadium Club either. One day I'll have those scanned up too.

Who needs books? When you can read the card backs, especially some of those Did you know statements on the card backs those are great! Of course the cards I uploaded these last few days don't show the backs, but many of the scanned sets I already did do. Plus, the sets that I will be scanning moving forward. I also want to say regarding all of the work in scanning every flagship set that I have and get can be boring sitting there scanning page after page after page. I will say this though I have come up with several ways to occupy my MIND while waiting for the scan to complete. May ways:
1) there are several ways in which you can play Tic Tac Toe: 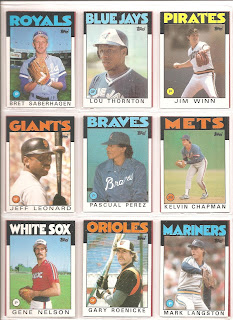 One way is to use colors (this can be done on front and on some sets the backs too. Even with secondary colors are many more recent sets. Above you can see a BLUE tic tac toe from top left to bottom right diagonally. 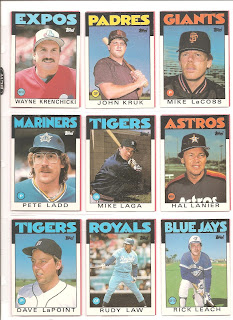 Here you see the colors again BIG TIME 3 wins. You can also use player positions. The Pitchers dominate this no matter how you slice it up, but I go with the pitchers, the infielders, and the outfielders with the catchers. Any MGR or DH are considered wild cards. This can be quite fun.


2) another thing you can do while scanning is to pit back to back pages for either PC guys, or what I call FF team guys. Former or future Braves in my case, not in Braves uniforms. This is the fastest and works the best between scans. There are several other ways to attach points to a particular card as well.

Well, this has been long enough. Check out my other blogs, give them a follow.